Hold Israel accountable for its misdeeds 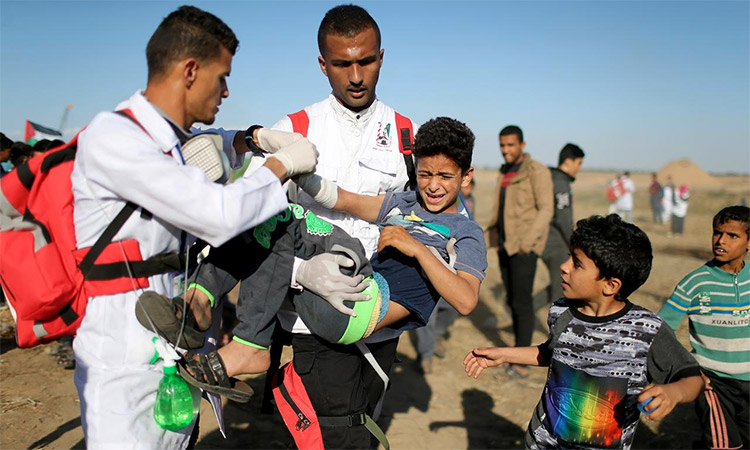 A wounded Palestinian boy is evacuated during a protest at the Israel-Gaza border fence, in the southern Gaza Strip. Reuters

He was forced to meet Palestinian and Israeli human rights organisations, and government and UN representatives in Amman, because Israel, the occupying power, once again refused him entry to the Palestinian Territory.

Over the course of the week, the Special Rapporteur heard about shrinking civic space and the difficulties faced by human rights organisations in carrying out their work.

Baseless attacks on the credibility of human rights and humanitarian organisations and moves by some states which curtail the organisations’ ability to carry out legitimate and essential work is of great concern, as Lynk points out.

Concerns persist particularly in Gaza where the human rights and humanitarian crisis is especially dire.

The situation is so bad that Palestinians seeking redress through the Israeli legal system face a multitude of obstacles such that ultimately justice is elusive and largely impossible to obtain.

Ongoing practices related to detention, including the use of administrative detention, and detention of children, are also issues of serious concern.

The rapporteur heard about the situation of children placed under house arrest and the strain this puts on parents and particularly mothers who often have the responsibility of being the primary caregiver and thus primary enforcer of house arrest for their own children.

He was also informed that children might be sentenced to house arrest or detention after confessions given under duress, and that at present more than 200 children were being held in detention.

Israeli settlements are considered illegal under international law and major obstacles to peace since they are located on land meant for Palestinians’ future state.

In what can only be seen as a snub for the international community, Israeli Prime Minister Benjamin Netanyahu pledged on Wednesday not to dismantle even the remotest Jewish settlement in the West Bank.

The UAE, on its part, has been continuing to support the legitimate rights of Palestinians and also donated $130 million as part of its humanitarian aid efforts in 2017-2018.

The UAE’s additional contribution to the the UN Relief and Works Agency for Palestine Refugees in the Near East, UNRWA, in 2018 amounted to over $50 million, making the UAE the sixth largest donor to the agency for that year.

This contribution has helped maintain the agency’s educational programmes for hundreds of UNRWA schools, as well as the agency’s health and food programme.

In addition, the UAE contributed $2 million to finance fuel for power stations, which support hospitals in the Gaza Strip and provided $364 million through UAE aid initiatives in humanitarian, development, and food assistance to Palestinians during 2017 and 2018.

In a statement delivered by Obaid Salem Al Zaabi, UAE Permanent Representative to the United Nations, during the 41st session of the Human Rights Council, the UAE affirmed its support for the peace process in the Middle East, with the aim of achieving peace and stability in the region.

As Al Zaabi pointed out, Article 7 guarantees the accountability of Israel in terms of its human rights violations against Palestinians.