A gruelling long wait for migrants seeking a better life 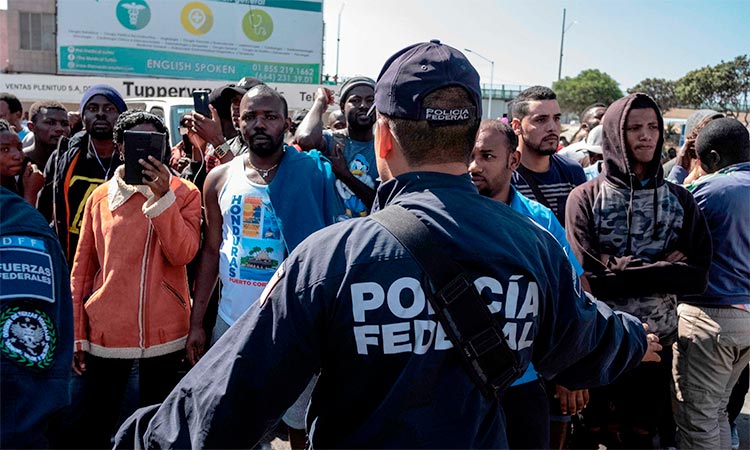 A group of asylum seekers wait for a negotiation commission to walk out of El Chaparral port of entry during a protest in Tijuana. AFP

The wait list for migrants in Tijuana to request asylum in the United States has grown to the longest it has ever been, even longer than the line that grew right after a large caravan arrived in November.

About 9,150 names are pending on the list, according to data documented by volunteers with Al Otro Lado, a legal services nonprofit that supports migrants in Tijuana. The people to whom those names belong have been waiting upward of three months in many cases for their turn to ask the US for protection at the San Ysidro Port of Entry.

Those at the bottom of the list will likely wait much longer if the current trend continues. “We come here every morning,” said one man from Cameroon who was waiting by the port of entry on Tuesday. “Most of us, we sleep on the street. We have no food. It’s difficult for us.”

The asylum line in Tijuana has been in place in one form or another since at least December 2017 because of a US policy called “metering” that limits the number of asylum seekers that border officials will accept at ports of entry each day. Early every morning, people from around the world gather near El Chaparral Plaza to hear numbers called from the wait list.

Mexican immigration officials with Grupo Beta, the agency charged with migrant protection, communicate with Customs and Border Protection officers on the US side to determine how many numbers to call. They, along with a group of migrant volunteers, are responsible for the list.

While the number of people taken by CBP for processing per day in January averaged about 42, that dropped to about 24 people per day in June. So far in July, the average has been just under five people per day. For six out of the nine days so far this month, Grupo Beta has told the anxious crowd that no one would be going in.

CBP did not respond to a request for comment on the situation in time for publication.

The wait list’s length peaked toward the beginning of December at a little more than 5,200 people as members of a migrant caravan that drew the ire of President Donald Trump made their way from their shelter in Tijuana’s Zona Norte to sign up. In the months that followed, the wait list dropped to as low as 2,110 people at the end of January before growing again to its current record high.

Many of those waiting to hear numbers called on Tuesday were from Cameroon and Eritrea, a change from the Mexicans and Central Americans who had previously been the largest groups in line. “There’s genocide going on in our country,” the man from Cameroon explained. “We have to seek refuge.” He, like many asylum seekers, did not want his name published out of fear of repercussions either in the US or back home.

He and his comrades said that as migrants, they’d been harassed by police, and the 20-day passes that Mexican immigration officials in the southern part of the country had given them to pass through to make their claims in the US had long expired. That meant they were in danger of being kicked out of Mexico, they said.

They alleged that some people sold numbers in the line for as much as $1,000. They also alleged that Mexican immigration officials were taking people out of order in exchange for bribes.

After a Grupo Beta official told the crowd of about 250 people waiting on Tuesday that no one would be going in that day either, some of the group decided to block the entrance to a government parking lot in an act of civil disobedience to make their grievances known.

“People come here every day, and they say, ‘Manana, manana,’” said one man from Cameroon, using the Spanish for tomorrow that Grupo Beta officials have echoed for months to waiting asylum seekers. “I, for one, my money is finished. I don’t know what I’m going to do. It’s bad.” A woman from Cameroon who participated in the protest said she’d already been living under a bridge for a month after her money ran out. She alleged that Spanish speakers get preferential treatment from the Grupo Beta officials.

“There’s racism and discrimination,” she said. “When you bring your problem, no one listens to you.”

Another woman said her number had been called about a week and a half ago but that Grupo Beta had then said that not all of those called would be able to go in. Some would have to wait until the next day. That next day, they called other people. Now she’s still waiting, and her number has passed.

Meanwhile, members of the Tijuana police as well as Mexico’s newly formed National Guard began to assemble in the area. Mexican immigration officials attempted to inch forward in vans on either side of the protest group, but the people would not budge.

Another Grupo Beta official came out to speak with members of the group to try to quell the demonstration. He dismissed the allegations about bribes. “I’ve been here every morning,” he told them.

The official declined to speak to the growing group of media clustered around the parking lot entrance. Many of the migrants said they didn’t believe him, calling him a “liar” and part of the “mafia.”

Eventually, he took eight migrants from the group inside the port of entry to negotiate. While they were inside, a group of about 20 Mexican federal police formed ranks in the parking lot a few feet away from the protesting migrants.

When the group returned, a man from Cameroon addressed the crowd. They would make a list of people whose 20-day passes had expired, and officials would renew them, he said. They would also appoint a rotation of monitors from among the Cameroonians and Eritreans to ensure that the people going into the port of entry for processing were the people next on the list.

Mexican officials also promised to ask CBP to take more people and would report back to the group about the US response, he said.

Then, he asked the group to move out of the way. “We are not here to create problems but to create awareness,” he said. “Our questions have been heard by officials.” The group moved, for now.