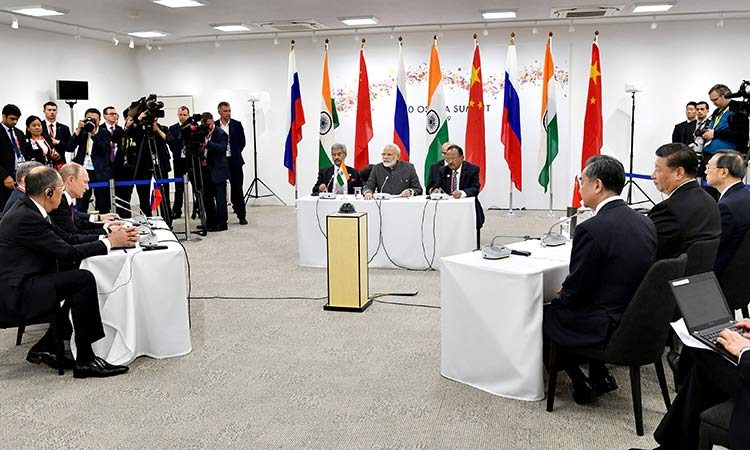 With India, the largest democracy of the world, rapidly rising to its potential as a global player during the Modi regime, its natural placement in the international arena is attracting the limelight after a long period of survival without shine. The hallmark of this is an implicit acknowledgement by the world powers that India stood for sanity in global affairs.

Three things have helped to establish this image for India — all to be credited to Prime Minister Narendra Modi. First, he sent down a clear message that India had shed the ideological baggage of the Cold War era and would bilaterally strike friendship with all on the basis of mutual economic benefit and shared security perspectives. Secondly, he showed an uncanny understanding of Knowledge Economy in projecting India as one of the largest markets of the world that was available to others for equitable offers. And, finally, he convincingly presented to the world an India that was committed to ‘nation first’ but was otherwise totally pledged to working for global peace and development.

It is his personal integrity, belief in India’s higher values as a nation with a world view and an intrinsic boldness about dealing with an external threat to national security, that together made it possible for him to develop upfront a remarkable personal equation with world leaders like Donald Trump, Vladimir Putin, Xi Jinping, Shinzo Abe and Emmanuel Macron. It cannot go unnoticed that at every international gathering in his time, India has emerged stronger as an advocate of cooperation for the common good.

The G20 Summit in Japan saw India handling fairly successfully the US-Japan combine on one hand and the Russian and Chinese leadership on the other. With US and Japan, the Modi regime has struck a remarkably high level of convergence of thought in economic and security affairs. It is on the global threat of terrorism that the Indo-US relationship, rooted in a total identity of outlook, has enabled India to push Pakistan to near isolation in the world community — as a breeding ground of militants. President Donald Trump, with his visceral aversion to violence of Islamic extremists, has called out Pakistan for providing a safe haven to terrorists and unlike his predecessors, not drawn a line between radicals who attacked the US-led West and the militant outfits like Lashkar-e-Taiba, Jaish-e-Mohammad and Hizbul Mujahideen that targeted India alone at the behest of the Pak army-ISI combine.

With US emerging as the biggest supplier of defence equipment to India and the Modi-Trump consonance on promotion of trade between the two countries helping to create an atmospherics of accommodation, there is every likelihood of issues like S-400 Triumf missile deal with Russia and tariff imbalance being resolved in time and even the conundrum of American sanctions on Iran softening up to India’s advantage. The US spokesperson specifically mentioned that 5G roll out had figured in the bilateral meeting between Modi and Donald Trump — this is a major business opportunity that India offers at present.

As regards Japan, Modi’s personal rapport with Abe is strong and technology-based industrial cooperation between India and Japan is gathering momentum. India’s stand on sharing of Indian data with Japan is going to be incumbent on the evolution of India’s policy on the subject — taking into account the fact of ‘data being the new oil’, as Mukesh Ambani put it at a conference last year, and weighing in the mutuality of economic and security interests of both sides. India’s collaboration with US and Japan for preserving our long range interests in Indo-Pacific region against any aggressive pursuits of China there, is a new fulcrum of Indo-Japan strategic partnership. India has appropriately emphasised the need for ‘a rules-based order’ in the Indo- Pacific region. A new nomenclature — Indo-Pacific — given by US to the maritime segment earlier called ‘Asia Pacific’ had certainly strengthened India’s position in this part of the world.

It is not surprising that the first group meeting held on the sidelines of the G20 Summit was of the President of US with the prime ministers of Japan and India, at Osaka. It demonstrated the resurgence of this triangular relationship which focused on both Indo-Pacific region and the global economy. In a smart diplomatic move, Modi emphasised on the acronym JAI for the group to give it a special identity. He talked of the importance of connectivity, infrastructure and peace, reiterated his own governance motto of ‘sabka saath, sabka vishwas’ and showered fulsome praise on Trump and Abe for carrying the mission of the new troika forward. The meeting gave a message loud and clear that nothing would come in the way of the three countries completely working together for development and global security.

What is even more significant for India is the astute handling of our relations with China and Russia by Prime Minister Modi both at the policy and personal levels in his time. BRICS and SCO have been brilliantly utilised by Modi for giving a distinct flavour to the relationship of India with Russia and China as something that could stand on its own outside of the powerful bonding this country has with US and Japan at present. Mutuality of gains of economic cooperation is being broached with China regardless of the obvious concerns India has over the CPEC and the military alliance that China and Pakistan have had for some time now.

India under Modi has thus built a sound framework of policy in dealing with all other major powers of the world and managed to earn a position of recognition and respect in the area of decision making at the global level on matters affecting the world economy and international peace. At G20, Modi warned the world once again that terrorism was the biggest global security challenge. On the threat of faith-based terror instigated by Pakistan, India does not have the comfort of distance that the US and other major powers had and this must be fully realised by the policy makers here.

Kashmir is the keystone of our security policy for the near future — Pakistan is converting it into a Muslim issue and seeking to invoke Jehad to lay claim on the Valley. Home Minister Amit Shah has struck a note of reality in showing the pro-Pak separatists their place, pulling up the Jammu and Kashmir administration for its failures and reiterating the importance of relentless pursuit of the terrorists. Prime Minister Modi has set the world stage right for India and there is little doubt that the new Home Minister would take charge of the Internal Security scene — getting the states to have their share of responsibility in neutralising the enemy agents on our own soil and not mixing domestic politics with national security issues.