Ceaseless turbulence not good for HK 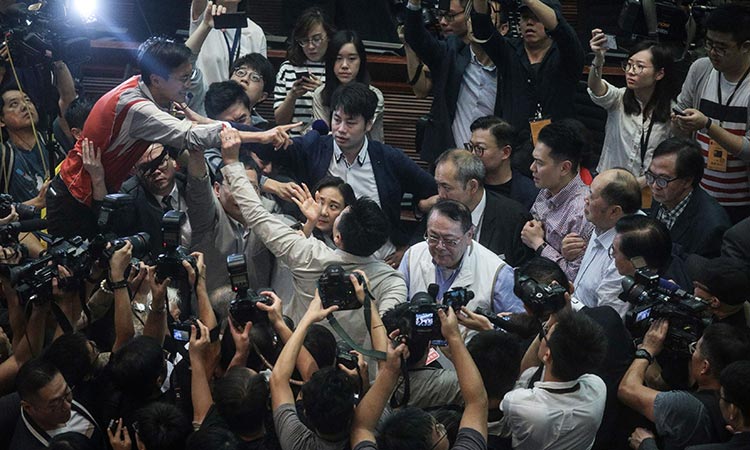 Protesters are demanding that a controversial extradition bill be scrapped entirely. AFP

A month of marches as well as violent confrontations with police involving some hardcore protesters have left Hong Kong in a deep mess.

With resentment persisting among people who are demanding that a controversial extradition bill be scrapped entirely, an independent inquiry into police tactics, amnesty for those arrested, and for the city’s unelected leader Carrie Lam to step down, the territory has been witnessing the worst political crisis in decades.

What is hugely disappointing is that an immediate solution looks unlikely.

The situation, in fact, has taken a turn for the worse as anti-government protesters have begun circulating plans “stress test” the Bank of China in their bid to keep pressure on the city’s pro-Beijing leaders, after five people were arrested in the latest clashes with police.

Opposition to the extradition bill has united a wide cross-section of Hong Kong, right from influential legal and business bodies to religious leaders.

The rallies were sparked by the now-suspended law that would have allowed extraditions to mainland China, but have since morphed into a wider movement calling for democratic reforms.

Sadly, Sunday night saw fresh political violence break out in the district of Mongkok as police baton-charged small groups of masked, largely young protesters who were walking along roads and refused to disperse following another massive, peaceful rally earlier in the day.

While police claim that the group was taking part in an “unlawful assembly,” activists have hit out at the police tactics, saying the protesters had remained peaceful as they made their way home, and that violence was started by a shield wall of riot officers that had blocked the crowd’s path.

Highlighting the growing tension, by Monday morning, online groups were already planning more protests on encrypted messenger apps and chat forums that have been successfully used by demonstrators to bring out huge crowds.

The situation is dicey. The police have not released a breakdown of how many people have been detained in the last month of protests. A tally kept shows at least 72 people have been arrested, though it is not clear how many have been charged.

Under Hong Kong’s mini-constitution China’s national laws do not apply to the city apart from limited areas, like defence.

The disappearance into mainland custody of dissident booksellers, the disqualification of prominent politicians, the de facto expulsion of a foreign journalist and the jailing of democracy protest leaders are among several issues that have sparked anxiety.

The ground reality is that the people have not accepted Hong Kong Chief Executive Carrie Lam’s argument that the extradition law was necessary to prevent criminals hiding in Hong Kong and that human rights would be protected by the city’s courts which would decide on any extradition on a case-by-case basis.

The dramatic suspension of the bill was one of the most significant political retreats by the Hong Kong government since Britain returned the territory to China in 1997.

While Lam herself has admitted shortcomings over the bill and said she had heard the people “loud and clear”, she has rejected repeated calls to step down.

In another development, Hong Kong pop singer Denise Ho has taken a message of defiance against China to the UN’s top human rights body, denouncing “deceitful promises” by authorities and prompting a Chinese diplomat to interrupt her twice.

A peaceful solution of the pending issues through sincere dialogue is the only best way forward. Hong Kong cannot afford to witness continued unrest.