Working with the enemy? Biden was just doing his job - GulfToday

Working with the enemy? Biden was just doing his job 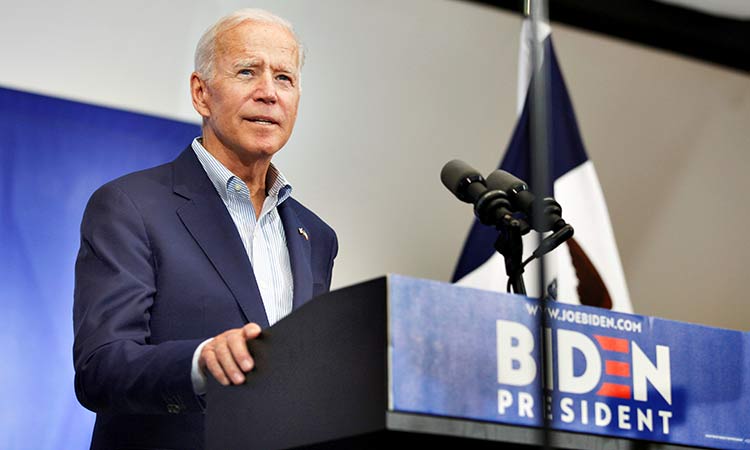 Joe Biden speaks at an event at the Mississippi Valley Fairgrounds in Davenport, Iowa. File/ Reuters

There’s a name for working with someone you can’t stand. It’s called “legislating.”

It used to happen all the time in Washington, and it still does, occasionally. But former Vice President Joe Biden became engulfed by progressive rage when he pointed to the late Sens. James Eastland and Herman Talmadge, two avowed segregationists, to describe the civility that Biden said he used to see on Capitol Hill.

Biden stipulated that Talmadge was “one of the meanest guys I ever knew” and that he and Eastland “didn’t agree on much of anything,” but they still passed bills together. “He never called me ‘boy,’ he always called me ‘son,’” Biden added of Eastman.

Sen. Cory Booker, one of just three African Americans in the Senate, took significant and understandable offense at Biden’s har-har retelling of the old yarn with the word “boy,” which was only the least awful term of derision black men were subjected to in that era. But along with calling Biden out on his language, Booker also sent a fundraising pitch hammering Biden for the work itself.

“I know the people that Vice President Biden worked with would not have wanted me in the Senate,” he wrote. “And I know that anyone running to be president of the United States and the leader of our party shouldn’t need this lesson.”

Biden had raised Eastland and Talmadge specifically because they were so far from his moral compass, but the anger flew at Biden from Booker and others for mentioning the segregationists, let alone working with them decades ago. He defensively stood his ground and refused to apologize to Booker, but he would have helped himself and progressives at the same time if he had explained that Eastman was both the chairman of the Judiciary Committee and the president pro tempore of the Senate, making his a crucial voice on which committees Democrats served on, as well as which legislation would move through Judiciary.

Biden didn’t say it, but he could have explained that shared goals often present themselves in Washington, even without shared values, and that working with people you disagree with can as often be a sign of strength as a marker of moral weakness.

In an interview with “The Washington Post,” HouseMajority Whip Jim Clyburn called the anger at Biden for working with Eastland “one of the most ridiculous things I’ve ever heard in my life.”

“Where would I be today if, when I got elected to Congress back in 1992, I had refused to work with J. Strom Thurmond, an avowed segregationist?” he asked. Clyburn pointed to Thurmond’s support for the MLK national holiday and legislation that helped Clyburn’s district as examples of the results he got working with the South Carolina Republican.

When Thurmond died, Clyburn, along with Biden, eulogized him at his family’s request. Maybe they had enlightened him. Maybe Thurmond learned in his old age. Either way, the work they did together made a difference that still matters to Clyburn.

Fast-forward to more recent times, and there are still examples of people who could never agree on some of the most fundamental principles they held, but still worked together to pass meaningful legislation.

Sen. Barbara Boxer, a California Democrat, was one of the earliest and most progressive environmentalists ever to serve in the Senate. Sen. Jim Inhofe, an Oklahoma Republican, famously called climate change “the biggest hoax ever perpetrated on the American people” and once pulled a snowball out of a baggie to prove it. (See? No global warming!)

But together Boxer and Inhofe were among the most prolific leaders the Environment and Public Works Committee ever saw. “We really like each other,” Boxer once said of Inhofe. “What’s important is we know how strongly we feel when we oppose each other, but we never surprise each other by going around someone’s back and sneaking something into a bill. We would never do that.”

In response, Inhofe said, “I’ve told her many times she has every right to be wrong, but you know, on the things that are really important, we did manage to get things together.”

Another pairing that surprised people was Bernie Sanders and John McCain, who worked extensively together to reform the veterans’ administration as leaders of the Veterans’ Affairs Committee.

Sanders is no less a democratic socialist for having brokered a deal with McCain, who not only supported the Iraq War but led the call for a troop surge to double down on U.S. involvement there.

“I will tell you this: John McCain’s political views are very different than mine,” Sanders told The Arizona Republic last year. “But John McCain, I consider to be a friend.”

More recently, Rep. Alexandria Ocasio-Cortez shocked her supporters this month when she agreed to work with Sen. Ted Cruz on a bill to ban former members from lobbying.

“We have an ongoing working relationship, and I’m extraordinarily excited in seeing what we can accomplish,” Ocasio-Cortez told ABC News. “I never thought I’d say it.”

But by the 2020 Democratic primary standard, AOC is working with a man who tried to take guaranteed health care away from people with pre-existing conditions, even though she wants to pass “Medicare for All.”

When Biden was waxing on about the old Senate days, he lamented that things are different now. “Today you look at the other side and you’re the enemy. Not the opposition, the enemy. We don’t talk to each other anymore.”

Biden was talking about the breakdown between Republicans and Democrats, but he may as well have been talking about the Democratic Party itself, which is headed in a dangerous and discouraging direction when a history of cooperating is so quickly attacked as a commitment to complicity.

Legislating can be an extremely unpleasant business. There’s a reason it’s compared to making sausage and worse. But occasionally working across divisions to achieve a goal can make the country and the world a better place. It’s something we need more of, not less.