Mexico’s other border is rattled by armed crackdown - GulfToday

Mexico’s other border is rattled by armed crackdown 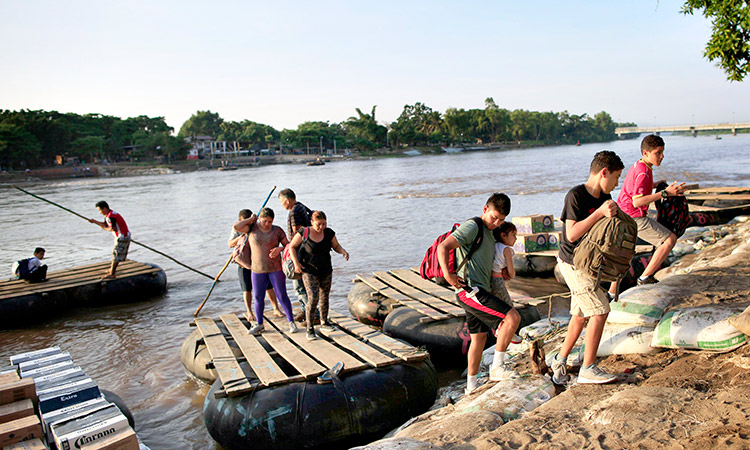 A group of migrants arriving from Guatemala disembarks from a raft in Ciudad Hidalgo, Mexico. File/AP

The rafts, made of plywood planks lashed to fat inner tubes, float back and forth all day, piloted by camareros who push poles deep into the riverbed to guide their vessels in a rough echo of Venetian gondoliers.

The cargo depends on the direction. From Mexico to Guatemala, it’s usually cans of cooking oil or bags of rice, cases of Corona and cartons of eggs. It’s mostly people going the other way, many headed for the US. All of it, technically speaking, is illegal, but the customs and immigration officials on the international bridge never paid much mind, allowing the Suchiate River crossings to build into the cornerstone of a thriving economy in an impoverished region.

The possible end to it all reared up earlier this month, with the arrival of a few of the thousands of troops Mexican President Andres Manuel Lopez Obrador is sending to the border.

“The soldiers came with their M-16s and told us that they didn’t want us to work,” said a 31-year-old who goes by the nickname Rooster. He has been making a living with his raft for more than a decade. Like the hundreds of other camareros (Spanish for tubers, though the word can also mean waiters or stewards), Rooster can earn as much as $39 a day, decent money in Ciudad Hidalgo, a town of about 15,000 that spreads out from the river.

The new show of force on the border is meant to stem the stream of migrants escaping violence and poverty in Central America, a move made to appease President Donald Trump after he threatened to impose tariffs on Mexican imports to punish the country for failing to control the masses trying to make their way to the US.

But the ripple effects could be devastating in the state of Chiapas, the poorest in Mexico, and in the administrative district of San Marcos in southwestern Guatemala, where almost two-thirds of people live in poverty. A network of suppliers and couriers pedaling tricked-out tricycles on the Mexican side keeps the camareros stocked with products that are either unavailable or prohibitively expensive in Guatemala — Ace detergent, Nivea skin cream, Nescafe instant coffee, mayonnaise, PediaSure nutrition drinks, toilet paper, McCormick spices and on and on. Rafts have been known to ferry washing machines across.

While the river trade has existed for generations, it exploded over the past five years as the Mexican peso lost one third of its value against the Guatemalan Quetzal. There are no official statistics on the value of the commerce, but according to locals it’s the biggest, and almost only, business around.

“This industry maintains the tricycles, the raft operators, the taxis, buses, everyone lives off of this. What happens if it’s gone?” said Bertha Alicia Fuentes, 71, who has been running a supply store in Ciudad Hidalgo for four decades, selling mostly yogurt and milk for river-export to Guatemala. “Forget it. Everyone would be poor.” She shook her head and lifted her hands in exasperation. “The merchandise needs to continue to flow.”

AMLO has acknowledged that there are 68 points on Mexico’s 700-mile frontier with Guatemala and Belize that aren’t well policed and has promised to secure them. Maximiliano Reyes, undersecretary of foreign relations for Latin America and the Caribbean, said on a recent trip to the area that the Suchiate rafts “are one of the primary points of irregular immigration” and that they are “something we’ll need to be looking at.” Francisco Garduno, the new head of the national migration agency, went further and said the raft traffic would be stopped.

Rooster, who declined to give his name for fear of reprisal, said he understands what the president and troops are up against. “The soldiers are workers, just like us, and they need to do their duty,” he said, leaning against a crate of alcohol in the shade of a tarp. And “AMLO did what he had to do,” under pressure from Trump.

What the policy makers in Mexico City might not comprehend, though, is what a diligently patrolled border with Guatemala would really mean, Rooster said. “This town and Tapachula would be bankrupt. The majority of the people who buy here are Guatemalans.”

Stores in nearby Tapachula, a city of more than 300,000 that’s the largest near the southern border, could be hurt. They include Walmart, Sam’s Club and Chedraui, all popular with Guatemalans who can afford to raft over — the 5-minute trip usually costs about $2 — to stock up.

Mexico’s frontier with Guatemala has been porous or even undefined for centuries, and Rooster is a typical free-flowing resident of the region. He is Guatemalan but lives on the Mexican side. His parents took him to the US when he was 4 and he grew up in California, where his mother still lives. He said he joined a gang as a teenager, was arrested on drug-possession charges and deported when he was 20.

He switches seamlessly between English and Spanish. He is married to a Mexican and they have a 9-year-old son. His wife voted for AMLO; she religiously watches broadcasts of the president’s daily news conferences. They approve of his proposals to pay higher pensions to the elderly and give more scholarships to students. Like many expert observers, they don’t have confidence that his troops-to-the-border strategy will work.

Enrique Vidal Olascoaga, a lawyer at the Fray Matias Human Rights Center in Tapachula, said he sees just downsides. “The only thing that a militarization of the border is going to do is make the crossing of people more dangerous and expensive.”

Maynor Guillen, a skinny 19-year-old from Honduras who had just come over the river, said the lawyer is right: Guillen was making his second attempt to reach the US and has no intention of giving up. “I’ve read that they’re going to send more soldiers to keep us from crossing,” he said, standing outside the Tapachula office of the Mexican Commission for Refugee Aid. “But I’m not afraid.”

There’s concern in Guatemala too, even though the river trade hurts businesses there and the government collects no taxes on the contraband that’s floated over. If the rafts were grounded, “there would be consequences,” said Paulo de Leon, the economic director for Central American Business Intelligence, an analysis firm in Guatemala City. So many people depend on the Suchiate economy, he said, that there might be a “blood bath” if the river crossing was actually closed.

Rooster said he has hopes for a peaceful solution. “But if they’re forceful with us,” he said, “we will need to be forceful as well.”