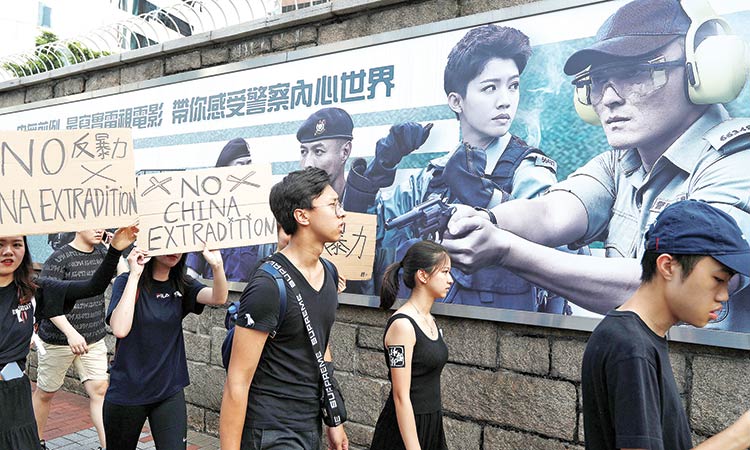 Ethan Chu was volunteering at an aid station near government headquarters here last week for what started out as a peaceful demonstration. Then, without warning, the 18-year-old high school student heard the pop and hiss of tear gas canisters and the shrieks of fellow protesters being pelted by rubber bullets.

“I was in complete shock,” said Chu. “People with injuries started coming to us for help. Then the police started throwing tear gas at us. It was hard to evacuate anyone. We couldn’t breathe.”

The June 12 crackdown by police in full riot gear only hardened the resolve of the demonstrators — who were protesting an unpopular extradition bill that they viewed as a threat to the territory’s democratic freedoms — and helped swing public opinion further in their favor.

The conduct of police that day was a serious blow to the reputation of a 30,000-member force that had long been dubbed “Asia’s finest” for its restraint and professionalism.

“The Hong Kong police in my days had a very well-deserved reputation of being politically neutral and exercising their powers with restraint,” said Anson Chan, the 79-year-old former chief secretary of Hong Kong, the government’s second-highest position. “I’m afraid over the years that image has been tarnished and continues to be tarnished.

“The scenes that we saw on the 12th of June just adds to people’s perception that you are no longer exercising restraint,” she said. Now the force’s reputation is sullied by accusations of excessive force, harassment and political influence by Chinese authorities. Video shared on social media shows half a dozen riot police kicking and beating a protester trying to recover a case of bottled water, baton-wielding officers pummeling another protester in front of journalists and another officer pumping pepper spray at point-blank range into the face of a demonstrator.

The pedestrian walkways near the protest site remain plastered with signs and pictures denouncing the police, who fired 150 rounds of tear gas, or about twice the amount used in the 2014 pro-democracy Umbrella Movement demonstrations.

Photographs of one man with a deep gash under his left eye and another with a bloodied face lying unconscious on the ground were typical of the images that circulated following the violence. Eighty people were reported injured in the melee, including 22 officers.

Despite being ranked one of the safest cities in the world, Hong Kong is experiencing some of the same frictions between police and the people they serve that plagues many communities in the United States.

The Hong Kong Journalists Association filed more than two dozen complaints against the police alleging violence and harassment, and Carrie Lam, Hong Kong’s embattled chief executive, is facing increasing demands for an investigation into police abuse. She said that is unnecessary, but as criticism grows, experts say the risk increases of police developing a siege mentality that becomes difficult to reverse. That could drive a wedge between police and the public, who increasingly view the department as a tool for implementing pro-Beijing policies.

“The media isn’t reporting about the protesters throwing bricks at us or trying to hit us with steel bars,” said a 28-year-old officer on patrol Wednesday who declined to share his name because he was not authorised to speak to reporters. “It’s unfair. We’re also human and we have to follow orders.”

A police spokesperson did not respond to a request from comment. A poll conducted by Hong Kong University a week before the clash showed satisfaction with the force at its lowest point in three years. The only support police can comfortably rely on is from politicians belonging to the pro-Beijing camp and the deeply unpopular chief executive. Disapproval of the department usually stems from its handling of political demonstrations — including the Umbrella Movement protests and the so-called “Fishball Revolution” of 2016, in which pro-independence groups fought a police crackdown on street food vendors in Hong Kong’s gritty Mong Kok district.

At one point during that clash, an officer took the rare step of firing warning shots in the air to keep angry mobs at bay. As China asserts greater control, Hong Kong police are increasingly accused of adopting the heavy-handed tactics of their authoritarian counterparts across the border in the mainland — and fears persist that the department’s apolitical stance will swing more favourably toward Beijing.

Last year, Hong Kong’s counter-terrorism task force was invited to tour Xinjiang, the far western Chinese region where more than a million Muslim ethnic Uighurs are estimated to be held in reeducation camps.

Hong Kong’s former police commissioner, Andy Tsang, was recently nominated by China to head the United Nations Office on Drugs and Crime — a move seen by some as a reward for his loyalty to Beijing.

“The mainlandization of Hong Kong police is inevitable,” said Willy Lam, a political analyst at the Chinese University of Hong Kong. “They will have no choice but to cooperate with mainland security people. You saw how they adopted their brutal style taking down students on June 12.” The main union representing the police said in a letter to its members that the real victims since that day are rank-and-file cops.

“Police officers have been under tremendous pressure since the riots on June 12,” wrote Lam Chi-wai, chairman of the Junior Police Officers’ Association. “Colleagues were mocked on the street, other departments were not willing to cooperate, restaurants refused to serve police officers, and colleagues and their families were bullied online. “The pressure has made us stronger and the impact has made us more united,” he continued. In the week since the violence, the department has shifted to a less confrontational approach. Police were barely visible during Sunday’s massive anti-extradition bill march involving an estimated 2 million people.

The softer policing may be tested as soon as Friday as activists have pledged to escalate their actions around the government headquarters if Chief Executive Lam does not retract the bill. The ordinance, which was suspended Saturday, would have allowed Hong Kong to send people to stand trial in China. For the department to win back trust, it needs to adopt techniques that made it one of the best police forces in the world in the 1980s, said Steve Tsang, a political scientist at SOAS University of London.

Back then, he said, deescalation was the ethos. A potential riot was approached using officers in soft hats offering water and a chance to talk. Helmets, shields and tear gas were stored out of sight in trucks. Hong Kong police under the British faced severe riots in the 1950s and 1960s as political instability in China spilled over. In the following decades, the colonial government realized it was in its best interest to be less confrontational, Tsang said.