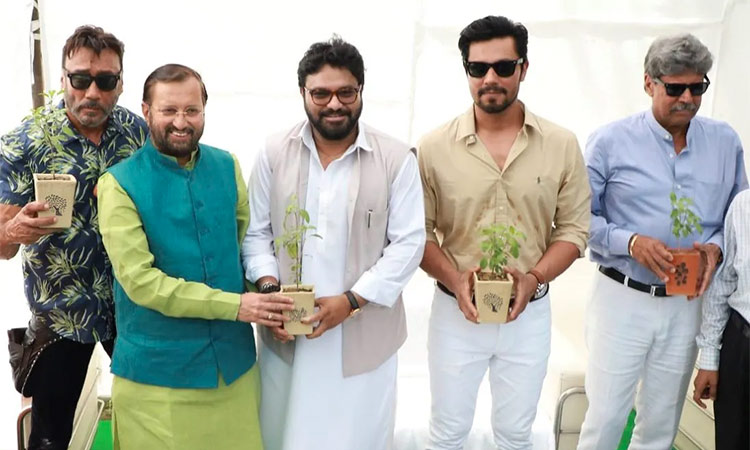 Politicians and celebrities come together for clearn environment.

On June 5, World Environment Day, leaders across India made pledges for a greener environment. President Ram Nath Kovind reaffirmed the commitment to a cleaner and sustainable planet on his Twitter handle. “On World Environment Day, we reaffirm our commitment to a cleaner and sustainable planet. Living in harmony with nature is a part of the Indian ethos. India is committed to addressing climate change and bequeathing a greener, eco-friendly habitat to our children.

“We are born and brought up in such an environment where nature is treated as God. We must think of ways of making the planet more clean and green. The rainy season is coming, therefore, I urge you all not to only plant a sapling but also make arrangements for its care so that it can grow in the coming years. We all must connect ourselves with the environment,” PM Modi said in a video posted on Twitter…Our Planet and Environment is something we all cherish greatly. Today on #WorldEnvironmentDay, we reiterate our commitment to ensure a cleaner planet.”

However, five satellite images released by India Today that show the extent of damage that climate change has caused were also creating a buzz.

From surprise snowfall in Sahara Desert to drying up of Lake Aculeo in Central Chile, from soaring temperatures in India to melting ice in Arctic, climate change has not left any part of the Earth unaffected.

In India, temperatures have soared across North India this summer, with mercury in parts of Rajasthan having already crossed the 50-degree mark. In South and Central India a drought stares at people as water tables deplete rapidly.

In the past few decades, many of the Himalayan rivers and lakes have dried up. The UN Climate Change says Earth’s average temperature has already risen by more than 1 degree Celsius due to climate change over the past century.

The rising mercury and decline in pre-monsoon showers have dried up large parts of the country. The recent data revealed by Drought Early Warning System (DEWS) this year shows that more than 42% of the country is ‘abnormally dry’. The area of arid land has increased by 6% from last year’s 36.74%. Telangana, Andhra Pradesh, Karnataka, Maharashtra, Gujarat and Rajasthan are among the worst-hit. Excessive use of groundwater coupled with poor water management systems and insufficient rainfall since the past few years have put millions at risk of severe water scarcity.

According to data published by The Times of India (TOI), in the last 65 years, pre-monsoon showers had fallen below the three-digit mark only in 2012 (the driest at 90.5mm) and 2009 (99mm). The Customized Rainfall Information System (CRIS), shows that all the regions across India have witnessed below-normal rainfall from March to May.

A 2018 Niti Aayog report points out that many places across India are set to witness ‘Day Zero’ by 2020. Around 21 major cities including Delhi, Bengaluru, and Hyderabad are at risk. The report further warns of the impact on the country’s GDP in future.

The country is witnessing the second driest pre-monsoon ever since 1954. The pre-monsoon showers that are largely responsible for dragging temperatures lower and refilling water tables have failed to reach the anticipated mark. As a result, temperatures are at a record high and many regions are facing acute water shortage. According to the Indian Meteorological Department (IMD), India received 99mm of pre-monsoon showers this year, one of the worst-performing records since 2012 (90.5 mm).

The Centre for Science and Environment (CSE) has launched the latest edition of the ‘State of India’s Environment (SoE) 2019 in Figures’ on June 5 too.

This report is an exclusive data-driven analysis of major developmental and environmental sectors. The datasets can be used by the media to investigate compelling stories, ask better questions to policymakers to drive them to come up with better policies for sustainable development agenda.

The picture the report paints is alarming to say the least!