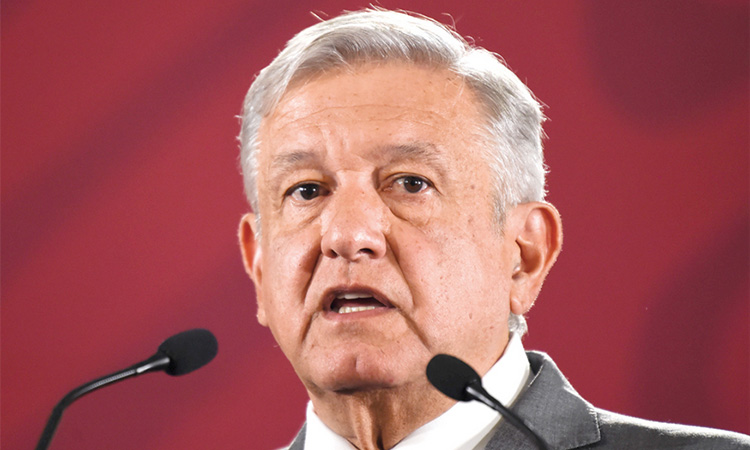 In Mexico, a leftist president has steadfastly vowed to respect the “human rights” of Central American migrants and offered them visas and working permits. In the United States, a conservative president has repeatedly called the migrant influx an “invasion” and threatened to close off the border with Mexico to stop it.

Two leaders. Two widely divergent world views. Their seemingly inevitable clash has now morphed into a full-fledged crisis about whether President Donald Trump will make good on his vow to slap escalating punitive tariffs on all Mexican imports starting next week to press the country to do more to halt immigration.

Mexico is also counting on pressure from US business allies in the automotive, agricultural and other sectors heavily dependent on Mexican trade to persuade Trump to reverse course on tariffs, which are slated to start at 5% on June 10 and gradually rise to 25% by Oct. 1.

But, in London on Tuesday, Trump showed no sign of backing down. “I think it’s more likely that the tariffs go on, and we’ll probably be talking during the time that the tariffs are on,” Trump told reporters at a news conference. “And they’re going to be paid.”

Moreover, few experts believe that Mexico can effectively seal its notoriously porous, 600-mile border with Guatemala, the entry point for Central Americans and a hub for smugglers moving migrants and contraband.

“You have to recruit an enormous amount of people to man choke points and checkpoints,” said Jorge Castaneda, a former Mexican foreign secretary. “And if you send troops, you leave a whole lot of other places unprotected.”

Neither Trump nor Lopez Obrador was slated to be in Washington on Wednesday for what Mexico has grandiosely labeled a “summit” — but is really a desperate attempt to avert what could be a catastrophe for Latin America’s second largest economy, already experiencing stagnant growth this year. Mexico is heavily dependent on cross-border commerce and is no position for a trade war with its giant northern neighbour.

The two leaders’ singular views and backgrounds have helped shape the impasse.

“You obviously have structural challenges regarding what is happening in Central America and causing trans-migration through Mexico, as well as Mexico’s own capabilities in enhancing control over its southern border,” said Arturo Sarukhan, a former Mexican ambassador to Washington. “But (there is) also the challenge of two leaders who understand personal and political and diplomatic interactions in very different ways.”

Scathingly dismissive of his critics, whom he regularly derides as “snobs” and “hypocrites,” Lopez Obrador has remained conciliatory — critics say appeasing, even obsequious — toward Trump. His stance of “paz y amor” (“peace and love”) dramatises a reality: US hostility can hurt Mexico.

“We will not be baited into a confrontation,” Lopez Obrador said Monday, though officials here are in fact considering retaliatory tariffs and appeals before international trade panels should the levies be imposed.

Although the two presidents have exchanged telephone calls, they have never met in person — an odd state of affairs between two nations that share an almost 2,000-mile border, along with deep historic, economic, social, cultural and law enforcement ties.

Aside from a common fondness for baseball, the two leaders appear to have little in common.

Silver-haired and often rumpled, Lopez Obrador, 65, the son of provincial shopkeepers, is a lifelong politician and avid historian who embraces personal austerity, opting to travel on commercial airlines. He was elected in July in a landslide victory on his third try for the presidency and enjoys approval ratings of 70% or more.

Trump, 72, with his orange-tinted mane, is a bombastic former reality-show star and scion of a New York real estate empire. In a deeply divided country, he faces what could be a grueling reelection battle.

Still, the two men share many traits that may have contributed to the current deadlock. Both are populists — Trump of the right, Lopez Obrador of the left — who appeal to domestic constituencies that have ardent views on certain issues, including immigration.

In Trump’s case, immigration has long been his touchstone issue and fodder for his base. He has repeatedly disparaged Mexico, vowing to build a border wall and infamously kicking off his long-shot presidential campaign by accusing Mexico of sending drugs, criminals and “rapists” to the United States — adding: “And some, I assume, are good people.”

For Lopez Obrador, the human rights of migrants have long been paramount — not surprising perhaps for a politician whose country was for decades the principal source of immigrants to the United States. His administration has issued humanitarian visas to thousands of Central Americans in the credulous view that many would remain and work in Mexico.

“The idea of all Hondurans is to arrive in El Norte and not to stay in Mexico,” said Carlos Onan Galo Perez, 35, a US-bound Honduran who was interviewed recently in southern Chiapas state as he, his wife and three children waited for a freight train to take them north. “If this whole trip was all about staying in Mexico, we’d be better off remaining in Honduras.”

In April, under pressure from Trump, Mexico bolstered immigration checkpoints in the south, increased deportations and arrested hundreds of migrants to break up the most recent northbound caravan.

But Lopez Obrador has never acknowledged the crackdown and never mentions the word deportation.

“How do you transform the country of fraternity for the world’s migrants into a ghetto, a closed space, where migrants are stigmatized, mistreated, persecuted, expelled?” Lopez Obrador wrote in a rambling riposte last week to Trump’s call for tariffs, invoking Abraham Lincoln and Franklin D. Roosevelt, among other historical figures. “The Statue of Liberty is not an empty symbol.”

The emotionally charged letter was widely lauded in Mexico. Trump was unmoved. “We want action, not talk,” Trump wrote Sunday on Twitter.

“President Trump has learned that he gains political capital by bashing Mexico,” Carlos Heredia of the Center for Research and Teaching in Economics in Mexico City told a panel Tuesday at the Wilson Center in Washington. “It has worked for him in the past and it will work for him in the future.”