Japan: A barbaric and condemnable attack 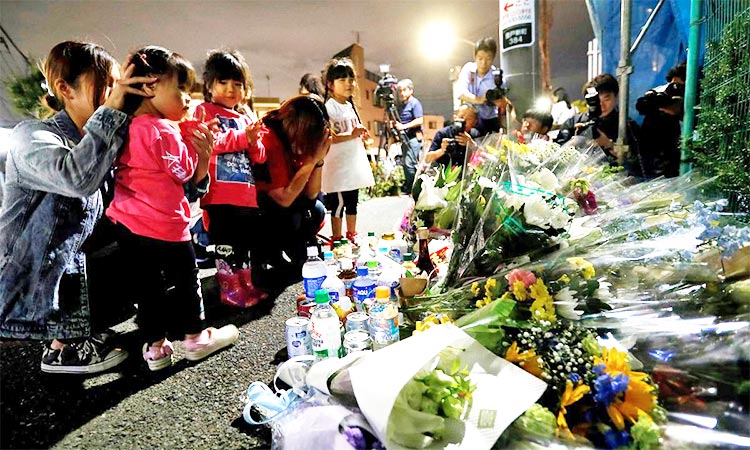 Children place flowers on the entrance of the school in Japan. Reuters

The attack on schoolgirls in Japan is downright heinous, appalling and jangles the nerves of any civilised individual. Two people, including a schoolgirl, were stabbed to death and more than a dozen injured in Japan on Tuesday in a rampage that targeted the children as they waited for a bus.

The 51-year-old attacker crept silently up behind the kids at the bus stop and slashed randomly at them before fatally stabbing himself in the neck.

The children were victimised by the savage attack for no fault of theirs. When they left home for school, little did they realise the ghastly, devastating and gory fate that was awaiting them.

Police said an 11-year-old schoolgirl and a 39-year-old parent died in the attack.

Most of the victims were students at a Catholic elementary school who would line up for the bus at the same site every day.

It is a sad thing that this should happen in Japan, where people are considered to be cultured and peaceful.

It was an utter nightmare, a scene we are more likely to see in Hollywood movies: children and adults falling to the ground, with blood-spattered clothes, dozens of kids running helter-skelter screaming for help, and school bags and books scattered on the ground.

“The colour of their white shirts turned red after they collapsed, then I understood they got stabbed,” said one witness.

The scene of the attack was still swarming with emergency personnel hours later, with three police vans parked around the spot to block it from view.

Emergency workers set up an orange medical tent to treat the wounded, and ambulances and fire engines were parked nearby.

In a nearby parking lot, a frightened-looking boy was in shock with scratches on his face, hands and legs, apparently from falling to the ground as he ran for his life.

The bloodshed came as Donald Trump ended a state visit to Japan, and the US president offered his “prayers and sympathy” to the victims as he met troops outside Tokyo.

Violent crime is extremely rare in Japan, and children often travel to and from school alone.

According to one report, crime rates have been going south in the country for over a decade.

The country has famously strict gun control regulations and gun crime is unusual, but there have been a few high-profile stabbing attacks.

In 2018, a man was arrested in central Japan after stabbing one person to death and injuring two others aboard a bullet train, an attack that prompted new security measures on the rail service.

In 2016 a former employee at a home for the differently-abled allegedly killed 19 people and injured more than 20 others.

Also in 2016, a man stabbed four people at a library in northeastern Japan, allegedly for mishandling his questions. No one was killed.

In 2008, seven people were killed by a man who slammed a truck into a crowd of people in central Tokyo’s Akihabara electronics district and then stabbed passersby.

The incident raises questions about how schools can ensure the safety of children while commuting.

That the Monday morning attacker should violently slash at innocent schoolchildren is unthinkable. He deserves the toughest penalty ever for his crime because children by definition are innocent.