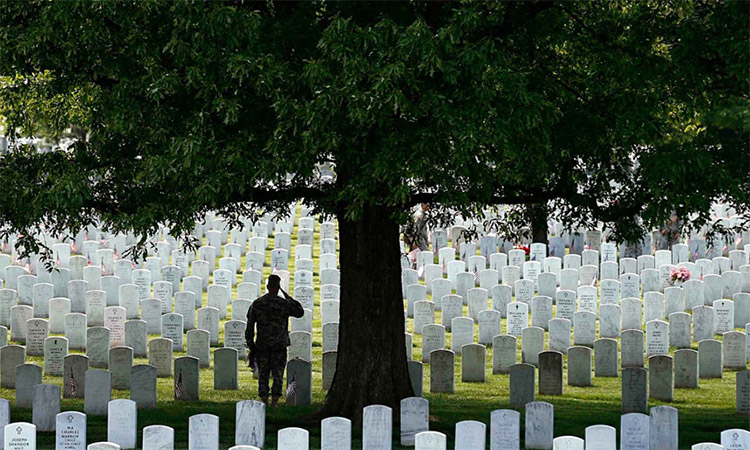 A soldier pays homage at the Arlington National Cemetery. Reuters

If you’ve lost someone to war or conflict, every day is a kind of Memorial Day.

For the rest of us, once a year we are called upon to actively honour the sacrifice of our uniformed men and women who’ve died in service to our nation.

People have a “tendency ... to forget the purpose of Memorial Day and make it a day for games, races and revelry, instead of a day of memory and tears.”’

No, this is not a recent tweet or a pithy social media caption. It was uttered by a veteran in 1913, who felt the meaningfulness of Memorial Day was slipping through the American conscience.

While the nuances of Memorial Day are debated in the historical community, the most important takeaway is that its origins are in the Civil War.

This is of particular note because every American lost someone in that bloody conflict. An estimated 752,000 were killed — 2.4% of the population in 1860. Comparatively, if 2.4% were killed in our wars with Iraq and Afghanistan right now, those killed in action would total 7.8 million.

That is nearly the equivalent of the combined population of Los Angeles, Chicago and Dallas or the entirety of Washington state. From a different angle, that’s more Americans than died in World War I, World War II, Korea, Vietnam Afghanistan and Iraq combined.

So when Memorial Day, or Decoration Day in its infancy, was established, every single American was memorializing or remembering someone killed at war. The burden was shared and the cost of war was well understood by the entire nation.

In a different way, the same might be said about nearly every conflict until 1973, when the draft was abolished. Arguably, the civilian-military divide has only grown wider since then, with less than 1% of our population serving in Iraq or Afghanistan.

Simply put, there are entire towns across America whose families have not sent a single son or daughter to our nation’s longest war.

To that point, in 2001, a Gallup poll established that only 28% of Americans knew the actual meaning and purpose of Memorial Day. A vast majority of the post-9/11 veteran population believes that the civilian public does not understand their or their families’ problems, a belief shared by the majority of the general population. Moreover, half of Americans say the recent wars have made little difference in their lives.

In an effort to combat this nonchalance and societal malaise, Congress established a National Moment of Remembrance to be observed every Memorial Day at 3 p.m. The time is intentional, predicated on the belief it is when most Americans are the busiest, bustling about and enjoying their day.

We need fewer moments of silence and more moments of talking about service and sacrifice to our younger generations. It is not in the multitude of silence that change occurs, it is in moments when thousands of men and women who’ve “borne the battle” raise their voices in memory of those who have gone before.

If we are to truly honor those who gave their last full of measure of devotion, we must be active, not passive, in our strides to impress those values upon the broad public.

We are most at risk when we forget where we come from, where we’ve been, and who was there. As the 75th anniversary of D-Day approaches, this Memorial Day feels particularly poignant. The last vestiges of the Greatest Generation are upon us, as the Korean and Vietnam War veterans enter their twilight.

Too soon, the burden of remembering will be passed along to those who did not experience such things first hand. The post-9/11 veteran generation must recognize its promise to uphold the honor and dignity of their sacrifice, while sharing our own.

We must volunteer again, this time to speak at a local elementary, middle, or high school_ our presence a tangible reminder that freedom is only one generation away from extinction.

Schools, universities and employers must open their doors and their minds. Not as a handout, but as an acknowledgment that every American is beholden to the future of our nation and the inculcation of her values.

Even in a time when our differences feel vast and insurmountable, we can and must rally around this cause.