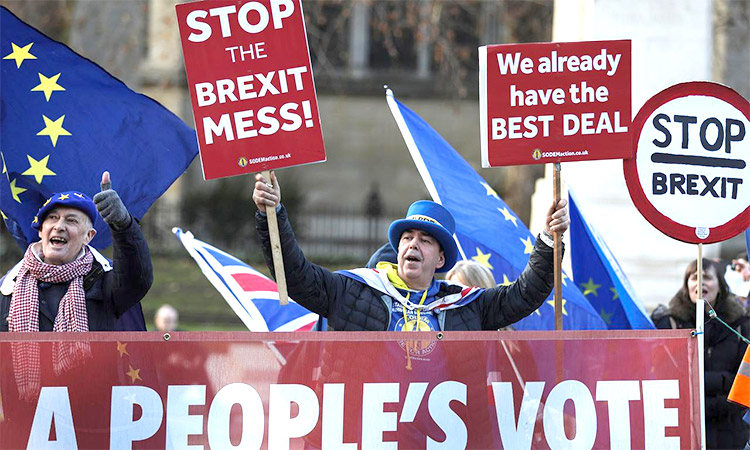 Britons continue to grapple with the Brexit puzzle.

Way back in 2012, during the first Avengers movie, Captain America is discussing his new uniform with Agent Phil Coulson. “Aren’t the stars and stripes a little old fashioned?” he asks.

Phil Coulson looks at him earnestly in reply. “With everything that’s happening, and the things that are about to come to light, people might just need a little old fashioned right now.” It was a continual theme throughout the Marvel movies, and a constant trove for writers to delve into across the popular culture – from Game of Thrones to Years and Years.

Channel 4’s Brexit: The Uncivil War, showed how the Leave campaign used this thinking to devastating effect in politics and the EU Referendum campaign. “Take Back Control” was their mantra, harking back to a simpler and more honest time.

There is a very simple problem with this philosophy, however. Whilst modern life – with social media, fake news, terrorism, the climate crisis and dearth of democracy – is certainly chaotic and confusing, it’s a world young people have inherited, not created.

In fact, you could make a compelling argument that “old fashioned values” are being undermined, by the old, not the young. Firstly, because bizarrely, much of our politics in an age apparently obsessed with being young is dominated by those who, well, aren’t.

In fact, many of our political leaders today specifically espouse a politics of nostalgia – back in the good ol’ days, when there were “boy jobs” and “girl jobs”, and we knew who we were and what we stood for. Donald Trump, the oldest American to ever become president at 70 years old, pledged to “Make America Great Again”.

Jeremy Corbyn, whose political knowledge seemed to have stopped circa 1977, is 69 years old, and talks of reopening coal mines. In fact, Theresa May (at the time of writing our prime minister, and 62 years old) is one of the youngest of the lot.

Admittedly, Nigel Farage – who says that his “greatest regret” is not being at D Day – missed out by a good 20 years, being only 55 years old. Farage in particular, makes a living out of painting a compelling picture of a bygone Britannia; green fields, cricket and fair play.

The rise of extremism on both the left and right of British politics shows that as well as politics being cyclical, it is indeed also circular. Both of these ideological viewpoints need to hark back to imaginary past eras of prosperity and peace, to support their wider world view. There is a reason both Farage’s Brexit Party (and far less known, Corbyn’s Labour Party) are propped up by the old.

There is however, hope. Because an easy response to a crisis in our democratic institutions – created for and by older generations – would be for young people to bunker down, ignore them and live a digital first world of our choosing.

Instead, legions of young people, of all politics and none, are actively engaging in wider society to change our collective futures. Voter registration, Brexit, Extinction Rebellion and racial injustice – we’re attempting to reshape a society in our image.

As we begin to reflect on a remarkable European elections campaign, it’s also worth looking at political grandees who have been brilliantly speaking out on behalf of young people.

I’ve seen both former deputy prime minister Lord Heseltine and former foreign secretary Dame Margaret Beckett speak in public, and they’re always most passionate about the impact Brexit will have on the young.

There is a genuine desire, across generations, to create a society in a modern age, which reflects some of those old fashioned values. New rules to curtail the influence of money in politics, electoral reform and a covenant for the internet.

There’s lots to do – in fact, I could do this all day – but it will only happen with all generations works together. We’re not there yet, but one day we might be.