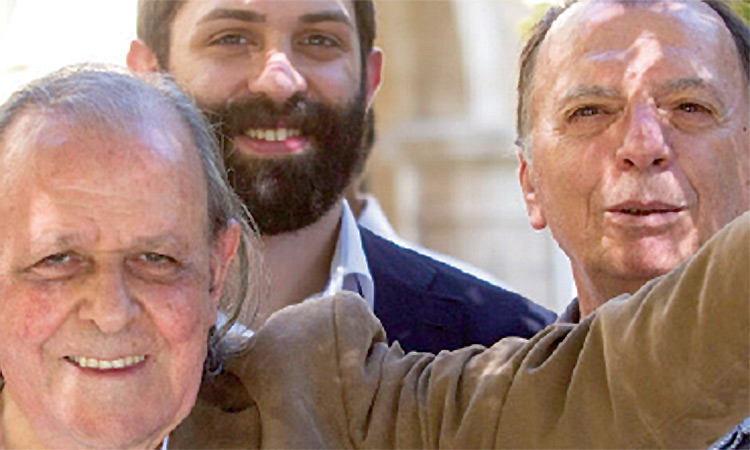 If convicted, Levent and Osman would have been jailed for up to five years. But Levent made the point that they are Turkish Cypriot citizens of the Cyprus Republic and of the European Union. If they had been mainland Turks living in Turkey they would have joined the 68 journalists and editors currently serving time in prisons. During 2018 Turkey was, for the third consecutive year, ranked by the Committee to Protect Journalists the globe’s top jailer of journalists, ahead of China (47) and Egypt (25). The Committee’s advocacy director, Courtney Radsch, stated, “Turkey has really cracked down on the independent press by equating journalism with terrorism. And we see this as part of a pattern that’s been in place for many years.”

In December 2017, Levent’s paper Afrika republished a cartoon circulated online in Greece depicting an ancient Greek statue urinating on Erdogan’s head. The caption read: as “seen through Greek eyes.” The cartoon was an angry Greek response to Erdogan’s arrogant behaviour during his first visit to Greece as Turkish president. He had been expected to adopt a conciliatory tone with the aim of easing strained relations between Ankara and Athens.

Instead, he called for redrawing the borders between Turkey and Greece, accused Athens of discriminating against ethnic Turkish citizens of Greece, and reconfirmed Turkey’s commanding role in northern Cyprus, occupied by Turkey in 1974 following a failed coup by the Athens junta against Cypriot President Makarios.

Levent and Osman were also acquitted of a second charge of “inciting hatred of a foreign leader with the aim of spoiling the friendly and peaceful relations between the two countries,” i.e., Turkey and the breakaway Turkish Cypriot entity recognised only by Ankara.

Relations are seriously strained for a number of reasons. Since 1974 the Turkish Cypriot population has shrunk to around 130,000 due to emigration while 185,000 Anatolian mainlanders have settled in the north and Ankara and Turkish businessmen play a large role in the politics and economy of the north. Levent stated, “We face the risk of settlers becoming locals and locals being left without a country.”

Erdogan’s increasing authoritarianism and crackdown on dissent has frightened Turkish Cypriots who also resent Erdogan’s attempt to change their secular culture by building mosques and religious schools which have the approval of the more conservative and devout settlers. The teachers’ union, in particular, has complained about the shortage of public schools and Ankara’s interference in education.

The Turkish Cypriot economy has depended on Turkey for budgetary support which has been reduced. All imports and exports are conducted through Turkey. Purchases of cars and equipment imported from Turkey must be paid for in hard currencies. Sellers of houses and flats and landlords also demand euro, sterling or dollar payments. Bank loans are in foreign currencies and must be paid in these currencies. Due to Turkey’s debt crisis, corruption and economic mismanagement, the Turkish lira has lost value over the past 18 months, making prices rise dramatically in northern Cyprus as well as on the mainland.

Following Turkey’s opening in 2003 of crossings between the two sides 120,000 Turkish Cypriots have secured citizenship in the republic and, as Levent said, the European Union. This has given them internationally accepted passports, the ability to travel freely, and the right to participate in the May 26th European parliamentary elections taking place in the republic. More than 80,000 Turkish Cypriots are registered to vote and several are standing for seats, including Levent, who stood as an independent in 2014, is running with five other independent-minded Turkish Cypriots who have formed a list called the “Jasmine movement.” Although Jasmine will make history by taking part, it is not likely to win a seat.

Another Turkish Cypriot, Niyazi Kizilyurek, a leftist academic who lives in the republic, is running on the list of the Greek Cypriot communist Akel party and could be the first Turkish Cypriot to become a MEP. Special voting centres are to be established for Turkish Cypriots but a source in the north told Gulf Today that due to immigration controls, he estimated only about 10,000 would be able to cross into the republic in order to vote.

Greek Cypriots are in two minds about Turkish Cypriot participation in this election. On one hand, they resent the division of the island which they blame on Turkey and have not reconciled with their countrymen in the north. On the other, they believe Akel — always a key political force in the republic — will benefit by garnering the Turkish Cypriot vote. Polls show that the ruling centre right Democratic Rally will win two seats, Akel two seats, the centrist Democratic Party and nationalists of the right-wing Popular Front or Edek one seat each. This does not amount to a major shift from the previous election.