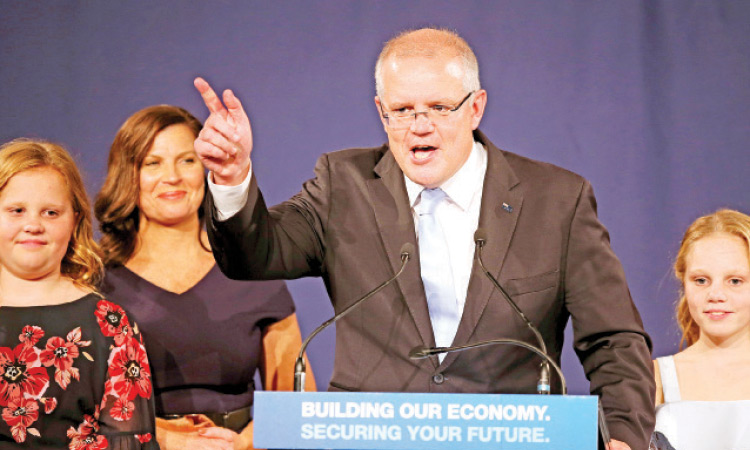 Scott Morrison speaks to party supporters flanked by his family in Sydney. AP

Donald Trump called his supporters the “silent majority” and the “forgotten man and woman” in the 2016 campaign. Hillary Clinton called them “deplorables.”

Talking heads and commentators, lacking any sense of reality or civility, use words like “racist,” “bigots,” “idiots,” “homophobes,” “misogynists” and the like to describe nearly half the country that voted for Trump.

But is this simply a case of sore losers suffering mightily from Trump derangement syndrome, still in denial at Clinton’s unexpected loss, or is there something bigger at work? Is the silent majority a US phenomenon, or are we seeing the first skirmishes of a working-and middle-class revolution against political elites developing here and abroad?

In Britain, anti-Brexit forces dubbed the working-and middle-class voters who favoured a British pullout as “leavers” or, more pejoratively, “Brextremists.” Many in political and media circles expected “reason” would prevail in the hotly contested Brexit vote and were sorely disappointed with the results.

Today, much like their Democratic counterparts here, the pro-EU forces are still hoping to somehow overturn the Brexit vote that shocked the European elite who simply couldn’t imagine that a majority of Brits would vote to opt out of the EU.

And now, in Australia, we have yet another example of the silent majority surprising the political experts who remain in shock over conservatives’ win in the Australian elections last week. Down Under, they call those voters the “quiet Australians,” with some Labour supporters taking a page out of Hillary Clinton’s playbook and calling conservative voters “dumb,” among other things, in the days after.

Once again, the political elite were gut-punched when media pundits, a part of the elite themselves, missed the growing unrest and waning patience of working-and middle-class voters with the Labour Party’s leftist agenda, heavy on climate change and light on economic opportunity.

These middle- and working-class voters are increasingly uncomfortable with what’s become a kind of pseudo-socialism, a moniker that could be easily applied to today’s Democratic presidential field and their far-left platforms.

He went on, “Labour learned that class warfare no longer appeals to the middle class, who aspire to become rich and who understand the perverse incentives of high taxes.”

Another Australian, academic Waleed Aly, gave Labour’s take on the Australian election in The New York Times. He lauded the Labour Party’s platform, characterizing their campaign agenda as one of “serious, bold policies” and blamed Labour’s loss on an electorate “averse to big change.”

By that, I assume, he means climate change and the fact that Queensland, home to Australia’s metallurgical and coal industry, voted against Labour in much higher numbers than expected — perhaps a perfect echo of Hillary Clinton’s loss in the coal-producing states of America’s Rust Belt.

But when a presidential candidate promises an Ohio town hall that she will “put a lot of coal miners and coal companies out of business,” as Clinton did, perhaps she shouldn’t expect to win coal country. The same, apparently, goes for Australia.

In fact, the Australian Labour Party’s liberal agenda and today’s Democratic Party policy positions, pushed by unhappy elites, are remarkably similar, focused on climate change and anti-business rhetoric, while conservatives in both the US and Australia have successfully pushed tax cuts in their recent national elections. The exception is 2018, when Republicans focused on immigration instead of tax cuts, jobs and wages to their own detriment.

But even Aly admitted that Labour ran a less than stellar campaign and offered voters a “narrative of ‹fairness’ that failed before the conservatives’ “story of ‹aspiration.’” It’s also a view of the world that separates the Republican and Democratic parties here and their agendas going into 2020.

There are some Democrats who understand the frustrations of working-and middle-class voters today and what that resentment of elites portends for both parties. Former Chicago Mayor Rahm Emanuel, writing in The Atlantic about the college admissions scandal and the public reaction to it, said it “illustrates what may be the most important, least understood and underappreciated political dynamic of our era.”

He went on to characterize it as “a middle-class revolt against the elites and the privileges they hoard” and “the most important barrier standing between Democrats and the White House.”

I couldn’t agree more. The US, Britain and Australia — perhaps Canada too — may be in the midst of a populist uprising. Populism usually arrives when governmental leaders are not addressing the agenda the country at large wants.

What all these voters, who upended the political status quo and defied expectations in recent elections, share is a strong and sincere belief that elites, and only elites, in their societies control their government and its agenda. And they believe these elites neither respect their views nor care about their problems.

Australia may be a world away, but as history has often shown us, revolutionary change doesn’t end at the water’s edge, especially in the age of social media. The election of Donald Trump and the Brexit victory should have been a warning flag for Labour that the restlessness of the working and middle classes shouldn’t be taken lightly.