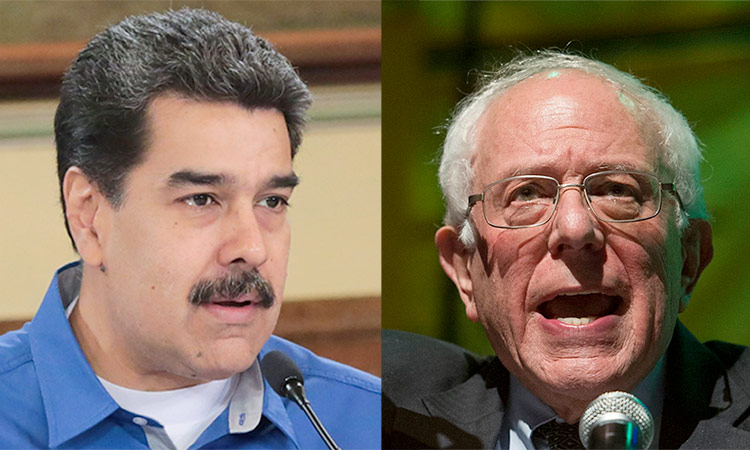 In one vivid example, Sanders is reported to have said, “You are worms” to George Crile, a prominent CBS journalist, while scolding American reporters for not reporting “the truth” about Nicaragua.

More recently, the usually ready-with-a-lecture senator has been deafeningly quiet when asked to fully condemn the disastrous and repressive Maduro regime in Venezuela. Somehow, it seems, he still can’t bring himself to quite side with the yanqui imperialists over a socialist dictator who starves and kills his people. As of February, 3.4 million people had fled the unlivable conditions in Venezuela, according to the UN.

Bernie shares more opinions with The Clash than with foreign policy experts. In one paragraph in the report, we find him claiming the American media won’t tell the sunny truth about the Sandinistas –apparently the media was inventing all of the reports of paramilitaries viciously pillaging the Nicaraguan people and assassinating political opponents. In another, we find him praising the Soviet system in its decrepit late-80s state. The Times also reports him writing a letter of apology for the bombings of Hiroshima and Nagasaki that helped bring an end to Emperor Hirohito’s rule. This may or may not be a moral position, but it is certainly not an anti-imperalist one.

Sanders also travelled to Cuba, where he spent time vaunting the Cuban healthcare model rather than noting the Castro regime’s brutal repression and imprisonment of dissidents. That same regime is still up to its old tricks under the rule of Fidel’s brother. According to Human Rights Watch, “the Orwellian laws that allowed their imprisonment – and the imprisonment of thousands before them – remain on the books, and the Cuban government continues to repress individuals and groups who criticize the government or call for basic human rights.”

Meanwhile, the actual American policies that have most benefited Latin Americans are those which favor borders that are porous to trade and immigration — things Bernie has long opposed. Should a presidential contender not care for basic human rights in practice, rather than in theory?“The American people, many of us, are intellectually lazy,” Bernie is quoted as having said in a 1985 interview. The quote comes from a Washington Post piece detailing what we know about his self-described “very strange honeymoon” in 1988 in the Soviet Union. How much of a political liability will stories like this, including links to him sitting shirtless with his Soviet hosts and drunkenly singing folk tunes, be?

Personally, I believe that Bernie’s foreign policy outlook as revealed by his decades-long record is a serious flaw. There is a tension in leftwing internationalism between the anti-imperialist and the anti-authoritarian tendency. Bernie has consistently refused to acknowledge this while refusing to properly challenge the authoritarian side of things. That is the mark of an ideologue with a dangerous outlook about the United States and its role in the world.

It’s fine to criticize American activity in Latin America and elsewhere. There is plenty to criticize, in Guatemala, in Chile, and in too many others. It’s not fine to hold American power itself definitionally in contempt while wielding it.