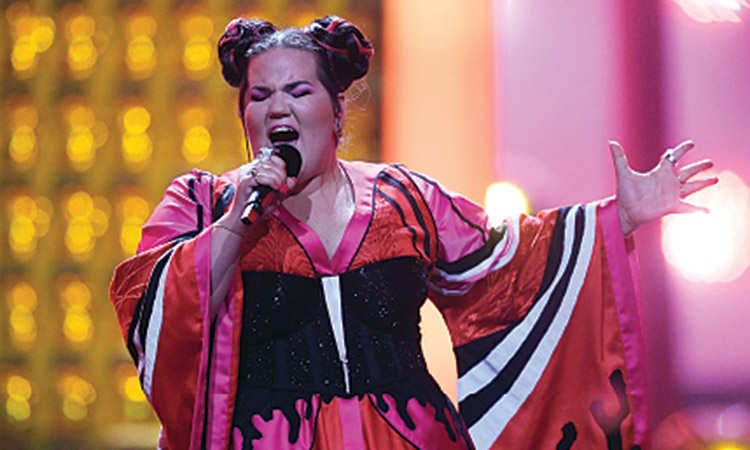 The 64th Eurovision song contest set to be held in Tel Aviv next week is a hotly contested occasion. It is taking place in the wake of an escalation of violence with Gaza and amid protests over Israel’s systematic persecution and suppression of Palestinians living under its hostile occupation.

Two days of violence between Gaza and Israel that killed 27 Palestinians and four Israelis followed last Friday’s weekly protest against Israel’s 71 year conquest of most of Palestine, expulsion of two-thirds of its indigenous inhabitants and 52 year occupation of the narrow coastal strip, the West Bank and East Jerusalem.

Although a ceasefire was imposed after two days, Hamas, which rules Gaza, declared random rocket attacks on Israel would resume until it eases its siege and blockade of the strip and permits Palestinians living there to recoup their desperate lives.

The latest escalation is certain to prompt international activists to increase pressure on Israel to end its clampdown on Gaza as well as on European governments to tackle Israel’s violations of international humanitarian law by imposing collective punishment on two million Gazans.

The violence ended only when Palestinians began to observe Ramadan and Israel prepared to mark its memorial and “independence” days and greet Eurovision contestants. Israel does not want Palestinian rockets to mar these occasions, demonstrating that Israelis do not enjoy security.

Hosting of the event was conferred on Israel after its entry Netta Barzilai won last year’s competition which was held in Lisbon. However, her victory was controversial. Barzilai, an ardent fan of Japan, was accused of “cultural appropriation” since her song and her attire were borrowed from that country’s traditional musical and dress styles. She argued that her choices reflected cultural diversity.

Naturally, Israeli Prime Minister Binyamin Netanyahu exploited her victory by vowing that the contest would be held “next year in Jerusalem.” His statement was made on the day Israel celebrated the anniversary of the imposition of its illegal rule on the Holy city in 1967 and the day before Donald Trump shifted the US embassy from Tel Aviv to Jerusalem. The US move finished off the already moribund “two state solution” involving the creation of a Palestinian state in the West Bank and Gaza with occupied East Jerusalem as its capital.

Tel Aviv was chosen as the venue for this year’s Eurovision after Jerusalem, which hosted the events in 1979 and 1999, claimed it did not have the financial resources to stage this one. Israel has taken part in the contest since 1973 because its national television broadcaster is a member of the European Broadcasting Authority although Israel is not, in terms of geography, European. Tunisia, Morocco and Lebanon have refused to attend although they are also entitled to participate for the same reason as Israel does.

This year there are 41 entries for the three stage contest which involves two qualifying rounds ahead of the final session where 22 countries will compete. It is interesting to note that among the five countries that permanently qualify — France, Germany, Italy, Spain and the UK — two are to be represented by Arabs: France by Bilal Hassani and Italy by Mahmood. Hassani, 19, is of Moroccan origin, while Alessandro Mahmoud, 26, is the son of a Sardinian mother and an Egyptian father.

Last week Barzilai accused those who have called for a boycott of this year’s contest of “spreading darkness.” Palestinians insist the “Boycott, Divestment, and Sanction,” BDS, movement should apply to Eurovision and urge singers and attendees to stay away. Roger Waters from Pink Floyd and British singer Peter Gabrliel contend that the contest should be shifted to another country because of Israeli repression of the Palestinians and denial of their national rights. Waters also demanded Madonna to cancel her guest performance in Tel Aviv.

Dress designer, Vivienne Westwood, filmmaker Mike Leigh, actor Stephen Fry, and author Yann Martel joined Waters, Gabriel and another 50 luminaries to demand that the BBC “act on its principles” and press for the competition be held elsewhere due to Israel’s “systematic violation of Palestinian human rights.”

Naturally, the BBC demurred. In 2018 Eurovision was watched by 186 million viewers around the world.

In a letter circulated by the pro-boycott camp charges “discrimination and exclusion (are) so deeply embedded in Israel (that) Eurovision’s claim to celebrate diversity and inclusion must ring hollow. Much more in tune with inclusivity” is the wide support across Europe for the Palestinian call for boycott of Tel Aviv. The group states that Israel is exploiting Eurovision “to distract attention from its war crimes against Palestinians.” Such strong language must worry Israel’s rulers.

Well aware of how it treats critics and activists, the organisers of this year’s contest demanded that Israel guarantee visas for all participants regardless of political opinion, religion or sexual identity and that all be granted freedom to travel around the country.

This demand compels Israel to suspend for the duration of Eurovision implementation of last year’s law permitting the authorities to refuse entry to activists supporting BDS. Israel Pubilic Security Minister Gilad Erdan responded to the demand by calling it “a disgrace (and) humiliation.” Israeli critics of the law said the “border control” law is meant to effect “thought control,” thereby denying freedom of speech.

The European Broadcasting Authority also demanded freedom of the press and freedom of expression for participants and insisted that Israel’s broadcaster be accorded independence when editing broadcasts. Similar demands were made of Azerbaijan and Ukraine when they hosted the contest. Since the final session of the competition is to be held on a Saturday night, as Israel’s Shabbat ends, the organisers also called for permission to be granted for rehearsals and preparation for the performances in spite of restrictions on work imposed by Orthodox Jewish religious prescriptions.

Pro-Palestinian demonstrations aimed at disrupting the contest are expected. Ten per cent of the cost of staging the contest have been allocated to security. Eurovision 2019 has become a headache for Israel as well as organisers.