Japanese tradition still dictates the emperor should be a man - GulfToday

Japanese tradition still dictates the emperor should be a man 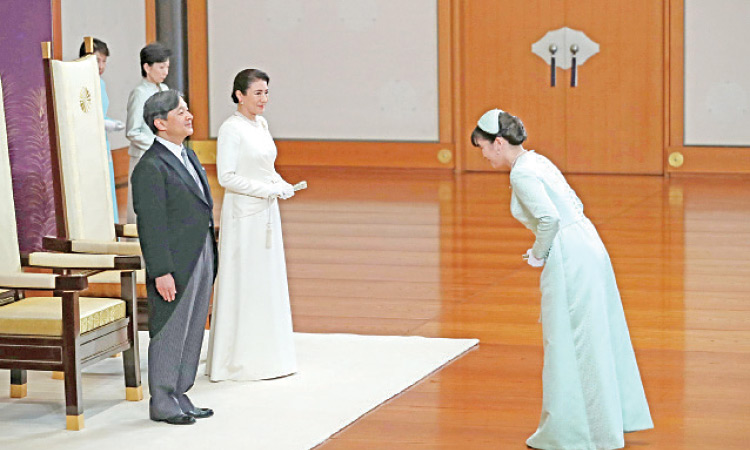 Japan’s new Emperor Naruhito (left) and Empress Masako listen to congratulatory words from Princess Mako during an event at the Imperial Palace in Tokyo. File/Agence France-Presse

Japan’s Imperial Palace has a new resident who earned an economics degree from Harvard, speaks at least five languages and has negotiated complicated trade deals as a diplomat.

It’s not Emperor Naruhito, who took the Chrysanthemum Throne on Wednesday. It’s his wife, Empress Masako. With millions of Japanese watching on television, she stood silently by Naruhito’s side in a tiara, sash and long white gloves as he addressed the Japanese people for the first time after assuming the position his father had held for nearly 30 years.

She wasn’t permitted to attend the ceremonial rites that came earlier in the morning, from which royal women were banned. In the audience, a lone woman — the only female minister in Prime Minister Shinzo Abe’s Cabinet — stood quietly in the back.

The symbolism of Masako’s circumscribed role was hard to miss in a nation with one of the biggest gender inequalities in the developed world when it comes to what women are paid and the number in politics and executive positions.

Perhaps no place in Japanese society encapsulates the country’s gender imbalance more powerfully than its imperial household, steeped in two millenniums of tradition as the world’s longest-running monarchy.

Discussions of the royal family and imperial law bring out the gender biases that are no longer explicitly expressed elsewhere in Japanese society, according to Jeff Kingston, a professor at the Tokyo campus of Temple University.

“It’s patriarchal, antediluvian attitudes,” he said. “The problems that are besetting the monarchy are a microcosm of problems besetting the population in general.” For all of her accomplishments, Masako has long lived in a position familiar to many Japanese women of her generation: the shadow of her husband.

The daughter of a diplomat, a commoner, she once had a promising career as a foreign service officer. By many accounts, she has struggled to adjust to the role of sheltered royal wife. Shortly after she was engaged to Naruhito in 1993, she was criticised for being too forward because she walked through a doorway ahead of her husband, and impudent for speaking 28 seconds longer than he did at a news conference announcing their impending betrothal. (Yes, someone counted.)

Intense pressure to produce an heir became a national obsession and is said to have contributed to stress-related health problems officially described by the imperial household as “adjustment disorder” but widely believed to be a form of depression.

She never gave birth to a son — only a daughter, Princess Aiko, who is now 17 and will be required by law to relinquish her royal status when she marries. That has left the monarchy in a bind. When it comes to Aiko’s generation, there’s only one viable heir: her cousin, Prince Hisahito, a 12-year-old who began junior high school last month.

The shortage is forcing the Japanese public to engage in a debate it seems politicians would rather avoid: Should women be allowed to serve as emperors? Polls show the Japanese public overwhelmingly supports the idea of a female emperor, with three-quarters saying they would welcome a change in laws.

After all, monarchies elsewhere in the world have adapted laws and traditions to permit women to rule. Japan has had eight female emperors in what is believed to be more than 2,600 years of continuous royal succession, albeit only as caretakers when there wasn’t a male heir available. In fact, the imperial law expressly banning women from becoming emperors dates only to the 19th century.

In interviews on the streets of Tokyo, where people were enjoying a 10-day holiday that coincided with the imperial transition, the dominant view was that a female emperor would be welcome, or at least acceptable. “Why do you have to have a rule against women?” said 15-year-old Yuni Iizuka, who was out on the town with her mother.

She said that in contrast to her mother’s generation, there was not widespread discrimination against girls her age, but that a female emperor would nonetheless send an important message. “I want women to be empowered in society,” she said.

Fukiko Ochiai, who at 58 is three years older than Masako, said she empathised with what the empress went through, having herself given up her full-time job when she gave birth and later returning as a part-time worker at a bakery.

“I was so happy such a woman got married into the imperial family,” said Ochiai, who was visiting Tokyo from her home in Chiba. “But her role was so limited. If only the imperial family would let her have her opinion and use her diplomacy.”

Even so, she said that she personally felt the question of female succession was premature because there are still male heirs, and that tradition still dictated the emperor should be a man. “I want Japan to preserve its unique culture,” she said. “We still have a boy.”

In the early 2000s, when it was looking doubtful that either of the princes’ wives would give birth to a son, Japanese lawmakers briefly discussed passing a law allowing for a woman to take the throne. But the debate was dropped as soon as Hisahito was born in 2006.

“The whole country had a sigh of relief in a way,” said Takako Hikotani, a professor of modern Japanese politics and foreign policy at Columbia University. “I was slightly frustrated they didn’t continue the discussion ... . People would rather not talk about it, and everybody happily dropped the issue.”

Hikotani said there isn’t a strong voice advocating for a change in laws in Japanese politics because progressives who might champion gender equality don’t put much stock in the imperial family anyway. That matters little to Kei Yamashita, 16, who was visiting the Meiji Shrine in Tokyo with his mother and grandfather to celebrate the ascension of the new emperor. To him, it’s obvious that it’s time.

“It is tradition, but it’s important for culture to adapt,” said the high school sophomore. “I think we’re way behind culturally on what women’s roles should be.”

Saito Satomi, who recently graduated college and began work at a trading company where there are no women in management roles, said having a woman take up such a prominent, symbolic role would help all women in Japan feel it was possible to rise up the ranks in society.

Perhaps even as the emperor’s wife, Masako may still fulfill that role, said the 22-year-old. “Maybe she’ll be a new type of unprecedented empress,” she said.