Turkey is playing both Russia and US - GulfToday

Turkey is playing both Russia and US 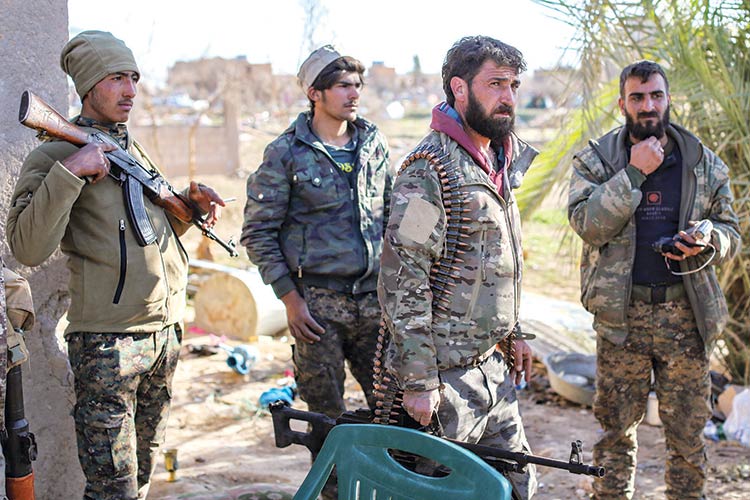 Syrian fighters preparing for their next move.

During the past week the Western press has reported Russian and Syrian bombing of north-western Idlib province and the flight of thousands of civilians from targeted villages. Writers complain that Moscow and Damascus have been violating the “de-confliction” deal reached last year between Russia and Turkey with the aim of halting an all-out military operation against Idlib.

Those who have reported the situation in this way are indulging in promulgating “fake news.” Russian and Syrian government forces are not in breach of the agreement reached by Russian President Vladimir Putin and his Turkish counterpart Recep Tayyip Erdocan on September 16th, 2018. Turkey and the Al Qaeda affiliated groups holding Idlib did not implement the agreement from day one.

The deal involves the imposition of a ceasefire across Idlib, the creation of a 15-25 kilometre wide buffer zone around Idlib, the withdrawal from this zone of heavy weapons held by all groups and of all radical fighters. Turkey is obliged to separate radicals from “rebels” (although this is an impossibility) and demobilise and disarm radical factions. Finally the highways connecting Damascus with Aleppo and Latakia are to be reopened. All sides are meant to observe a ceasefire. Al-Qaeda elements were included in the ceasefire although, according to the UN, they are “terrorist” groups and not entitled to such treatment.

Turkey, its surrogate “rebels” in the Free Syrian Army and Tahrir al-Sham and its equally radical partners did not observe the terms of the agreement. Heavy weapons, rebel and radical fighters were not pulled out of the buffer zone, heavy weapons remained, and the ceasefire was not honoured. Instead, Tahrir al-Sham expanded its control of Idlib from 60 to 100 per cent and continued to mount attacks on the Syrian army and government-controlled villages and towns in northern Aleppo and western Hama provinces. Drones were launched at Russia’s military base in Latakia, south of Idlib.

A Western colleague who recently visited Aleppo and a Christian village in Hama near the edge of the ceasefire zone told Gulf Today that fighters there constantly fire mortars into residential areas in breach of the ceasefire.

Moscow and Damascus agreed to this deal under pressure from the UN, international humanitarian organisations and Western powers. They argued a frontal assault against anti-government armed elements in Idlib would result in a humanitarian disaster for the province’s 2.5-3 million civilian residents and a fresh flood of refugees into Turkey. Ankara continues to warn against both outcomes if an all-out assault is mounted on Idlib, which has become al-Qaeda’s western-most base.

But, by allowing Idlib to fall under Tahrir al-Sham’s domination, Ankara created a new threat to itself and Europe at a time the West focused on the battle against Daesh. By insisting that Damascus and Moscow continue to exercise restraint, the UN and Western powers (and media) are protecting al-Qaeda’s base in Syria and giving the radical group time to consolidate its hold on Idlib.

Therefore, the refusal of Turkey and its clients to carry out their commitments has provided just cause for attacks by Russian and Syrian planes and Syrian troops who have been constantly targeted by Tahrir al-Sham.

Moscow has tolerated Ankara’s inaction for so many months because Russia seeks to weaken the Nato alliance by prompting Turkey to defect. This policy has been a failure. Turkey is playing both Russia and the US and fully intends to benefit from this game although, all too clearly, the game is up. Russia is fed up with Ankara’s duplicity.

While the Russians and the Syrian army have postponed military action, Tahrir al-Sham has entrenched itself in the whole of Idlib under Turkish and international protection. Erdogan entertains the vain hope of recruiting Tahrir al-Sham fighters for his plan to take over large stretches of northern Syria by encouraging the radical group to seize the Syrian-Turkish border zone west of the Euphrates River while elements of the so-called Free Syrian Army battle US-backed Kurds in the east.

Meanwhile, encouraged by the US, Syrian Kurds invited Arab tribal and community leaders living in the area they control to a conference at the town of Ain Issa. The aim was to present a solid front when negotiating with Damascus.

In his address to the event, Kurdish leader Mazloum Kobani said Damascus would have to recognise the Kurdish administration in the northeast and the special status of the Kurds’ alliance with Arab elements and its role in defeating Daesh.

He stated there would be no peace without recognition of Kurdish minority rights.

Damascus responded by accusing the Kurds and their allies of “treason.”

The Kurds have been under pressure to reach a deal with Damascus by the US decision to withdraw most of its troops in northern Syria and Turkey’s threat to invade the Kurdish-held area which constitutes 25 per cent of Syria. In recent months the Kurds have abandoned their demand for an autonomous Kurdish zone in a decentralised, federal Syria. Damascus flatly rejects this demand.

Furthermore, Arabs living in the Kurdish dominated area, who account for 70 per cent of the population, do not want to live under Kurdish rule and have been making separate arrangements with the Syrian government, undermining the claim for continuing Kurdish administrative control of Arab areas.

Moscow has accused Washington of using the Syrian Kurds to undermine the Russia-Iran-Turkey-sponsored Astana format for negotiations between the government and insurgent groups and to secure a long-term US presence in Syria. The Russian Foreign Ministry has charged the US with trying to create a Kurdish separatist state in Syria, in violation of the principle of preserving Syrian territorial integrity and sovereignty laid down in the UN charter and upheld in resolutions dealing with the Syrian war.

Washington has been doing just this by intervening in Syria over the past eight years. The US began by providing the Turkish-founded Free Syrian Army with “non-lethal” aid, then trained and armed “vetted” fighters, and finally, supplied troops and air cover to support the Syrian Kurds in operations against Daesh. The Kurds expected long-term support but found the US is prepared to abandon them, leaving them desperately trying to preserve their militia and assert their rights by using the territory they hold as leverage in negotiations with Damascus. So far, this has failed.