In volatile Venezuela, the military matters most - GulfToday

In volatile Venezuela, the military matters most 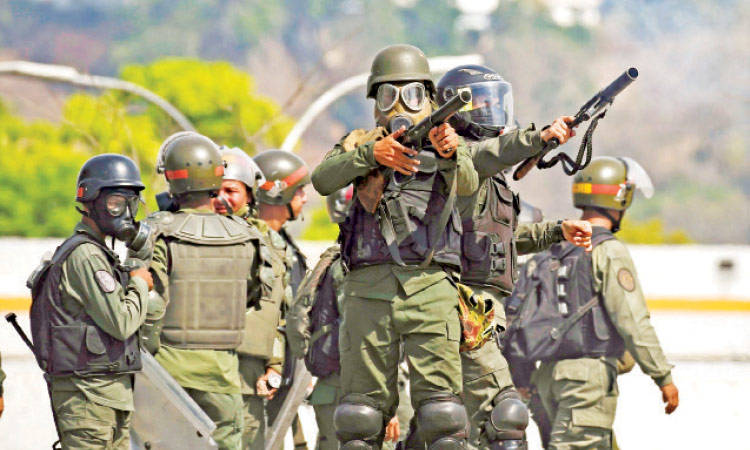 Security forces confront anti-government protesters during clashes in the surroundings of La Carlota military base in Caracas during the commemoration of May Day in Venezuela. Agence France-Presse

Venezuelan opposition leader Juan Guaido triumphantly appeared outside La Carlota air base here Tuesday with a group of soldiers wearing blue armbands that signified support for his efforts to topple the government of President Nicolas Maduro.

“To all the brothers of the armed forces, this is the moment,” Guaido declared, anticipating what he called the “final phase” of the opposition campaign to bring down Maduro. “We know that the pain of the armed forces is the same pain of a people enduring hunger and difficulties. We all want a change.”

By the end of the day, however, Maduro had declared an end to the “coup,” his supporters were denouncing “traitors” in the armed forces, and about two dozen defecting soldiers had taken shelter in the Brazilian Embassy.

What Guaido — who proclaimed himself interim president in January — apparently viewed as a broad military uprising had failed.

“They will not be able to divide” the armed forces, Maj. Gen. Jesus Suarez Chourio, the Venezuelan army chief, vowed in a Twitter message, while denouncing the soldiers who deserted as “lackeys of the empire.”

“They will not again deceive and sell la patria. We are eminently Loyal! And Patriots!” He was among several members of the country’s top brass who reaffirmed their support for the president.

The Venezuelan military is widely viewed as the key bloc keeping Maduro in power, and for now the command appears to be sticking with him despite a string of desertions and reports of minor uprisings within the ranks.

US officials have asserted that Defense Minister Vladimir Padrino Lopez was among a core group of Maduro aides in talks with the opposition, an allegation the Venezuelan government rejected. Both sides in the country’s ongoing political crisis have assiduously sought the support of the generals, and Washington has made public and overt appeals to military officials, to gather intelligence and to encourage defections.

“We have the tools we need and we’re using the full range of these tools,” Navy Adm. Craig Faller, the top US commander for Latin America, said Wednesday in testimony before the House Armed Services Committee. “We’re using assets diligently and quietly.”

To date, though, Guaido and his US backers clearly have been unable to flip Venezuela’s military establishment.

Experts said the reasons have to do less with ideology than with the evolution of Venezuela’s armed forces as a lucrative partner in a government that doles out financial and other benefits and sundry perks to its military partners. Military officers have been linked to industries as wide ranging as the oil sector, mining, the food import business and drug trafficking.

Maduro and his predecessor, the late Hugo Chavez, liberally bestowed general and admiral ranks on hundreds of officers in a bid to help cement their loyalty.

“The leadership of this armed structure acts as an armed political party, and its function is to channel and communicate at the service of the regime,” said Jose Machillanda, a professor at Simon Bolivar University in Caracas.

Rather than serving as a defender of “liberal democracy,” Machillanda said, the armed forces have become the promoter and protector of Maduro’s political agenda.

Critics such as Machillanda, an ex-colonel, see self-interest at the core of the military’s continued backing of Maduro and worry that the armed forces establishment has become so intertwined with his administration that there could be serious legal and financial consequences if he is dislodged.

“The military is very self-interested,” said David Smilde, a sociology professor at Tulane University and expert on Venezuela at the Washington Office on Latin America, a research and advocacy group. “They have huge economic interests and are very compromised in the corruption and human rights abuses. They want things to continue as they are.”

Guaido and his supporters, including US officials, have spoken repeatedly of an amnesty for military officials who agree to switch sides. But the somewhat vague guarantees do not seem to have reassured generals and others that they would not face a bleak future in a post-Maduro Venezuela.

“They have very high exit costs,” Smilde said. “A lot of them assume they will be strung up, either by the people or the next government.” Some, too, have ideological motivations. Many rose in the ranks during the administration of Chavez, a former career officer whose “Bolivarian” revolution remains a touchstone for Chavistas, as his many disciples are known.

Switching sides would be unthinkable for many steeped in Chavez’s depiction of the United States as a kind of evil empire.

“For many Chavistas, including some senior military officials, the Bolivarian revolution that started two decades ago must continue,” said Michael Shifter, president of the Inter-American Dialogue, a Washington think tank specializing in Latin American issues. “The regime’s collapse would mean the end of that revolution.”

At the same time, the opposition says that hundreds of soldiers and some high-ranking officers have deserted, many fleeing to Colombia. Maduro’s government has boasted of busting several coup plots led by former officers, and experts said that Cuban advisers were helping him monitor and contain discontent within the ranks.

The main branches of Venezuela’s military — the army, air force, navy and national guard — number about 125,000. Maduro also has at his disposal between 500,000 and 1 million members of the Bolivarian Militia of Venezuela, a lightly trained pro-government faction.

This week, as Guaido was proclaiming the final phases of what he calls “Operation Liberation,” he was accompanied by his longtime political mentor, Leopoldo Lopez, who had been under house arrest for inciting violence in 2014 electoral protests. Lopez said that military officials had freed him from house arrest.

Word soon filtered out that Maduro had fired his police intelligence chief, Manuel Ricardo Cristopher Figuera, a general and longtime aide-de-camp to Chavez. Figuera was reportedly implicated in Lopez’s release and in Tuesday’s unsuccessful military uprising.

In a subsequent statement, Figuera continued to refer to Maduro as his “commander in chief,” but denounced rampant “corruption” and said all the country’s woes could not be blamed on el imperio” — the empire, short for the United States.

“The disproportionate corruption that the country suffers from, and which many high-level public servants practice as a sport, is that also the fault of the empire?” asked Figuera amid rumours that he had been arrested.

A pro-government legislator, Gerardo Marquez, denounced the former police intelligence chief as one of the “traitors” who led the group of more than 90 “deceived” soldiers and security officers who defected to the opposition on Tuesday. The legislator also implicated a national guard colonel as being among the “coup” plotters.

In an interview with Fox Business Network, US Secretary of State Mike Pompeo called Figuera the highest-level defector to date from Maduro’s security services and asserted that “dozens” of other military personnel abandoned the government on Tuesday.

Still, from all appearances the Venezuelan high command remained united behind Maduro — at least for now.