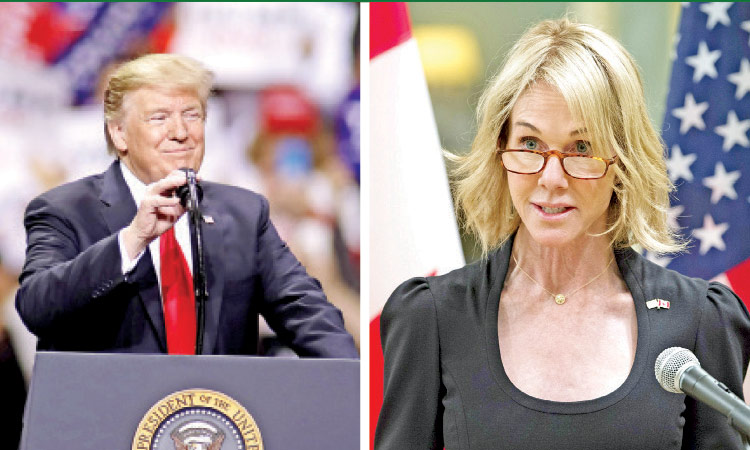 When Trump officially nominates Kentucky socialite Kelly Knight Craft as ambassador to the United Nations next week, the US will have officially killed off any semblance of making efforts toward international diplomacy.

Knight Craft has been the US Ambassador to Canada since 2017, but the veneer of preparation for the UN post is quite thin. She is a monied socialite and billionaire donor to the Republican party with ties to Kentucky’s high society. Wife to a major US coal producer, she has said she “respects both sides of the climate change science”.

Can we really afford to have someone so unprepared and uninformed about world affairs in one of the most important political positions representing the country? Yes, apparently, since our president is the perennially unprepared and chronically uninformed Donald Trump — traits which were proven by the findings of the Mueller report.

That Knight Craft bought her way into US politics is nothing shocking: so did many of our members of congress. But her thing is really more horse derbies and local Kentucky basketball than international law, human rights and diplomacy. Thanks to her generous fundraising and donations to former president George W Bush, however, she was named an alternate candidate to the UN in 2007.

With many of his cabinet nominations, Donald Trump has thrown qualities like experience and educational preparation to the wind and instead favored big money supporters and acolytes. This appointment sends another, more visible message that the US not only has no idea what it is doing on the world stage, we also don’t care. While Knight Craft may be charming and a “doer” (as friends and family have characterized her), running five kilometers a day hardly makes you a candidate to represent the United States at the UN.

Outgoing French Ambassador Gérard Arud was right in his interview in the Atlantic when he said, “The role of the United States as a policeman of the world, it’s over.” Not that that is a bad thing. The United States, with its long history of invading and destabilizing other countries, hardly has the right to preach human rights and rule of law. But that doesn’t mean that just anyone should represent our country at the United Nations. Diplomacy should still matter.

When I turned 18, I moved to Argentina to begin university. While living there, I spent a summer gallivanting up and down the coast of Brazil with a friend from Australia. It was 2003, and Bush had just invaded Iraq. Brazilians had a lot of questions for me about the war and whether I agreed with US policy. I didn’t. But I felt young and unprepared to answer their questions that, perhaps because of my age and my naïveté, seemed hostile to me.

So I started telling people I was Canadian. At one hostel we stayed at in the north of Brazil, I met a young Israeli man who saw my US passport and asked me why I was telling people that I was Canadian. The question threw me off-guard, and I answered with complete honesty: “I am ashamed of my country.” He told me that he felt similarly about his own country, in terms of how the Israeli government treated Palestinians — but he added that he still told people where he was from.

That statement has always stayed with me. Once again today, I am ashamed of my country – but now I have the courage and vocabulary to discuss it openly, honestly and vigorously. I tell people where I am from and I talk about what I want changed.

I can only hope that Knight Clark will be open to learning from, and listening to, other diplomats at the United Nations. Maybe she will leave this experience similarly critical of her own country — and in a position to do something about it. But I doubt it.