GOP have a post-Trump identity crisis on the horizon - GulfToday

GOP have a post-Trump identity crisis on the horizon 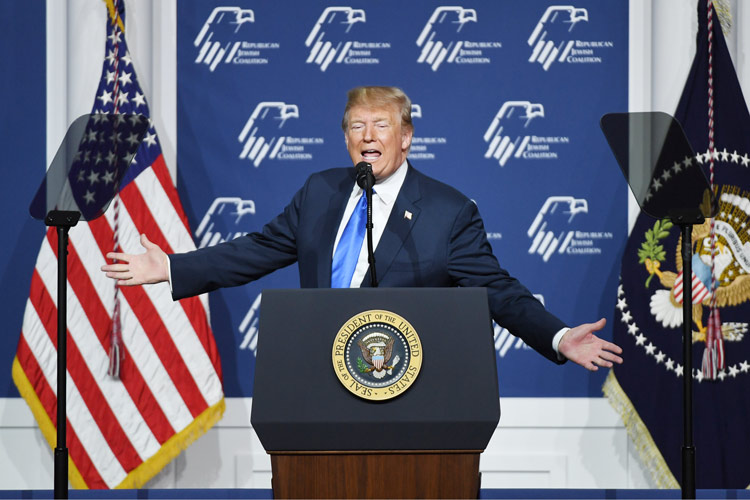 Republicans are enjoying their ride in the White House and basking in the glow of a divided Democratic presidential field, but a monumental identity crisis is looming for the GOP.

Whether you think President Donald Trump won’t be president in two months, two years or six years, Republicans are going to have a difficult time moving on to the next chapter.

At this stage, the Republican Party is primarily a collection of Trump followers. While a majority of GOP primary voters didn’t support candidate Trump early in the 2016 race — some Republicans were skeptical of his conservative bona fides, and others outright opposed him — the party has since largely coalesced behind the president.

Trump’s job approval rating among Republicans has been hovering between 88 per cent and 90 per cent, and hasn’t dipped below 86 per cent in more than seven months, according to Gallup. Anecdotally, the most vocal GOP opponents of the president are retired or retiring politicians or senators not up for re-election in a particular cycle, because they are not at risk of a primary backlash.

Conservative ideology and issue positions still matter in some contexts, but allegiance to Trump is the most important litmus test in the GOP right now. The evolution is best explained by “attitude and gratitude,” as conservative CNN political analyst Scott Jennings recently wrote. Even initial Trump skeptics have come to enjoy the way the president deals with Democrats and the media and are appreciative of his judicial appointments.

That legacy is important, and may even earn the president a second term, but it won’t make the transition to a post-Trump Republican Party any easier.

Normally when a president leaves office, he fades into the background, at least temporarily. Trump won’t.  When he’s out of the White House, he’ll still be on Twitter and still command media attention. He might even have his own TV show again.

Trump won’t be painting portraits of military veterans from a ranch in Texas.

His consistent public presence will make it difficult to transfer power to the next GOP presidential nominee, or any other leader, because that person won’t be Trump. While he’ll be physically out of the White House, Trump won’t be eager to give up power, and his followers might not even be looking for a new leader.

Vice President Mike Pence probably believes that all Republicans will just move behind him whenever Trump is gone. But it won’t be that simple, in part because Pence doesn’t command the same aura. He’s a safe politician (rather than a showman) who fits the traditional GOP rather than the Trump GOP.

It’s not uncommon for a party to take on the image of its president, but Trump is holding together an unorthodox GOP coalition by force of his personality. Most Republicans have maintained their support for the president, even though he has tossed out traditional party stances on some issues (trade, for example) because they trust him as a messenger.

But without Trump, it will be hard for the GOP to keep anti-free trade Democrats in the tent. And getting back Republicans who left because they were repulsed by Trump may take time.

Once this president is out of office, the GOP will be saddled with choosing someone new to carry the party mantle with Trump as the compass. There will be Republicans who step up and try to walk, talk and act like Trump; and other candidates who will try to return the party to its traditional roots — all while Trump will be chiming in on Twitter.

It’s not a dynamic that will necessarily prohibit Republicans from winning future elections, particularly if the Democrats keep pushing further to the left. But for those Republicans just trying to wait out the president and ride out the storm, Trump will overshadow the GOP for years beyond his presidency. And it’s unclear if the Republican Party can, or will, ever return to what it once was.