‘Ministry of Possibilities’ will boost quality of life - GulfToday

When His Highness Sheikh Mohammed Bin Rashid Al Maktoum, UAE Vice President, Prime Minister and Ruler of Dubai, says the word “impossible” does not exist in UAE’s dictionary, he means it.

The regular successful launching of several mega initiatives to fulfill the goals of Vision 2021 is a shining example of how words are followed by action.

The announcement on the world’s first virtual Ministry of Possibilities to incubate and develop radical solutions for the government’s most critical challenges is the latest to join the list of such remarkable initiatives.

Sheikh Mohammed has already issued directives to start work on the first phase of a number of national programmes in the form of four departments. These include the Department of Anticipatory Services, Department of Behavioral Rewards, Department of UAE Talent and Department of Government Procurement.

The beauty of it all is the visionary zeal. The UAE leadership foresees future trends and acts wisely to keep pace with developments. The Ministry of Possibilities represents the next generation of government operations and oversees key functions that require quick, bold and effective decisions. Its roles include applying design-thinking and experimentation to develop proactive and disruptive solutions to tackle critical issues, bringing together federal and local government teams and the private sector. Through its work, the ministry will instill a culture in which impossible challenges can be tackled effectively.

As Sheikh Mohammed himself outlined, “The reality we are experiencing in the UAE today is a product of unconventional leadership. We need modern systems to make our unconventional ambitions a reality. The future brings challenges that require constant government restructuring. The word impossible does not exist in our dictionary. It is not part of our vision and will never be part of our future.”

The UAE has remained a super model of development through its scientific, economic and social achievements that ensure a better future for Arab and Islamic nations.

Last year, for example, the country launched KhalifaSat, the first Emirati-made satellite. The UAE accomplished a historic diplomatic achievement when the UAE passport became the highest ranked passport in the world.

The UAE has maintained its position as the largest international donor of official development aid compared to national incomes for the fifth consecutive year, with a rate of 1.31 per cent, which is about twice the suggested rate of 0.7 per cent, as identified by the United Nations.

The UAE continued achieving leading positions in world competitiveness reports, and occupied the first position in the Middle East and North Africa, and the 17th position internationally.

The objective of key governmental programmes is to help provide the best services to the people. The Ministry of Possibilities will help redefine the concept of government by creating a platform for addressing radical changes in government systems.

By adopting innovative models and working methods to take calculated risks, the ministry will be able to showcase a new model for next generation government operations and present it to the world so as to achieve the noble goal of improving the people’s quality of life. 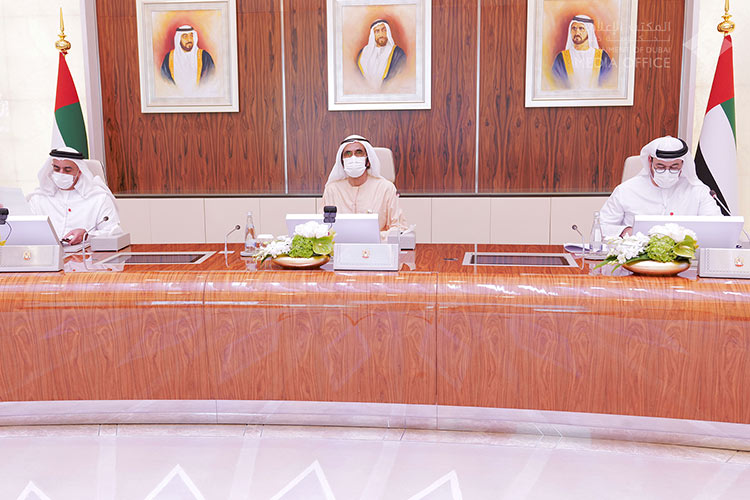 The strategy seeks to encourage business sector to adopt a strategy to develop futuristic industries and advanced technologies, and promote the competiveness of local industry on the global level.