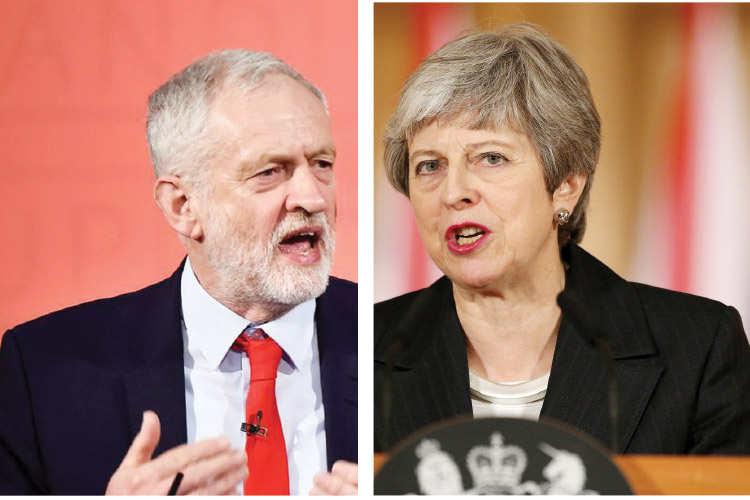 Jeremy Corbyn and Theresa May.

It is only just beginning to sink in how disastrous Theresa May’s failure is for the Conservative Party. The opinion polls have recorded huge drops in Tory support. The most recent from ComRes put the Tories on 23 per cent, which may be an outlier but there is no reason why they should not fall further.


Tory MPs who have been on the doorstep during the Easter break call it the “recess from hell.” The prime minister herself favours a spot of light canvassing when she is off duty. If she found time to knock on any doors in her Maidenhead constituency before or after marshalling a 10-mile run yesterday, it would be interesting to know how that went.

The local and European elections next month are the least of the party’s problems. The failure to deliver Brexit is one of those points at which history turns and takes a new direction.

The full seriousness of the situation has not sunk in yet because many people still assume we are going to leave the EU. The fury directed at the Tories so far is because Brexit has been delayed. It is just a foretaste of what is to come when more people realise that we are unlikely to leave in the foreseeable future, if ever. Nigel Farage is going to dominate politics for some time to come.

So what is the prime minister’s plan? Usually, it is to stay in office for another week. But she has just been walking in the Welsh mountains with Philip, her husband, and that is where she has time to think strategically about the longer view.

Two years ago she decided in Snowdonia to hold a general election. As it turned out, this was a bad idea, although the election itself made sense — it was the terrible campaign and the manifesto that were the mistakes.

This week she had a chance to contemplate the end of her premiership and work out how to make the best of it. She knows that the only thing that matters is getting us out of the EU. If she succeeds she will lose her job, but if she does not she will lose her job and go down in history as a failure.

But she cannot do it. The talks with Labour are going nowhere because it is not in Jeremy Corbyn’s interest to help her. If she adopted all of Labour’s Brexit policy, permanent customs union and all, the deal wouldn’t go through parliament because most of the Tory party would oppose it and a large number of Labour MPs would vote against any form of Brexit. She could offer to make Corbyn prime minister temporarily and it still wouldn’t work.

What else can she do? She cannot hold a general election. Her party won’t let her. Her last option is another referendum. It would be a desperate gamble, but the situation is desperate and it has a (remote) chance of working. If she asked Conservative MPs to vote for it, a bill could pass with Labour support. But it would probably be a referendum offering a choice between her deal and remaining in the EU — because parliament would refuse to put a no-deal Brexit on the ballot paper — in which case Remain ought to win comfortably. So I doubt if her party would let her do that either. The 1922 Committee of backbench Tory MPs meets on Tuesday to discuss changing its rules to allow an early change of leader. Proposing a referendum would be one way to guarantee such a thing.

It seems May is trapped. It may not be her fault in one sense. Brexit was frustrated by an unholy alliance of Tory no-dealers and Labour MPs who refused to vote for the deal they said they wanted. But she is prime minister and she must pay the price.

Does anyone in the party have a better idea? A common view among supporters of a no-deal Brexit is that they should get Boris Johnson in so that he can prepare the country for leaving on so-called WTO terms. But parliament is opposed to it, and has shown that it has the power to prevent it.

The response to that used to be that Johnson would call a general election and a Tory government with a mandate for leaving without a deal would be elected with a majority. That doesn’t look plausible now. Johnson is not the vote-getter he once was, and even in his Heineken days as London mayor, reaching parts of the electorate other Tories couldn’t reach, he would struggle to overcome the current Tory slump in the opinion polls.