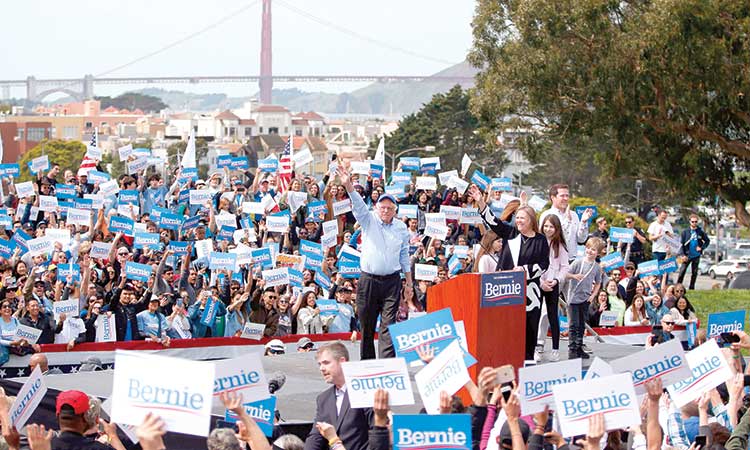 Bernie Sanders speaks during a campaign rally at the Great Meadow Park in Fort Mason in San Francisco. AFP

“Sometimes things have to get ugly before they get better,” said Melissa Mallaber, a 46-year-old social worker who attended Sanders’ rally in Pittsburgh on Sunday. “There’s such a thing as necessary evils in life to restore the balance.”

Mallaber said she cast a write-in vote for Sanders in 2016 rather than go along with a Democratic establishment choice who wouldn’t take bold action on issues like health care and climate change. “People had to wake up,” she said. “If we had another Clinton in office what would have changed?”

Such disaffected voters who are hostile to the Democratic establishment appear to be only a narrow slice of the Vermont senator’s base. But elections are often won on the smallest margins. In 2016, a portion of them backed Green Party candidate Jill Stein in the general election. While Stein barely got 1 per cent the vote overall, that amounted to 132,000 ballots across Wisconsin, Michigan and Pennsylvania, three pivotal states Trump won by a collective margin of about 77,000 votes. Sanders rallied in all three states last weekend.

“It’s a pretty small minority of his support,” said Neil Sroka, a spokesman for the liberal activist group Democracy For America. “But when you’re dealing with an election that was as close in terms of raw votes in 2016, every vote matters. And so that matters.”

Some establishment Democrats are fretting that Sanders’s sweeping progressive proposals and front-runner status are pushing the party to the left, risking the votes of moderate suburbanites who helped the party win back control of the House in 2018. Those concerns have helped fuel interest in a run by former Vice President Joe Biden, who is expected to announce a decision about making a bid later this month and already leads Sanders in early polls.

On the flip side, some Sanders backers warn that Democrats could miss an opportunity to win disenchanted or disengaged voters if they pick a candidate who’s seen as representing the status quo.

“Democrats should have as much problem with ‹Bernie or bust’ as they do with ‹Never Bernie.’ Ultimately, whoever the nominee is, it’s too important to do protest votes or sit on the sideline,” said Jesse Ferguson, a Democratic consultant who worked on Clinton’s 2016 bid. “Whether it’s corruption or kids in cages or health care, we’ve seen over two years of reasons to support whoever the nominee is, regardless or whether it’s your first choice.”

Sanders campaign manager Faiz Shakir said one of the Vermont senator’s strengths is to inspire disaffected Americans, particularly young people, “who didn’t vote for Hillary Clinton or sat out the 2016 election” to get to voting booths next year.

Some Sanders supporters interviewed at his weekend rallies see in Trump’s election a silver lining of Democrats being pulled in a more anti-corporate and pro-worker direction. Sanders disagrees that Trump’s victory was worth it, having campaigned for Clinton in 2016 and often calling him the “most dangerous president in modern American history.” But some of his voters say the night is darkest before dawn.

“I had this thought that maybe it’s gotta get real bad to get better,” Donna Dunaj, 76, said at Sanders’ rally Saturday in Macomb County, Mich. “In other words, Trump wins, but we wouldn’t let it happen again.”

Dunaj said she backed Stein in 2016 and doesn’t know how she’d vote in 2020 if Sanders isn’t the nominee.

The die-hard Sanders fans often describe politics as a binary struggle between a wealthy ruling class and ordinary workers who are being exploited, and they see centrist Democrats as part of the problem. And they’re wholly unpersuaded by the argument that they should vote for a moderate Democrat over a Republican as the lesser of two evils.

“I don’t like that mentality,” said Ronnie Hasting, a 36-year-old union ironworker who attended Sanders’ Pittsburgh rally. “Removing Trump isn’t the only goal. Electing a corporatist Democrat is counterproductive, hence my vote for Jill Stein in 2016.”

Hasting plans to back Sanders in the 2020 primary and said he’d consider voting for Sen. Elizabeth Warren if she’s the nominee. If it’s Biden, Sen. Kamala Harris or former Congressman Beto O’Rourke, “then I’ll vote Jill Stein again,” he said.

In 2016, a 10th of Sanders primary voters either backed another candidate or abstained in the general election, according to a study of about 50,000 people that was analysed by political scientist Brian Schaffner; four in five Sanders voters backed Clinton, and 12 per cent pulled the lever for Trump.

“The folks who are hardcore Bernie-only people — a good amount of that stems from the way they feel Bernie Sanders was mistreated in the 2016 primary by the Democratic establishment,” Democracy for America’s Sroka said. “If there’s a fair and open process this time, that can repair a lot of those relationships. I think we’re seeing that so far.”

Michael Hogel, a 59-year-old retired educator in Pittsburgh, said removing Trump is “of utmost importance” in 2020. He liked what he saw at the Sanders rally but also said he’d consider Harris, O’Rourke and South Bend Mayor Pete Buttigieg in the Democratic primary.

Hogel, who voted for Clinton in 2016, said he “heard a lot of the ‹didn’t like either candidate’ thing” among his peers, although “I don’t think most of them really thought Trump would win.”

Joe Trippi, a Democratic strategist and veteran of presidential campaigns, said it’s “way too early to know” how the Bernie-or-bust phenomenon will shape 2020.

“Hillary Clinton is not in the race,” he said. “He’s got 16 or 17 other people running for the nomination right now, many of them arguably as progressive as he is.”

He said candidates like Warren, O’Rourke and Buttigieg can appeal to Sanders voters in different ways. And he argued that Trump’s presidency will motivate many to back the Democrat as opposed to staying home or voting for a third-party candidate.

“I think Trump does a pretty good job every day of putting up a big red warning sign of — hey, don’t do that,” Trippi said.

Yet for some Sanders supporters, it’ll be a tough sell if he loses the nomination.

Hope Larkin-Begley, a computer programmer in Pennsylvania, came to the rally wearing a Sanders 2020 button, hat, sign and a peace-sign shirt with his name on it. She voted for Stein in 2016 and has no regrets about the outcome, saying the election of Trump “ripped the veneer off the ruling class” and steered the Democratic Party in the more left-wing direction of Sanders.

“If Hillary had won we’d be going down the same incrementalism road,” she said. “It’s better to have a buffoon rather than a civilized smooth-talking charlatan.”