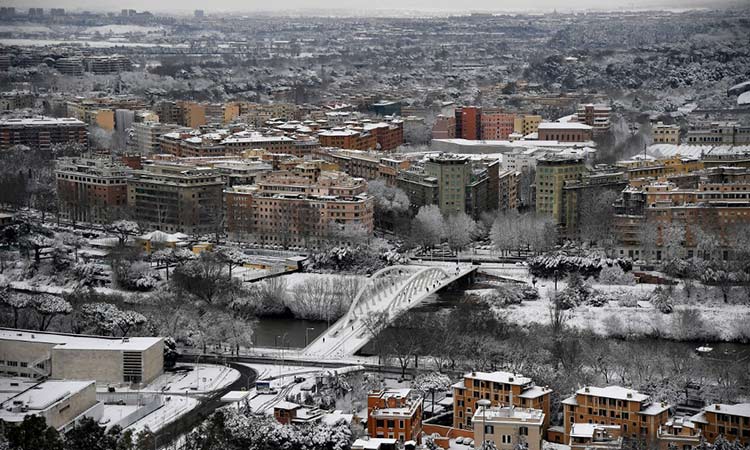 A panoramic view of Rome covered by snow.

We live in an age marked by the return of right-wing, anti-democratic ethno-nationalism, and by the rise of anti-intellectualism. So perhaps it shouldn’t be a surprise that the world’s oldest academic institution is facing dangerous criticism from the demagogic far right.

Representatives from Italy’s governing League party in Emilia Romagna have questioned the University of Bologna in the regional assembly because one of its political sciences courses uses an (apparently) “anti-Salvini” monograph. The academic book, written by respected scholars, political scientist Gianluca Passarelli and sociologist Dario Tuorto, is published by Il Mulino, a major publisher. The volume properly labels the League as an extreme right-wing party.

The authors also claim that Salvini’s party displays fascist, xenophobic, and violent characteristics, recalling the interwar years or apartheid in South Africa.  According to the League, however, the Emilia Romagna region should trigger its anti-discrimination policies to protect students who are ideologically close to the party, and who may be discriminated against in such a university course (and exam).  Right-wing tabloids have provided a megaphone to spread the indignation even further. This may sound like a paradoxically funny story, but it is tremendously serious. It says a lot about the anti-pluralist features of the far right.

For the League’s regional representatives, universities should not promote “anti-party” material or “political propaganda”. Perhaps most worryingly they argue that because the professors are public servants, they should be “loyal” to the state.

Of course, a monograph which challenges some of the more “positive” public representations of a political leader is not against the overall state (let’s not forget that the state and the government are two different entities). And as such, statements like these appear symptomatic of an almost authoritarian mindset.  There is also something else. Far-right activists are clearly trying to influence cultural agendas and public opinion by dismantling and shaping state education all across the western world.

In Italy, the League’s manifesto is aiming at include more professional and practical subjects in high schools, perhaps with a subsidiary intention of reducing the number of students attending universities – they are deemed to be progressive left-wing institutions. In some local councils, the party has been also trying to shut down reading groups in public libraries or influence the organisation of existing cultural events. The desire to remove writings that are based on data and scientific reasoning, or to question academic teaching, is, however, a step further. It is a worrying attempt to silence free voices and critical thinking along with the undermining of all forms of social and cultural opposition. It is like turning the clock back to Italy’s fascist years, pushing intellectuals and professors to conform to the ruling authority’s anti-democratic and anti-liberal ideology. This is the means by which authoritarian regimes and dictatorships rule.  The problem today is that ultra-nationalism, right-wing extremism, and racism are being normalised, masked by slogans and concepts such as patriotism, sovereignty, “our nation first(ism)”, or a post-ideological national populism.

The idea that the League is not an “extreme-right” party, and that higher education institutions must be faithful to the governing forces, also shows something specific about the current climate in Italy.

This is the country where the word fascism was invented and where a great-grandson of Benito Mussolini is running in the EU elections for Fratelli d’Italia, a small far-right movement allied with Silvio Berlusconi. This is also the nation where La Repubblica journalist Paolo Berizzi has been under state protection since February because neo-fascist groups are threatening him.

This fascistic nostalgia, these anti-democratic and sometimes violent undercurrents, are not coming out of the blue. They have been legitimised over a couple of decades. Since the arrival of Berlusconi on the political scene in the early 1990s, and through his political alliances with the League and the neo-fascist Italian Social Movement, lables such as “extreme” or “fascist” magically disappeared from the public discourse to be replaced by his own bizarre and vague definition of a “coalition of moderates”.