The Smollett case has become a vital story about race - GulfToday

The Smollett case has become a vital story about race 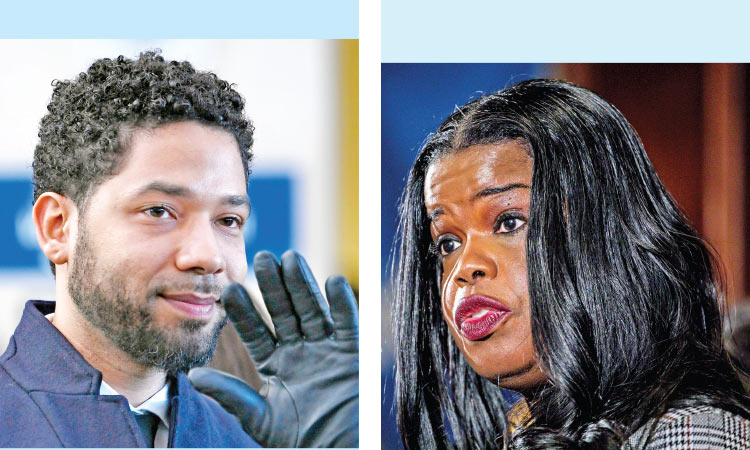 Set aside, for a moment, the issue of race in the Jussie Smollett case. Think of it first as an issue of darkness and light. Darkness as in the veil of silence and secrecy Cook County State’s Attorney Kim Foxx has draped over the machinations in her office that resulted in Smollett being able to proclaim his innocence in the lobby of the very courthouse in which he was supposed to get his comeuppance.

Darkness as in the shadow this case is casting over Foxx’s effort to operate a smarter, fairer justice system. Light as in the illumination that Foxx and her communications team should, but seem pathologically unwilling to, shed on a story that for better or worse — but largely for worse — continues to generate significant local controversy.

And light as in the new dawn that must break in the damaged relationship between “two separate yet equally important groups — the police who investigate crime and the district attorneys who prosecute the offenders,” to quote the famous intro to NBC’s “Law & Order.”

The background: On Feb. 20, Jussie Smollett, a gay, African-American TV actor, was charged with filing a false police report after allegedly staging a hate-inspired attack against himself in Chicago’s Streeterville neighbourhood in the early morning hours of Jan. 29. The alleged attack and the subsequent allegation that it had been staged became international news. But then on March 26, with no warning to reporters or police and no real explanation, Foxx’s office dropped all of the charges against Smollett.

The latest: On Tuesday the Sun-Times reported that on March 13, nearly two weeks before the Smollett exoneration controversy erupted, Foxx’s office quietly made a similar decision to dismiss a lower-profile but still newsworthy case.

In March 2016, Jose Maldonado, then the chief of the Chicago Heights Park District Police Department, was charged with speeding, drunken driving, carrying a gun while intoxicated and other offenses after allegedly committing a traffic violation that began on an expressway ramp, an incident that was reported at the time by WLS-Ch. 7. The Sun-Times reported that Foxx sent a letter to Maldonado’s attorney saying, “we have determined that the appropriate disposition is to dismiss the criminal charges against your client (and) our decision is based solely on a review of the merits of the pending case.”

What? Wait! Why? The Sun-Times reported that Foxx’s press office didn’t respond to a request for an explanation. OK. There’s much to like about prosecutors who seek justice rather than victory by not going forward when they aren’t sure they have proof of guilt beyond a reasonable doubt. We should expect no less.

And there’s also much to like about Foxx’s overall efforts to devote public resources to addressing serious violent crime.

But there’s nothing to like about doing it in darkness. That seems like a basic truth. But my view that the Smollett fallout is only about celebrity and secrecy, and not about race, has had to evolve as reaction to the story has consistently referenced race. Foxx, who is African-American, recently stood shoulder to shoulder at a news conference with those who contend that racism animates her critics, just as an all-white group of police chiefs recently stood shoulder to shoulder with the local Fraternal Order of Police to put forth an expression of no confidence in Foxx.

So it is about race now, like it or not. It’s about the widening of a poisonous divide not only between those who enforce the law and the communities that badly need their protection, but also between those who investigate crime and those who prosecute the offenders.

That’s my answer to those who wonder why we keep covering and commenting on this story despite the alleged crime’s insignificance compared with the carnage on our streets nearly every day. The carnage and this controversy will entwine. And the closer we get to the violent months of summer, the more urgent it becomes for Foxx to bring the light.