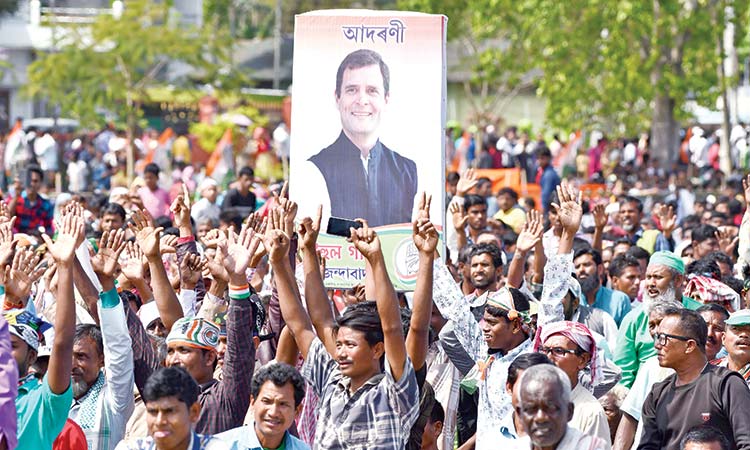 Parts of Kashmir will also vote on Thursday.

India has gone on high security alert ahead of the start of its marathon elections that will continue for nearly 40 days in April and May, with some 900 million people eligible to vote in 543 parliamentary seats.

The biggest, longest and perhaps the most expensive ballot will not only decide the fate of Narendra Modi as prime minister for another term, but also indicate the direction in which the nation is headed when it comes to its long-cherished secular values.

The government’s inability to create enough jobs for new entrants to the workforce and failure to ease farmers’ distress over low product prices has taken the shine off what is still considered the fastest growing economy.

The authorities would do well to see that the entire poll process is violence-free. A bomb blast on Tuesday blamed on Maoist rebels killed five people, including a lawmaker campaigning for Modi, has heightened fears of election bloodshed.

The killing of a local leader of a Hindu nationalist group in Jammu and Kashmir has  reinforced fears of trouble during the voting time.

Parts of Kashmir will also vote on Thursday. Gunmen burst into a Jammu hospital and shot dead the regional leader of the Rashtriya Swayamsevak Sangh, which is closely linked to Modi’s party.

Tensions also simmered in the eastern state of Odisha where two landmines were recovered by patrols, and in nearby Bihar where two roadside bombs were detonated. Kashmir hit the headlines ahead of the election after 40 paramilitaries were killed in a suicide attack in February.

While the BJP is defending a landslide win over the opposition Congress party in 2014, the result is predicted to be very close this time, as some regional parties not aligned with the major two parties are also expected to perform well.

Congress leader Rahul Gandhi Gandhi did attempt to forge a grand alliance with a clutch of powerful regional parties fighting the elections so as to avoid the splintering of votes.

However, the unwillingness of several other Congress officials to give in to the demands of the smaller parties and the vaulting ambition of key regional figures frustrated his efforts.

In 2014, the Bharatiya Janata Party  won with a huge margin  in Uttar Pradesh, India’s most populous state, but a new tie-up there between a popular leader Mayawati, champion of the Dalits, and another regional party, means a repeat performance is unlikely.

Modi has been presenting himself as a defender of national security and even at times questions the patriotism of his rivals, but the Congress insists he represents a threat to every opposition group by pursuing the vision of a Hindu-first India, stoking fear among the minority communities.

Amid the poll heat, India’s Election Commission has banned the release of a biopic about Modi.

The decision is a victory for the opposition parties, which had complained that the flattering portrayal of Modi would give the ruling party an unfair advantage.

On another front, election-related false news and hateful propaganda on digital platforms have unfortunately been at peak levels and it’s disheartening  that so far the officials have not been able to do much to tackle the issue.

The task may certainly be daunting but the authorities should ensure a free and fair ballot at about a million polling stations.