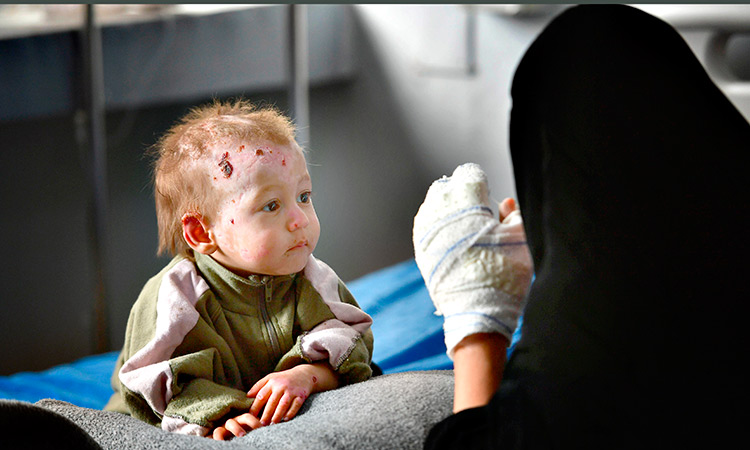 A girl receives treatment at a hospital in Syria’s northeastern Hasakeh province. File/AFP

The Syrian people suffer but not the government these powers claim they are punishing and pressing to come to a political deal dictated by Western external actors. Meanwhile, the rich want for nothing, the middle class and the poor struggle. Many survive only due to money sent by relatives living abroad.

When I last visited Syria a year ago, Damascus, its satellite towns, and Homs had electricity for twenty-four hours a day seven days a week. Aleppo had power for factories during the day and cuts for households; electricity for homes and shops came at night. Now current is rationed. In Damascus it is four hours on and two hours off in every 24 hours. In surrounding areas it is three hours on and three hours off. Elsewhere there are different arrangements. Businesses and households make do with bright but fading lights from batteries which are recharged when and if there is electricity.

A year ago businesses which need electricity to operate used generators to provide power during off hours. Today there is no fuel oil, “mazout,” for generators. Syria’s towns and cities are much quieter and cleaner without the noisy, polluting generators but business and people suffer. Scarce mazout is supplied to hospitals, schools, universities, bakeries and other essential services. My small hotel has not had mazout since December, in spite of the cold, wet winter and spring. Business, particularly, manufacturers, cannot operate properly. Hoarders or smugglers operate a black market and charge high prices for mazout.

Bottles of cooking gas are rationed. Syrians have smart cards allowing them to buy a bottle which must last for a fixed period. My friend Joseph celebrated when he used four cards to get bottles for his house, mother, mother-in-law and sister. An importer of cooking gas told Gulf Today that the US has exerted pressure on Iraqi, Jordanian and Lebanese firms to stop them from providing gas bottles to Syria. Householders cook on electric rings while there is electricity and use gas to warm food and make coffee. The situation can be difficult when wives and husbands both work.

Smart card petrol is rationed to 20 litres a day but those who travel between cities and towns can get an additional 20 or 40 litres on application. There is, of course, expensive black market petrol. Petrol is, however, consumed greedily by traffic jams caused by the influx into the cities of people from devastated villages and towns.

Rationed electricity, the lack of mazout, and cooking gas makes most everything more expensive as does the fall by at least a quarter in the value of the currency.

Essential medicines, which used to be produced in Syria, are in short supply. Pharmaceutical plants in Aleppo have been either destroyed or their equipment looted. For surviving firms raw materials are not available. Spare parts for medical and other machines cannot be obtained.

The main difference between this April and last is caused by the tightening of sanctions. As usual people subjected to sanctions find ways and means to survive but at a painful cost to their physical and mental health.

After the privations of heat and light during winter Syrians are, however, cheered by the appearance in shops and vegetable markets of white truffles gathered among the tufts of green grass and weeds growing in the desert. While driving between Damascus and Homs, using a special petrol ration, my companions and I saw scores of men collecting truffles. The glut has, however, made prices low: one kilogram costs about $1.50. Truffle gatherers earn little for their backbreaking effort. An old friend – well met in by chance at the Kafrsouseh mall in Damascus while I was getting my mobile number reactivated – boasted, “We have truffles but not petrol.”

Now that the suburbs of Damascus have been cleared of armed groups of all types and that the cities of Aleppo, Homs, Hama, Deir al-Zor have returned to Damascus’ control, the government has turned its attention to tax collecting in order to provide salaries for employees and services for civilians. Several businessmen claim the energy of the tax collectors is ruining trade and discouraging Syrian entrepreneurs now living abroad from returning and investing in new enterprises as well as reconstruction.

Reconstruction aid, investment and materials are blocked by the sanctioning powers. Although $7 billion has recently been pledged for Syria, this is confined to humanitarian aid for Syrians living inside and outside the country. UN and other agencies have been barred from engaging in reconstruction. This means Syria cannot rebuild its ravaged cities, towns, villages and infrastructure and provide for its population. Until Syria is rebuilt, its people will remain dependent on foreign humanitarian aid while its government will remain dependent on its main allies, Russia and Iran, which cannot afford to rebuild the country.

UN and other agencies are permitted to invest in small “livelihood” pojects that enable Syrian individuals and families to become self-supporting. Salim Moussa, Head of the Homs Field Office of the World Food Programme, told The Gulf Today that irrigation canals are being repaired so that farmers who have stayed on or reclaimed their land can plant crops. Microfinance is available for non-agricultural projects as well but to recover Syria needs a Marshall Plan like that provided by the US to a devastated Europe after World War II.

The shortsighted Western powers do not mind that Syria’s war and struggle to survive have impacted their neighbouring allies Jordan and Lebanon, countries afflicted with serious economic crises. Iraq was turned into a failed state by the 2003 US invasion and subsequent eight-year occupation. If this happens to Syria, Lebanon and Jordan, deprived of Syria as a trading partner and transit country to the Arab hinterland, could soon follow.