Trade war: Trump is back at the table with China - GulfToday

Trade war: Trump is back at the table with China 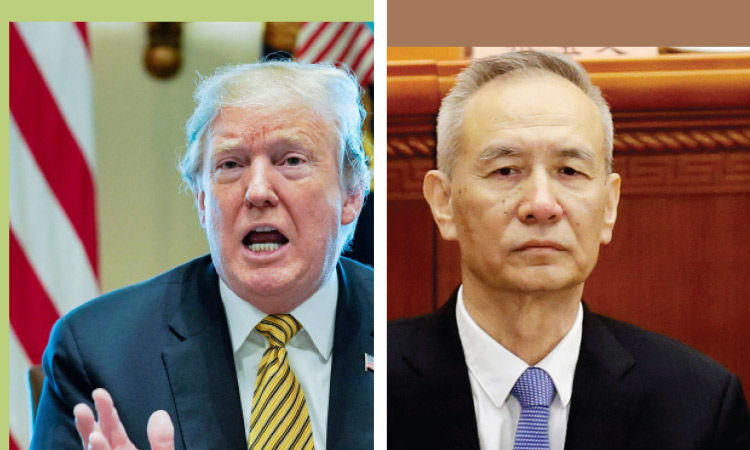 Trade. Tariffs. Talks collapsing before they begin. Politicians, diplomats and negotiators sniping at each other. No, not Brexit (just for a change) but the US-China trade war.


This is not a faraway dispute in lands of which we know little. It is something of great significance to every internationally open economy, such as Britain, which relies heavily on international trade to maintain its standard of living.

The China-US nexus is the key dual economic relationship on Earth today, obviously dwarfing the UK-EU spat. If China and the US had continued with their tit-for-tat imposition of tariff and quota barriers on trade it would have created a downward spiral for global growth that might have run out of control. As in the 1930s, when the great economic powers pursued competitive devaluation and protectionism, the US-China spat ran the severe risk of tilting the world into a protracted depression.

Good news, then: after almost a year of dispute, their trade war is coming to an end. And with that comes a fresh opportunity to “fix” the woeful economic relationship between the world’s two largest economies: the United States and China.

Donald Trump meets the Chinese vice premier Liu He at the White House to put the finishing touches to a new deal between the superpowers. If successful, it should swiftly lead to a summit between Trump and Xi Jinping to sign everything off and enjoy a jolly nice banquet.

The profile of the deal is impressively simple. The Chinese contract to buy lots of American goods by 2025. Beijing is also supposed to allow US corporations more freedom to buy Chinese enterprises, rather than be restricted to non-controlling equity stakes and state-sanctioned joint ventures. The recent controversies surrounding software giant Huawei highlight how sensitive some sectors can be to such foreign interventions.

The deal will get Trump off China’s back and see their growth tick up again with a boost to confidence. It will help Trump by creating US jobs, just as he promised in his 2016 election campaign. There are plenty of criticisms that can be made about the deal – it is effectively distorting market forces – and there are doubts about whether China will deliver too. But for now it is one of the few signs of hope on the global economic scene.

The Trump administration gambled, and at least partially won; it should be given some credit for that. It seems to have been a product of the typical Trump way of “negotiating” – start a fight, throw out some insulting tweets and then magnanimously offer to make peace. This must be the way to get ahead in the Manhattan real estate market. In any case, it is a big, beautiful deal the president has won.

It is too easily forgotten that the financial crash of 2008 and the global recession that followed had its origins in the incomprehensibly large trade deficits the Americans ran with China, and the correspondingly unfeasible quantity of US government debt that had been accumulated by the authorities in Beijing. These global imbalances fuelled the unsustainable lending practices of western banks, particularly into the property sector.

Behind that was a number of disputed factors, but undeniable was the simple reality that the Chinese were able to manufacture anything from smartphones and dog food to “Make America Great Again” baseball caps at considerably less cost than the US. Throw in a bit of currency manipulation – keeping the Chinese yuan down to ensure exports were competitive – and you have China’s impressive growth record.

Now, though, the two sides have peered over the abyss of a potential decade-long economic war of attrition and drawn back from the brink. There is, perhaps, a lesson there for Brexit too.