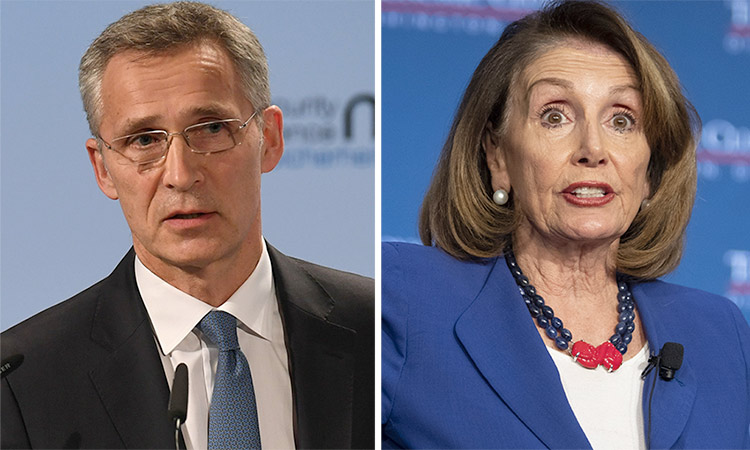 Every child knows if he is attacked by a bully in a schoolyard it helps to have buddies alongside him. All the more so for nation states: Military allies make attacks less likely and alliances of democracies strengthen their hands against despots.

Yet President Donald Trump repeatedly displays his scorn for NATO, the transatlantic military alliance that has kept the peace in Europe since World War II ended. NATO will mark its 70th anniversary in Washington on April 4, but onetime plans to make it a celebratory summit were downgraded to a low-key gathering of foreign ministers for fear Trump would harangue the party.

So, rather than pop corks, the ministers have an unwritten item on their agenda: Not only must they adapt NATO to new challenges from Russia, China, and technology, but they need to figure out how to survive Trump.The good news: There is strong bipartisan support for NATO in Congress. Senate Majority Leader Mitch McConnell is a fervent NATO supporter and has split with Trump on the issue; he and House Speaker Nancy Pelosi have invited NATO head Jens Stoltenberg to address a joint session of Congress on Wednesday.

Rep. Brendan Boyle, who just led a congressional delegation to a meeting on NATO in Croatia, says: “Bipartisan support for institutions like NATO has been critical in deterring Soviet and then Russian aggression.” Counterparts in Europe grilled Boyle on whether that support will last in the Trump era. He thinks it will. Polls show more than 75 per cent of Americans believe the US should maintain its commitment to NATO.

This, despite Trump›s calling the alliance “obsolete” and suggesting last year that the United States quit NATO because it was a drain on our finances. Trump fulminates that allies don›t pay their fair share and are taking advantage.

“When he thinks of Europe, he thinks of trade, of German cars, of allies being deadbeats,” says Jim Townsend, a fellow at the Center for a New Security, who served eight years as deputy assistant secretary of defense for European and NATO policy. “He sees NATO purely in transactional terms.”

However, the issue of members› individual defense budgets – each is supposed to rise to 2 per cent of GDP by 2024 – is relevant. Germany›s failure to boost defense spending undercuts the alliance. It gives Trump further excuse to keep bashing the alliance, although he wrongly claims that the increased funds would reimburse the United States. Yet the big reasons to back NATO have nothing to do with Trump›s monetary gripes. “What we›ve learned since WWII is that we don›t want to be alone in the world, because it is too dangerous,” says former US Ambassador to NATO Nicholas Burns, coauthor of “NATO at 70: An Alliance in Crisis,” a just-released report from Harvard›s Kennedy School.

Burns argues that the power of an alliance is critical when the United States faces new challenges from a resurgent Russia, a rising China, and new technological threats. A strong NATO forces Moscow to think twice before trying to destabilise European member countries as they have done in Ukraine, Georgia, and elsewhere. “The Baltics and Poland still need defense,” says Burns.

A strong NATO strengthens efforts to push back against Kremlin cyber-meddling and political assassinations. It is needed to coordinate a response to the new deployment of Russian missiles on its European territory.

Most important, NATO is key to the battle of ideas that may shape the 21st century. “NATO is also an alliance of democracies,” says Burns, “as the US and European allies push back against the big idea (promoted by) authoritarian powers.”

Slamming NATO gifts Putin and others who argue that democracy is passe. Congress gets it. The public gets it. The issue is whether their support for NATO will be overruled by Trump.