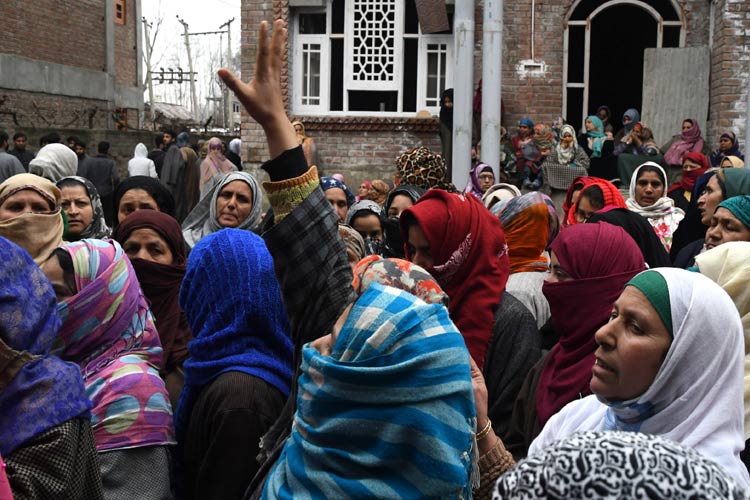 Kashmiri women during a rally.

Along with the rest of India, Jammu and Kashmir goes to the polls during April-May to choose six members of the Lok Sabha, the lower house of Parliament. At present the state is without an elected Assembly. But the Election Commission has not scheduled fresh Assembly elections.

While announcing the poll schedule, Chief Election Commissioner Sunil Arora offered a clumsily worded explanation for not holding Assembly elections in Jammu and Kashmir along with the Lok Sabha poll.

As he put it, the decision was “based on the specific inputs and recommendation from the state government and Union Home Ministry, inputs from the political parties and other stakeholders, constraints of availability of central forces and other logistics, requirement of security forces for security of candidates in wake of incidents of violence in recent past and keeping other challenges in mind.”

The CEC’s explanation runs counter to facts on record. After the Assembly was dissolved and the state placed under President’s rule, both Home Minister Rajnath Singh and Governor Sat Pal Malik repeatedly affirmed the Central and state governments’ readiness to hold Assembly elections at any time of the Election Commission’s choice.

That was, of course, before the Pulwama suicide attack in which more than 40 security personnel were killed. But neither the Home Minister nor the Governor has publicly gone back on those commitments even after that incident.

All parties other than former Chief Minister Mahmooda Mufti’s People’s Democratic Party have favoured immediate Assembly elections.  It was in these circumstances that AG Noorani, a constitutional expert, observed that failure to schedule Assembly elections in Jammu and Kashmir along with the Lok Sabha poll shows up problems in the working of the Election Commission.

The CEC’s response to Noorani’s criticism is highly unsatisfactory. It fails to provide a credible answer to the question why the Commission, which is ready to hold the Lok Sabha poll, is unable to make the additional arrangements needed for conduct of the Assembly elections.

Jammu and Kashmir has six Lok Sabha constituencies — three in Kashmir valley, two in Jammu province and one in Ladakh. Polling in the state is spread over five days. While five constituencies will have one-day polling, in the sixth, Anantnag, polling will be completed in three phases spread over two weeks.

The schedule suggests that the ground situation in Anantnag is far more serious than the government has acknowledged publicly. Even so, the Commission’s decision raises some questions. The 87 Assembly constituencies may have a few hundred candidates. Is it beyond the state’s competence to protect them and to meet the additional requirement of men and material for the Assembly elections?  Must we let our democratic process become a hostage to militant groups?

The main obstacle to the constitutional process in the state appears to be the policy paralysis that has gripped the administration. After the collapse of his early efforts to improve relations with Pakistan, Prime Minister Narendra Modi has failed to develop a coherent approach to bilateral relations and to the Kashmir problem. Instead there have been knee-jerk reactions to developments in or relating to the state.

With the Lok Sabha elections at hand, Modi appears to let conditions in the state fester, reckoning it will pay electoral dividends. Last week the Centre banned Yasin Malik’s Jammu and Kashmir National Liberation Front, saying “it has been at the forefront of separatist activities and violence since 1988.” No recent event was cited to justify the step.

In a break with past practice the Centre decided not to send a minister to represent it at the Pakistan High Commission’s National Day reception since Kashmiri separatist leaders were also invited, although this is not the first time they have figured on the guest list.

The government informed the national media about the boycott. But it did not tell the media about Modi’s message to Prime Minister Imran Khan conveying greetings to the government and people of Pakistan on the occasion. Indians learnt of it from Imran Khan’s tweet.

All things considered, there is reason to suspect that the Election Commission has allowed the political interests of the ruling dispensation to override its constitutional obligation to hold Assembly elections.