Is Ivanka the brain behind her father’s presidency? - GulfToday

Is Ivanka the brain behind her father’s presidency? 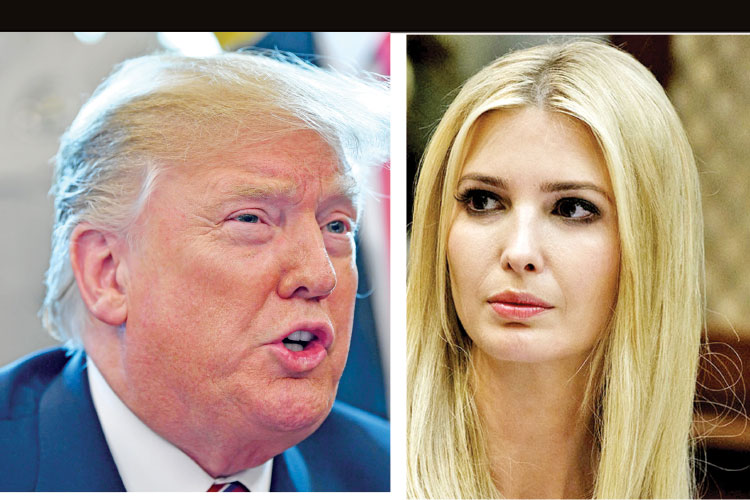 Kushner, Inc. is generating buzz this week for its unflattering, out-of-touch portrayals of presidential son-in-law Jared Kushner and his wife, Ivanka Trump. The book paints the former as more polished, but just as conniving and venal as her father. Indeed, author Vicky Ward portrays Ivanka as a Cersei Lannister-grade schemer.

Ivanka Trump seems to plays dumb a lot; we’ve all given her a pass and assumed she’s merely “complicit” due to sexist stereotypes that say a pretty woman can’t be capable of evil deeds. But what if Ivanka is the true mastermind of the entire Trump presidency? It looks to me like clues connecting her to virtually every aspect of the ongoing Trump-Russia scandal are littered everywhere — from her intimate friendship with rumoured Putin mistress Wendi Deng to her personally curated involvement in the development of Trump Tower Moscow.

Ivanka has had her fingers in every pie. And if she’s been the mere vanity hire who’s deciding on paint chips and how many minutes the massages should last, then it makes her semi-formal unpaid position as princess advisor to her father all the more inappropriate. The choice, to me, is clear: she’s either intimately involved or wholesomely, harmlessly incompetent. And I strongly doubt the latter.

There was a time when I wanted to like Ivanka. I wanted to see her as The Daughter Who Saved Her Family Business. I think we all did. But I have reasons to believe otherwise now.

A friend of the family who worked with the Trumps personally — both President Donald Trump and Ivanka Trump — told me years before that fateful 2015 escalator ride that “Ivanka is the brains of the family and she’s the one who actually runs things — he just shows up to sign stuff.

If it weren’t for her, Trump would be broke.” This individual worked at a Trump-branded property for many years, from the project’s inception, when the Trumps were still actively involved.

I was told that Donald Trump liked to show up, shake hands and play boss, making promises he had no intention of keeping and would later pretend he never uttered.

The other partners ended up kicking them out because the Donald couldn’t be trusted to follow through on his word or contract, and they retained licensing of the Trump name because he behaved so badly.

Ivanka was just getting involved in the family business back then, but my friend noted that she was the only one who seemed to have any actual competence. “Look at him, though. Her mom ran everything for him in the 80’s and when he left her, he was nonstop bankrupt until Ivanka was old enough to work for him,” they said.

If you think about it, that timing does make sense. Trump’s great renaissance from hopelessly toxic asset to oligarch-underwritten reality TV star began about when his daughter started helping to run the show.

Before we get caught up in what Jared Kushner has been perpetrating, we have to stop and remember that Ivanka is the intersection between her father and her husband. She might well benefit from those tired stereotypes which portray her in certain sections of the media as a passive and ignorant Stepford wife.

Indeed, many in Donald’s inner circle might prefer to turn a blind eye to the real-life astute advisor-executive crafting strategies in so many facets of every Trump venture.

To my mind, however, Ivanka has been playing Verbal Kint with ease for years — and we shouldn’t be too surprised if we discover she’s really Kaiser Soze.