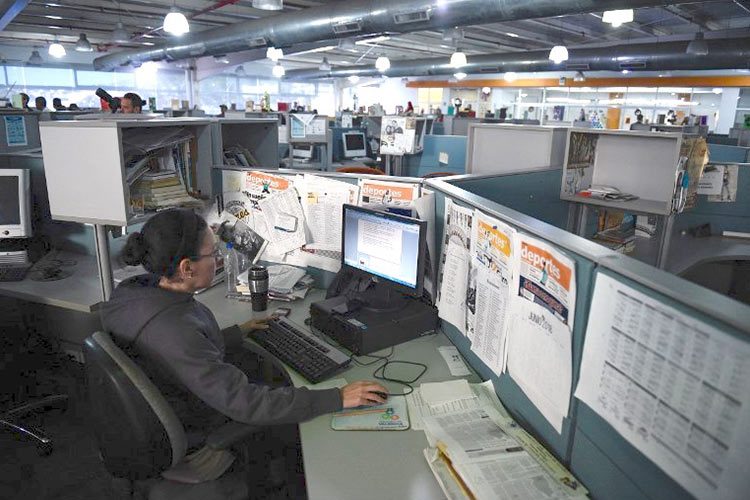 A general view of inside a newsroom.

We can say that there are many tools that will be provided by the Fourth Industrial Revolution (4IR), which will play a large role in shaping the concept of the Artificial Intelligence (AI) journalism which doesn›t rely solely on a «Robot».

Each of these technologies have a great role in pushing AI Journalism. Let’s take a look at some of them.

High-definition Mobile Devices for imaging, transmission and communication with (5G, G6, G7) networks or new networks are 1,000 times faster than current speeds, as well as have direct contact with several rotary satellites, connected to media channels› or to social communication networks directly. This will allow the journalist or media specialist or even News robot who has such technologies to be a Mobile Media Organization (writing, photography, editing and broadcasting) that will take AI Journalism to a high level and promote a big jump in the media industry.

Internet of Things (IOT) platforms will also have a significant impact in the growth of AI journalism. It will work on support and provide continuous and fast communication between various media tools such as «cameras, studios, computers, mobile phones, robots, satellites and others» or technology tools that convey content and news. Each tool includes a radio frequency ID (RFID) that Media specialist or journalist can remotely control in content transmission or to communicate with the target audience.

3D Printing, which opens up new horizons in drawing and photographing people and events more closely to the real, may completely change the montage and video editing programs, as well as the creation of 3D live and imaginary models of some events which are hard for the media to obtain on their own photographic material. This will strongly promote the growth of Artificial Intelligence Journalism.

Open Data Platform (ODP) is one of the foundations of Artificial Intelligence Journalism, allowing a huge amount of open data around the world to all media, journalists, and even the «robot» to get information daily without searching for it. Once you set your information interests›, millions of sites and links will flow to you to get the most detailed information about governments, organizations and individuals.

Big data will also be added to that. Intel estimates that the amount of data generated by humans since the beginning of history until 2003 is 5 Exabyte (1 exabyte = 1 billion gigabytes), but this figure has doubled 500 times in 2012 to 2.7 Zettabytes  (1 zettabyte = 1 trillion gigabytes).

According to Hal Report “From Big Data to Fast Data: Efficient Stream Data Management”, the amount of data generated in 2016 was 16.1 Zettabytes, while forecasts estimate that the world will create 163 Zettabytes in 2025, a ten-fold increase in less than a decade. Interestingly, same studies anticipate that by that time the global volume of data subject to analysis will be»only 3 %”, roughly 5.2 Zettabytes. Not only will this deluge of data raise issues in storing, managing and analysing the 3 %, but it will also challenge the processing paradigms in order to filter out, on the fly, the other 97 %.

Cloud Computing is seen by many as the next wave of information technology for individuals, companies and governments. The abundant supply of information technology capabilities at a low cost offers many enticing opportunities. In addition to reducing operational costs, cloud technologies have become the basis for radical business innovation and new business models and for significant improvements in the effectiveness of anyone using information technology – which, these days, increasingly means most of the world, according to the World Economic Forum report.

In conclusion, there is a strong need for more research and reports to discuss in detail the future of the media industry under the Artificial Intelligence Journalism revolution. The structure of the media industry can’t be constrained to the functions of the robots in professional media work. Robots do some similar work in factories, shops, oil fields and space stations. Artificial Intelligence Journalism is greater and more comprehensive than just a useful «robot» which can do several functions.