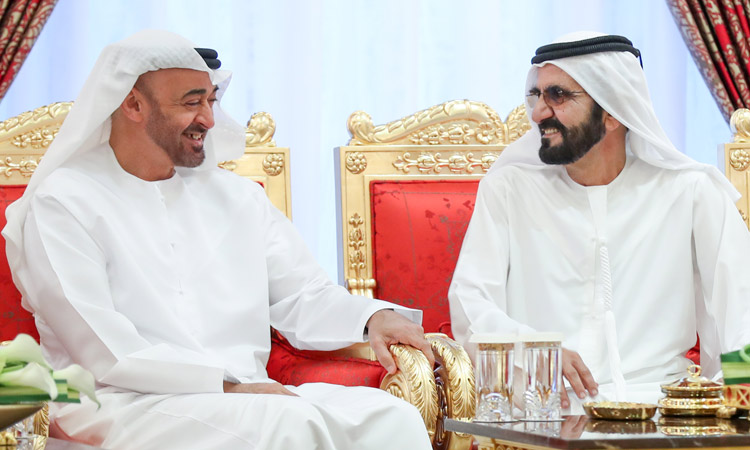 "Our homeland will always remain a giver and a peacemaker, and we will support local, national, and international initiatives aimed at improving government performance, delivering the future, fostering innovation, empowering local communities, combating poverty, advancing clean energy, and promoting tolerance,” His Highness Sheikh Mohammed added in his statement to ‘Nation Shield’, the UAE Armed Forces' magazine on the occasion of the 51st UAE National Day.

The full text of the statement runs as follows:

In our 51st year, we suffered the loss of our President, the late Sheikh Khalifa Bin Zayed Al Nahyan, but our people had a strong sense of faith in Allah's will, proved the strength of their feelings, and supported the leadership of my brother, President His Highness Sheikh Mohamed Bin Zayed Al Nahyan.

During the funeral of the late Sheikh Khalifa, our people commemorated his qualities, wisdom and valuable contributions to the process of national development. In pledging allegiance to President His Highness Sheikh Mohamed, our people have affirmed their confidence in his leadership, being hopeful about the present and future.

We will progress under the leadership of President His Highness Sheikh Mohamed during the implementation of his plans, strategies, policies and projects in all areas of sustainable development, to achieve new successes in the first year of the upcoming 50 years.

During this year, our efforts to address the COVID-19 pandemic were crowned by a major success the entire world recognised. While the world was still struggling to recover from the repercussions of the pandemic, our country was among the most efficient in overcoming its effects, reflected in many international development and competitiveness indexes.

During the pandemic, we successfully hosted Expo 2020 Dubai, which concluded in March. Its activities achieved outstanding successes that topped all expectations.

In terms of successes, the government’s performance was outstanding and it continued to adopt the best standards in the fields of planning, implementation, follow-up and project implementation. Moreover, the government achieved significant progress in its digital transformation programme, as well as in boosting the efficiency of its infrastructure and digital assets. Under this framework, I thank all government employees for efficiently implementing relevant plans and projects.

In continuation of the approach we adopted, we issued the Federal Budget for 2023-2026 early, focusing on ambitious plans and projects that look forward to new and promising future horizons while adding to existing achievements and improving standards of living and quality of life. In this budget, the development and social benefits sector accounts for the largest share at 39.3 percent in 2023.

We continue to empower Emirati citizens by implementing sustainable plans and projects. Therefore, we established a council to ensure balanced national development and advance all regions and villages in terms of development and tourism. We have also adopted a new housing loan policy within a financing programme totalling AED11.5 billion, which will benefit 12,000 families over the next 5 years.

To encourage national cadres to engage in the private sector, we have established a system to increase Emiratisation by two percent for skilled jobs available in private sector companies with more than 50 employees.

Education remains a national priority in the vision of President His Highness Sheikh Mohamed. Under the framework, a specialist government action team, an efficient educational system, the Emirati community and parents will raise a generation that can lead us to new horizons.

We are confidently progressing to the overall advancement of our entire education system, and we are monitoring the positive outcomes of various developmental processes. I am proud of the performance of our sons and daughters who graduated in all areas of work, and our national cadres specialising in space sciences, atomic energy, and civil and military industries. Our citizens are now managing the Barakah Nuclear Power Plant, actively engaging in artificial intelligence, leading our space programmes and industries, and have dispatched the Hope Probe to Mars.

You are well aware of the major economic challenges faced by the world during the COVID-19 pandemic and the Russia-Ukraine War, and we have addressed these challenges with policies and procedures that eased their negative effects.

We have also adopted the National Food Security Strategy, which includes an agricultural policy and the transition to advanced agricultural methods. Furthermore, we have issued a new law on cooperatives that stipulates the adoption of new methods of cooperative governance.

Moreover, we have issued the UAE Tourism Strategy 2031, which aims to promote a unified national identity and support Emirati tourism, as part of the Projects of the 50. Our country today is one of the ten most attractive destinations in the world, and our objective is to increase our competitiveness and raise the contribution of tourism to our GDP to AED450 billion by 2031.

All of these coincided with the adoption of relevant legislation, in line with the best international practices.

Another key challenge facing the world is global warming or climate change, which negatively affects economic development and rainfall levels.

Despite the international awareness about the risks of climate change, as well as the holding of relevant conferences and the signing of related agreements since 1995, the real interest in adopting relevant policies did not begin until recently, due to the rising catastrophes caused by global warming.

The UAE has prioritised climate action at an early stage, and we have implemented legislation, action plans and policies to address this issue. We established the Supreme Committee for Environment in 1975, and we now have the Ministry of Climate Change and Environment.

Under the framework of the National Climate Change Plan and the Emirates Energy Strategy 2050, we have accomplished tangible achievements in reaching climate neutrality and increasing clean energy production by 2050.

Our country contributes to the international efforts to limit the rise in global temperatures, through our advanced model of dealing with the climate issue, our achievements in the field of clean energy, the creation of an ideal working environment for the International Renewable Energy Agency (IRENA), and the international projects of Masdar City, as well as our strategic partnership with the US to invest US$100 billion in clean energy projects in the two countries and around the world by 2035.

Next year, the UAE will host the 28th session of the Conference of the Parties (COP28) of the United Nations Framework Convention on Climate Change (UNFCCC), and we will ensure the success of this international conference while looking forward to supporting global climate action efforts.

Since the beginning of this century, the world has seen many changes on various fronts. While it seems to be more advanced because of new inventions and more connected due to new communication tools, divisions are increasing and humanitarian crises are happening as a result of wars, pandemics, poverty and climate change. The world order that was established after World War II is beginning to dismantle and a new world order is taking shape.

We are closely monitoring these changes, tracking their developments and addressing their impacts to protect our security, stability and development while preserving our principles and interacting with our partners in the Gulf Cooperation Council (GCC) and the Arab region, as well as the rest of the world. We believe that for humanity to overcome these major challenges, we must promote joint action and cooperation.

Our nation will always be a country of giving and a messenger of peace, and we will support regional and international initiatives in the areas of government performance, foreseeing the future, encouraging innovation, empowering communities, reducing poverty reduction, supporting clean energy, and spreading the values of tolerance.

Tomorrow, we begin a new federal year, and we will embrace it with confidence and optimism, as well as a determination to accomplish new achievements and successes.

In the era of changes, transformations and artificial intelligence, we need to protect our values, heritage and traditions and guarantee a balance between them and new developments.

I have great confidence in the UAE’s citizens, who will write bright new chapters in the story of our nation.

My sons and daughters, I congratulate you on this day, and I congratulate President His Highness Sheikh Mohamed bin Zayed Al Nahyan and my brothers, Their Highnesses Supreme Council Members and Rulers of the Emirates."