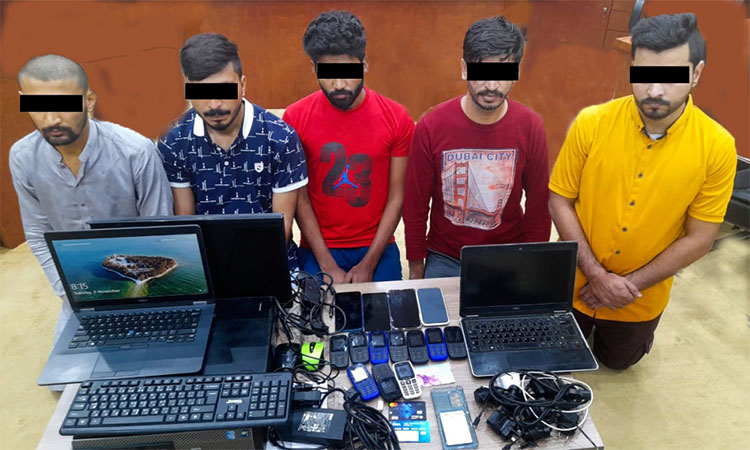 The suspects with their tools of operation are in police custody.

The security teams of the Criminal Investigation Department (CID) at the Sharjah Police arrested a gang of five Asians for their involvement in phone scams.

The suspects reportedly contacted people randomly, claiming that they were calling from banks or government institutions to entrap their victims and seize the money from their bank accounts.

They have been referred to the Public Prosecution, the police said.

“The gang used a residential apartment to carry out their fraudulent operations, as they were monitored and followed up by the Organised Crime Section at the CID, after several reports were received regarding that,” Colonel Omar Ahmed Balzod, Director of the CID, said.

After legal measures had been taken, the apartment was raided and the perpetrators, mobile phones, computers, and SIM cards that were used by the gang members to fraudulently trap victims were seized, he added.

He explained that the fraudsters were making random calls to the victims, during which they were claiming they were calling from their bank, to update their personal data. They were also warning them that their accounts would be blocked or frozen if they did not respond to them. That trick prompted some gullible people to respond to their request and provide them with the OTPs they received on their phones. Then, the gangsters were able to withdraw the cash from their bank accounts.

He called on the public not to respond to these deceptive communications, and not to disclose or share their bank account information and personal data with anyone.

He also advised in the event that anyone wished to update his/her banking information, he/she should walk to the bank branch and update the data through the customer service staff.

As part of its efforts to spread awareness among all community members and in particular students of the UAE, the Community Police Department of the Sharjah Police General Directorate organised a lecture on cybercrimes to raise awareness of students and parents of Fatima Al Zahra Primary and Secondary School For Girls.