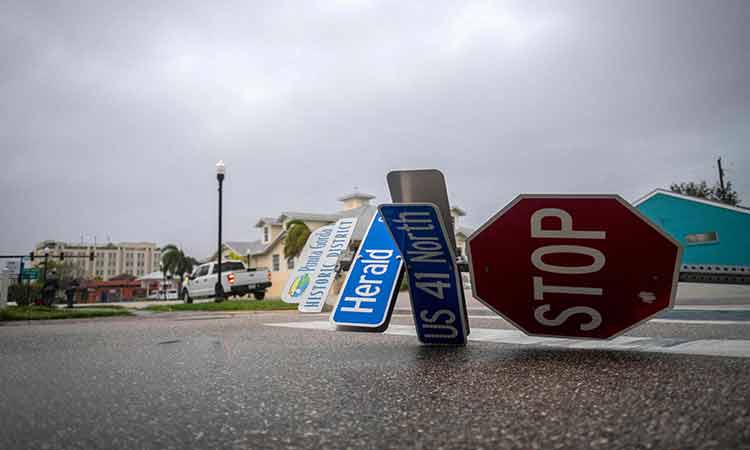 A blown down street sign is seen as the eye of Hurricane Ian passes by in Punta Gorda, Florida, on Wednesday. AFP

Hurricane Ian left a path of destruction in southwest Florida, trapping people in flooded homes, damaging the roof of a hospital intensive care unit and knocking out power to 2 million people before aiming for the Atlantic Coast.

In Port Charlotte, along Florida's Gulf Coast, the storm surge flooded a lower-level emergency room in a hospital even as fierce winds ripped away part of the roof from its intensive care unit, according to a doctor who works there.

Water gushed down onto the ICU, forcing staff to evacuate the hospital’s sickest patients — some of whom were on ventilators — to other floors, said Dr Birgit Bodine of HCA Florida Fawcett Hospital. Staff members used towels and plastic bins to try to mop up the sodden mess.

The medium-sized hospital spans four floors, but patients were forced into just two because of the damage. Bodine planned to spend the night there in case people injured from the storm arrive needing help.

"As long as our patients do OK and nobody ends up dying or having a bad outcome, that’s what matters," Bodine said. 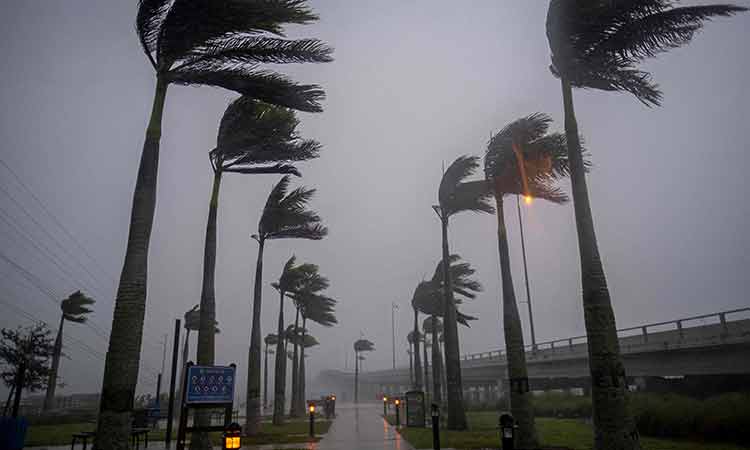 Brittany Hailer, a journalist in Pittsburgh, contacted rescuers about her mother in North Fort Myers, whose home was swamped by 5 feet (1.5 meters) of water. 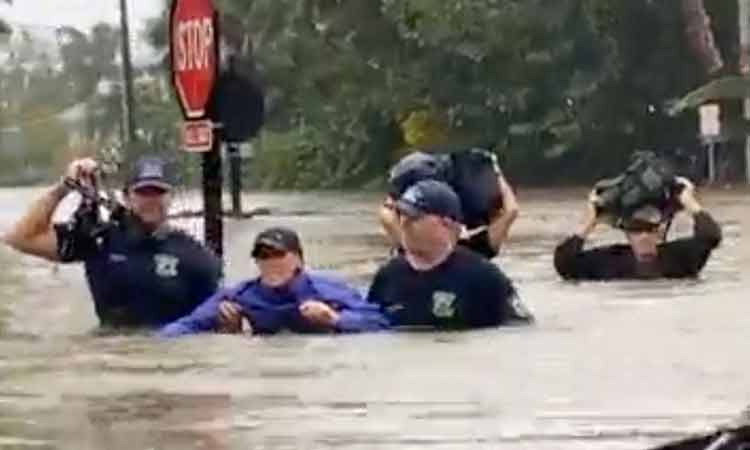 This still from a video shows firefighters rescue a person amidst flooding in Naples, Florida, US, on Wednesday. Reuters

"We don’t know when the water’s going to go down. We don’t know how they’re going to leave, their cars are totaled,” Hailer said. "Her only way out is on a boat.”

Hurricane Ian turned streets into rivers and blew down trees as it slammed into southwest Florida on Wednesday with 150 mph (241 kph) winds, pushing a wall of storm surge. Ian’s strength at landfall was Category 4 and tied it for the fifth-strongest hurricane, when measured by wind speed, to ever strike the US

Ian dropped in strength by late Wednesday to Category 1 with 90 mph (144 kph) winds as it moved overland. Still, storm surges as high as 6 feet (2 meters) were expected on the opposite side of the state, in northeast Florida, on Thursday.

No deaths were reported in the United States from Ian by late Wednesday. But a boat carrying Cuban migrants sank Wednesday in stormy weather east of Key West. 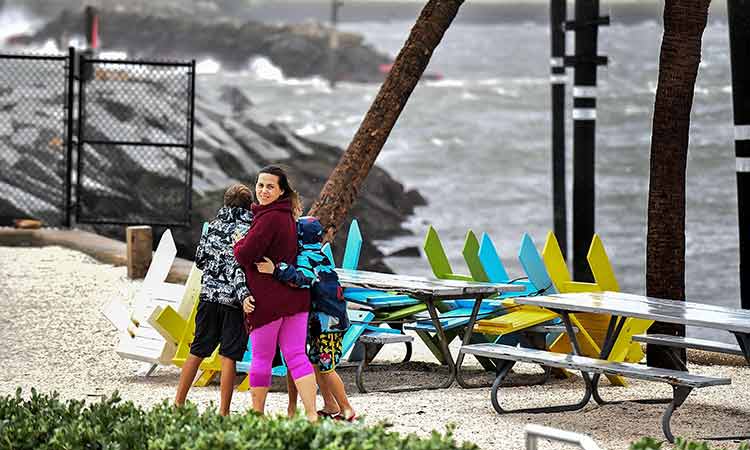 Residents walk in the middle of rain and heavy wind at the St. Pete pier as the Hurricane Ian hits the west coast. AFP

The US Coast Guard initiated a search and rescue mission for 23 people and managed to find three survivors about two miles (three kilometers) south of the Florida Keys, officials said. Four other Cubans swam to Stock Island, just east of Key West, the US Border Patrol said. Air crews continued to search for possibly 20 remaining migrants.

The storm previously tore into Cuba, killing two people and bringing down the country’s electrical grid.

The hurricane’s eye made landfall near Cayo Costa, a barrier island just west of heavily populated Fort Myers. As it approached, water drained from Tampa Bay.

More than 2 million Florida homes and businesses were left without electricity, according to the PowerOutage.us site. Nearly every home and business in three counties was without power. 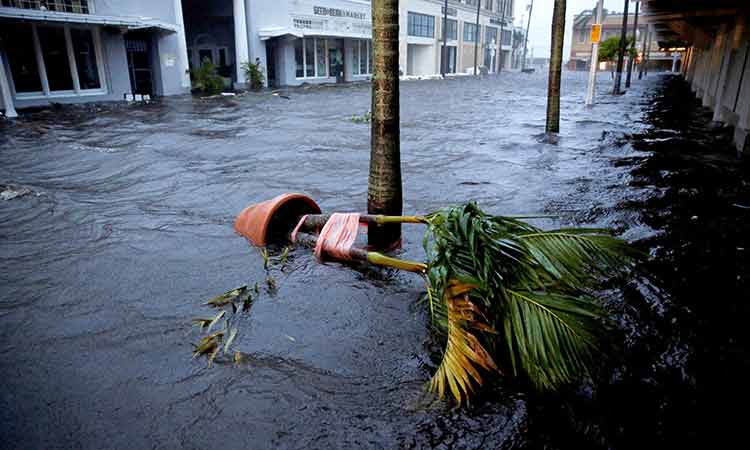 A flooded street is seen in downtown as Hurricane Ian makes landfall in Florida on Wednesday. Reuters

"I am enacting this curfew as a means of protecting the people and property of Charlotte County," Prummell said.

The Weather Underground predicted the storm would pass near Daytona Beach and go into the Atlantic before veering back ashore in South Carolina on Friday.

The governors of South Carolina, North Carolina, Georgia and Virginia all preemptively declared states of emergency. Forecasters predicted Ian will turn toward those states as a tropical storm, likely dumping more flooding rains into the weekend. 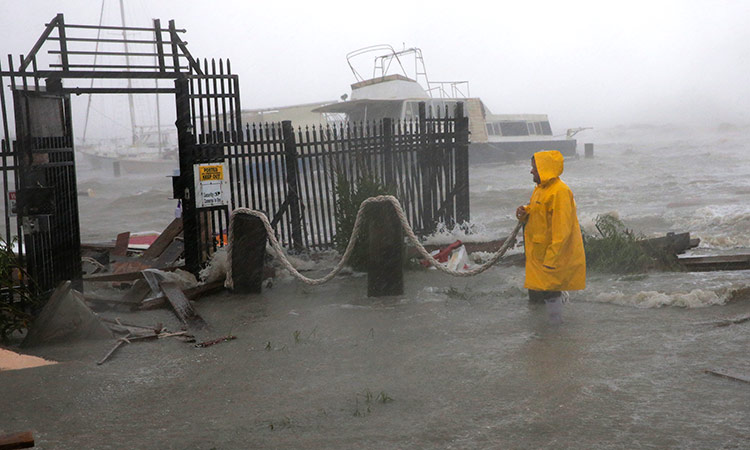 The NHC forecast that Hanna would lose steam as it moved inland across Texas and northeastern Mexico overnight into Sunday. But the storm could dump upward of 18 inches of rain in the area through on Monday.