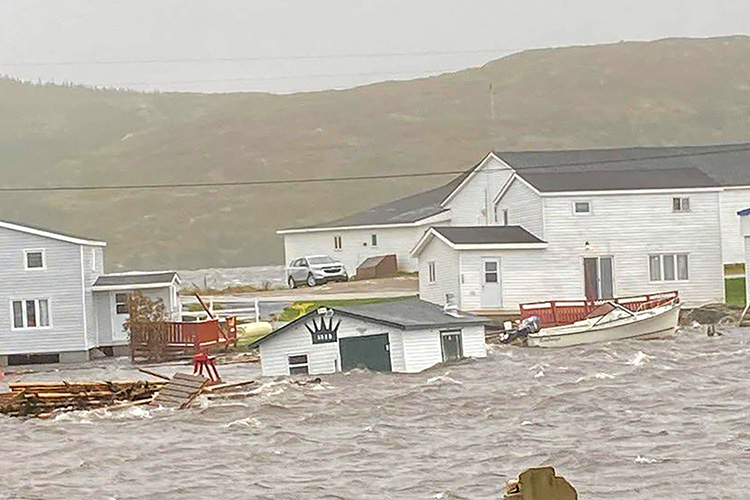 Picture shows damage caused by post-tropical storm Fiona on the Burnt Islands in the Newfoundland and Labrador Province of Canada. AFP

Fiona transformed from a hurricane into a post-tropical storm late on Friday, but it still had hurricane-strength winds and brought drenching rain and huge waves. There was no confirmation of fatalities or injuries.

Canada has issued severe weather warnings for most of its east coast.

"It will surely be a historic and extremely dangerous event for Eastern Canada," Bob Robishaw, a Canadian Hurricane Center meteorologist told reporters before the hurricane landed.

In the last bulletin published by the Canadian Hurricane Center, this time it was indicated conditions would improve in western Nova Scotia and eastern New Brunswick Saturday.

Nova Scotia officials issued an emergency alert on phones saying a power outage was possible and people should stay indoors with supplies for at least 72 hours.

Canadian Prime Minister Justin Trudeau called the storm  "bad," noting "it could have significant impacts across the region."

In Halifax, propane cylinders for camping stoves ran out of stores as people hoarded large amounts.

"Hopefully the hurricane will slow down when it hits cold water, but it doesn't look like that," Dave Boyce, who works at the Northern Yacht Club in North Sydney, Nova Scotia, told Canadian television.

The Bermuda archipelago previously urged residents to stay indoors when strong winds blew, but no Deaths or significant damage were reported when Hurricane Fiona passed about 100 miles (161 km) west of the island.