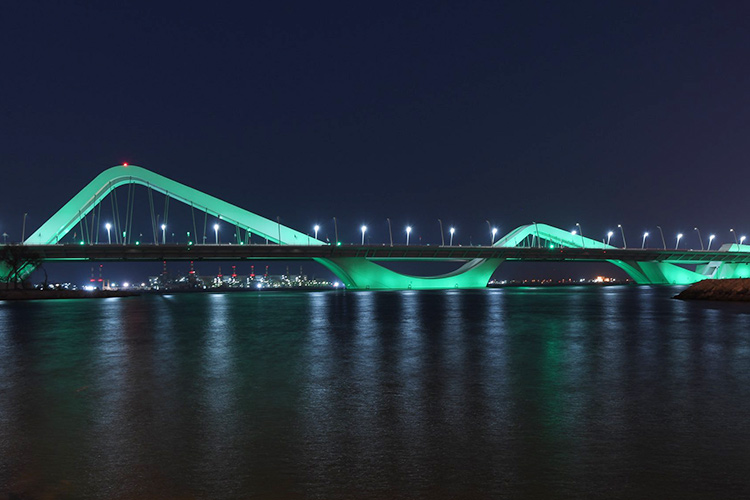 The Sheikh Zayed Bridge lights up in Saudi colours in Abu Dhabi.

Sheikh Mohamed Bin Zayed said, “Congratulations to the Custodian of the Two Holy Mosques King Salman, my brother Crown Prince Mohammed Bin Salman, and the Saudi people on the occasion of Saudi National Day. May God bless the Kingdom of Saudi Arabia with continued progress and prosperity.”

Sheikh Mohammed tweeted: "On the Saudi National Day, I congratulate the Kingdom and King Salman Bin Abdulaziz and his crown prince. I pray to Allah to perpetuate goodness for them. The Kingdom and the Saudi people have feelings of love in our hearts. They are our family and our brothers. We are proud of our cohesion at present and in the future. We will be together forever, InshaAllah”.

The United Arab Emirates will celebrate Saudi Arabia’s 92nd National Day on 23rd September with large-scale official and popular celebrations, under the theme, "Together Forever KSA-UAE," underscoring the deep-rooted relations between the two countries.

The UAE’s major landmarks and many official and private entities have started decorating their headquarters with Saudi flags, and shopping malls have announced special events and activities on the occasion.

The close ties between the UAE and Saudi Arabia are a distinguished model, and their mutual history has many examples of overall cooperation, including in the areas of politics, diplomacy, the economy and culture.

In 2016, the two countries established the Saudi-Emirati Coordination Council, which aims to establish a joint vision to strengthen and maintain their mutual ties and consolidate their integrated economic systems.

The UAE and Saudi Arabia share the same vision and stance on various topics and regional and Arab issues of mutual concern thanks to their shared principles that support regional and international security and peace.

Subsequently, the leaderships of the two countries, President His Highness Sheikh Mohamed bin Zayed Al Nahyan and King Salman bin Abdulaziz Al Saud, Custodian of the Two Holy Mosques and King of Saudi Arabia, are continuing to enhance their bilateral ties and upgrading them to the highest levels.

Their cultural and social relations embody the geographical and social cohesion between their peoples based on a mutual cultural heritage.

Their close cultural relations are highlighted by the signing of many joint agreements and programmes, as well as the level of cultural cooperation between major institutions and individuals in both countries.

Moreover, the economic and commercial ties between the UAE and Saudi Arabia represent a distinguished and rich model of cooperation in building a better future.