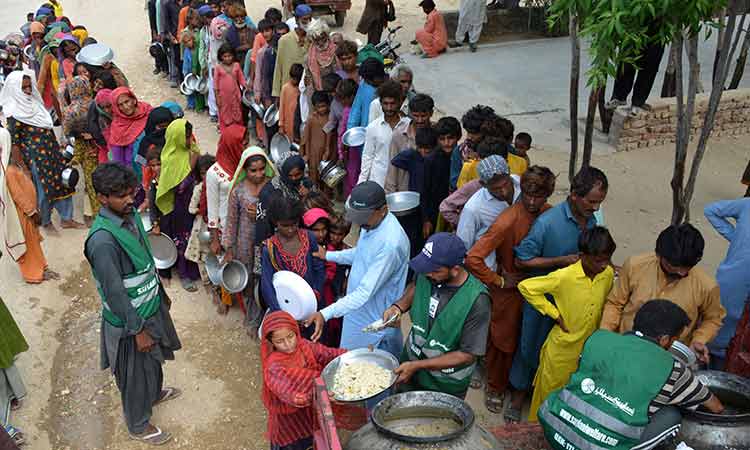 Displaced flood-affected people stand in a queue to receive food at a makeshift camp in flood-hit Sehwan, Sindh. AFP

Pakistan scrambled to deliver aid to those most in need on Tuesday as the death toll from record-breaking floods in this impoverished Islamic nation rose further, with no respite in sight from the unprecedented monsoon rains.

The rains started early this year — in mid-June — and swept away entire villages, bridges and roads, leaving hundreds of thousands homeless. At one point, a third of the country's territory was inundated with water.

Authorities said the overall death toll reached 1,481 on Tuesday, with 54 more people dying in rain-related floods in the past 24 hours, with the majority of those deaths in the hard-hit province of Sindh. Experts have said that climate change has been blamed in large part for the deluge, the worst in recent memory.

Sherry Rehman, Pakistan's minister for climate change, warned that the rains, which had abated late last month only to restart this week, are predicted to continue lashing much of the country in the coming weeks. 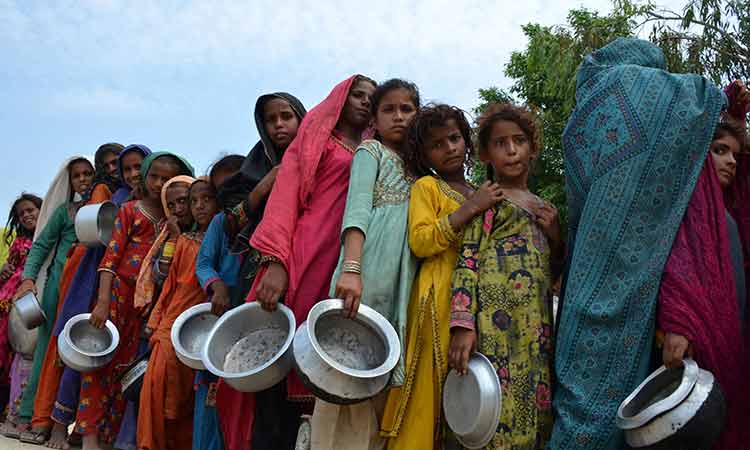 Displaced flood-affected people stand in a queue to receive food in Sehwan, Sindh, on Tuesday. AFP

So far, rescuers have evacuated 179,281 people from flood-hit areas.

It will take up to six months to drain water in flood-hit areas, officials say. Waterborne diseases have already sickened thousands of people in flood-stricken areas - and now there are fears of mosquito-borne dengue fever. Mosquitos have spread, due to stagnant waters following the flooding. 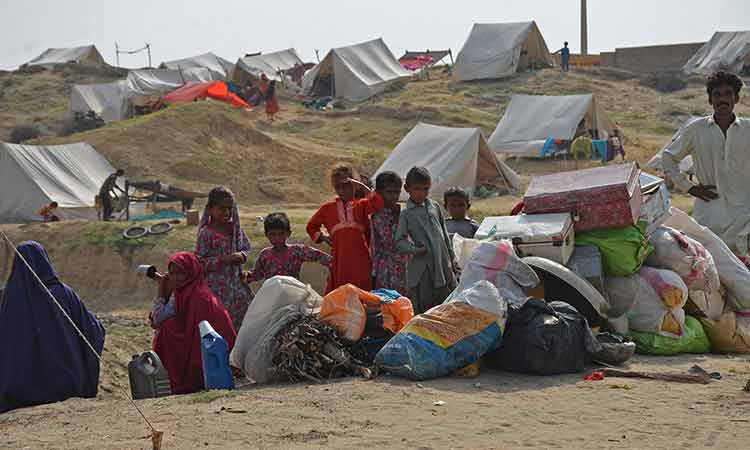 Displaced flood-affected people gather beside their belongings at a makeshift camp in flood-hit Sehwan, Sindh. AFP

"With 584,246 people in camps throughout the country, (the) health crisis could wreak havoc," Rehman said in a statement.

She added that so far, the southern port city of Karachi has registered an outbreak of dengue fever. Karachi is also the capital of Sindh province, one of the regions worst affected by the floods.

The floods have also destroyed crops, including 70% of the onion harvest, along with rice and corn, Rehman said. Much of the country’s agriculture belt is underwater and Pakistan is in talks with several nations to import wheat. Iran has already dispatched fresh vegetables to Pakistan.

In Sindh, officials said more downpours could delay the return of about 600,000 people from camps to their villages, towns and other urban areas. Strong winds the previous day blew away several relief camps in remote areas in Sindh. 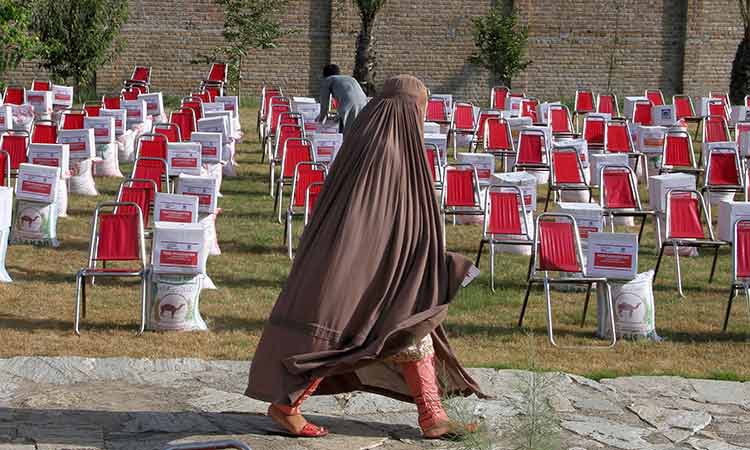 A woman from a flood-affected area arrives to receive food and other items in Shabqadar, Peshawar. AP

Prime Minister Shahbaz Sharif's government has started distributing money to those who lost homes in the flooding to help them restart their lives.

State media also quoted Sharif as telling his Cabinet on Tuesday that despite the fact that Pakistan emits less than 1% of heat-trapping carbon dioxide, it faces widespread damages from climate-induced floods, disproportionately more than other nations.

The floods have damaged 1.7 million homes, according to the National Disaster Management Agency. Thousands of pregnant women are living in tents and makeshift homes.

Initially, Pakistan estimated that the floods caused $10 billion in damages, but authorities now say the damages are far greater. The devastation has forced the United Nations to urge the international community to send more help. 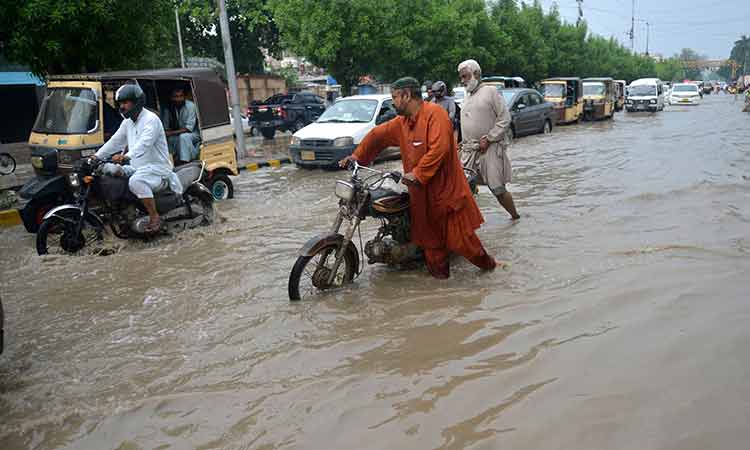 Commuters make their way through a flooded street after heavy rains in Karachi on Tuesday.  AFP

So far, UN agencies and various countries, including the United States, have sent about 90 planeloads of aid. Last week, UN Secretary-General Antonio Guterres traveled to flood-hit areas in southern and southwestern Pakistan to see first-hand the extent of the disaster.

"I appeal for massive support from the international community as Pakistan responds to this climate catastrophe,” Guterres tweeted from Pakistan. Earlier, he had called on the world to stop "sleepwalking” through the dangerous environmental crisis.

The aid will be in the form of direct food support to individuals and families affected by the massive floods that hit Pakistan, killing over 1,136 people, displacing millions, destroying more than 3,450 kilometres of vital roads and isolating entire villages. 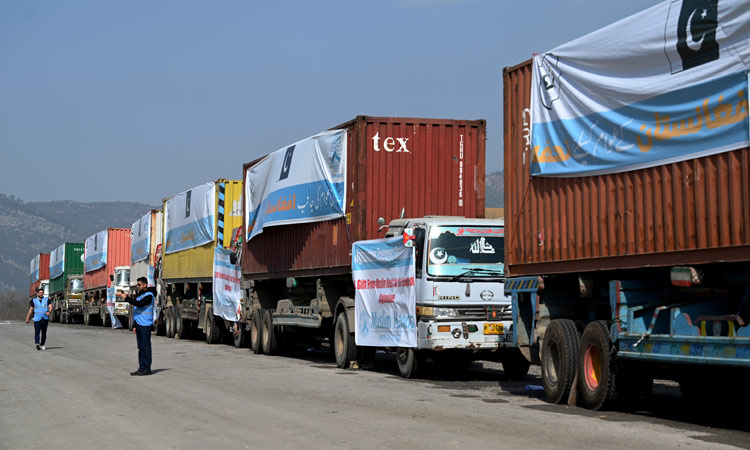 "Pakistan as a neighbouring country has been at the forefront of efforts for provision of humanitarian assistance for the Afghan people," the Ministry said in a statement.

The aid includes medical and food supplies, and shelter building materials, in the first phase of the aid programme implemented by ERC.