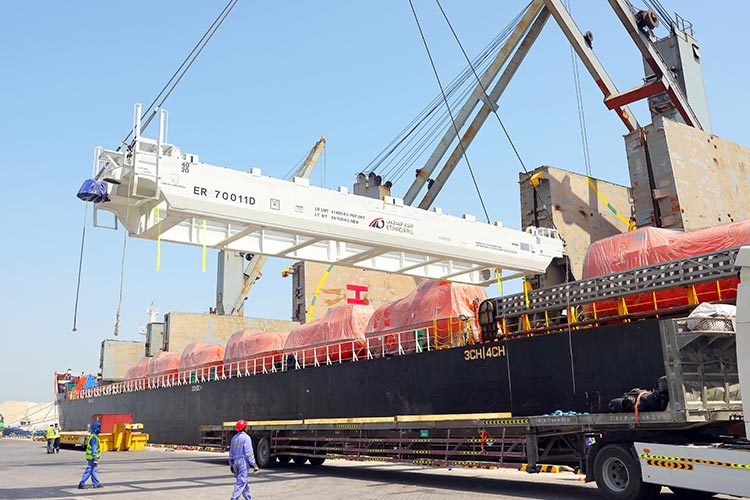 A crane unloads the locomotives and wagons.

The locomotives and wagons, which reached the UAE via Zayed and Al Musaffah Ports, will operate across the whole network upon its completion.

The achievement was announced during an event, which was organised by Etihad Rail at Al Mirfa city in the Al Dhafrah region in Abu Dhabi, to unveil the new fleet of locomotives and wagons.

The event was attended by Shadi Malak, Chief Executive Officer at Etihad Rail, alongside Marty Haycraft, President and CEO at Progress Rail, and Henry Pang, Executive Director, MENA at CRRC, in addition to a number of senior officials from all sides.

The achievement comes in line with Etihad Rail’s efforts to achieve the objectives of the UAE Railways Programme, the largest land transport system of its kind in the UAE, which was launched as part of the Projects of the 50, the largest set of national strategic projects that seek to set up a new phase of development across UAE for the next fifty years.

The UAE Railways Programme aims to set a new roadmap for transporting goods and passengers via train across the country, which will contribute to developing a sustainable land transport system that connects the cities of the UAE via railways. 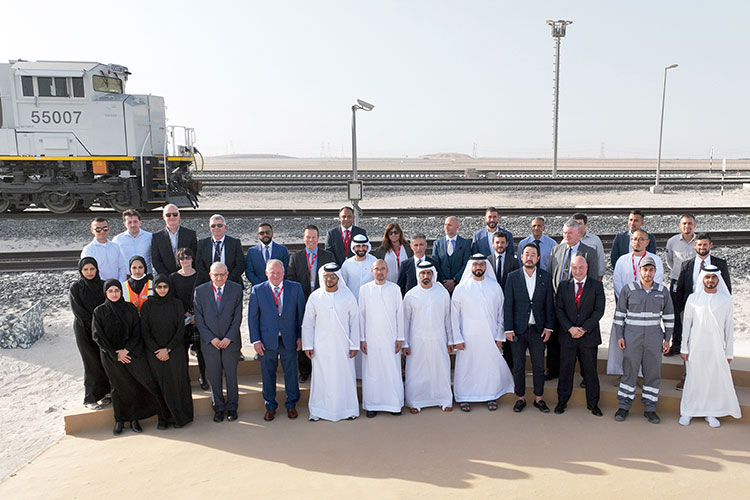 Officials of Etihad Rail and its partners pose for photographs during the unveiling of the new fleet of locomotives and wagons. WAM

The first batches have arrived in the UAE through Zayed and Al Musaffah Ports, which comes as part of Etihad Rail's commitment to expanding its fleet of trains to serve the entire network.

The Company will increase its fleet of heavy freight locomotives to 45 heavy transport locomotives, which is equivalent to 6 times of its current fleet.

Progress Rail, a Caterpillar company of America and one of the world's largest manufacturers of diesel and electric locomotives, will handle the manufacturing and supply of the new EMD SD70 electro-motive diesel locomotives.

The company has increased the size of its wagons, with the new fleet aiming to house more than 1,000 multi-purpose wagons, 3 times of its current fleet.

China's CRRC Group, one of the world's leading providers of sustainable development solutions of the railway industry, will handle handling the manufacturing and supply the new fleet of wagons.

Mohammed Al Marzouqi, Executive Director of Rail Relations Sector at Etihad Rail, said, "The arrival of the new fleet of locomotives and wagons to the UAE on schedule reflects the level of the achievements that the Etihad Rail project is realising in the development of the UAE National Railway Network."

"Upon completion and becoming fully operational, the network will contribute to revitalising and bolstering economic growth in the UAE, particularly during the next 50 years, by providing reliable and safe freight services with high efficiency.

"The network will also contribute to the region’s economic growth upon its connection with the Gulf Cooperation Council (GCC) network, which will consolidate the UAE’s position as a regional and global centre for shipping and logistics services. This achievement comes as part of the company’s preparations to operate the network according to the highest global standards in the future." 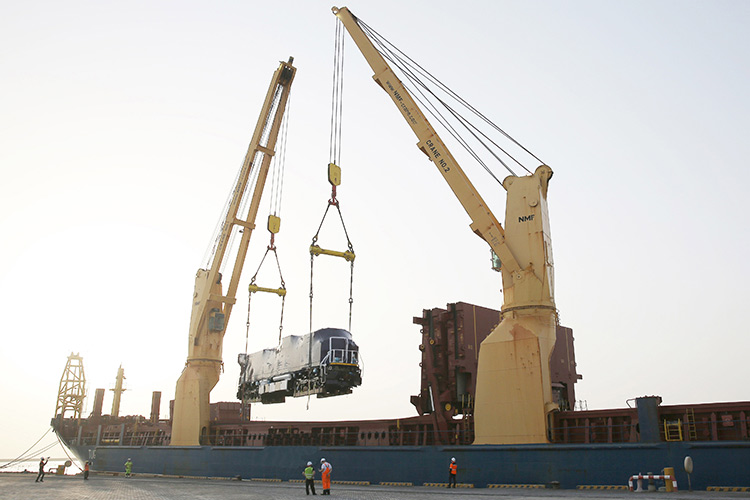 "We made sure that the company’s new fleet is among the most modern in the region and the world, providing the highest safety criteria in terms of design, ensuring the best specifications for sustainability and environmental protection, and integrating the latest technologies for train operation and monitoring. We also ensured that the fleet suits the local geography and climate in the UAE and the region and meets current and future needs of Etihad Rail’s clients, including industrial companies, shipping companies, building materials suppliers, quarriers, and more," Al Marzouqi added.

For his part, Marty Haycraft, President and CEO at Progress Rail, said, "Our diesel-electric EMD SD70 locomotives meet the highest global standards. Etihad Rail's new fleet is a great example of what our customers have come to expect from our advanced locomotives, which are designed to perform in extreme conditions."

Ben Quak, General Manager of CRRC UAE, said, "CRRC is excited to be a partner in Stage Two of the UAE National Rail Network, contributing to the growth of Etihad Rail, the UAE, and the region by supporting the development of the rail industry. We are pleased to witness the successful delivery of the multi-function wagons, which will contribute to reducing carbon emissions and provide safe, sustainable, and efficient services."

Etihad Rail’s new fleet was designed specifically to withstand the geographic, climate conditions, and the high temperatures and humidity levels in the GCC region, ensuring the highest levels of performance, efficiency, and sustainability.

The fleet is set to elevate the transport and logistical services system in the UAE, solidifying the country’s position in the logistics sector on a regional and international level. It will increase the capacity of the UAE National Rail Network to more than 60 million tonnes of goods per year. Etihad Rail’s new fleet will also contribute towards reducing carbon dioxide emissions by 70 per cent-80 per cent. 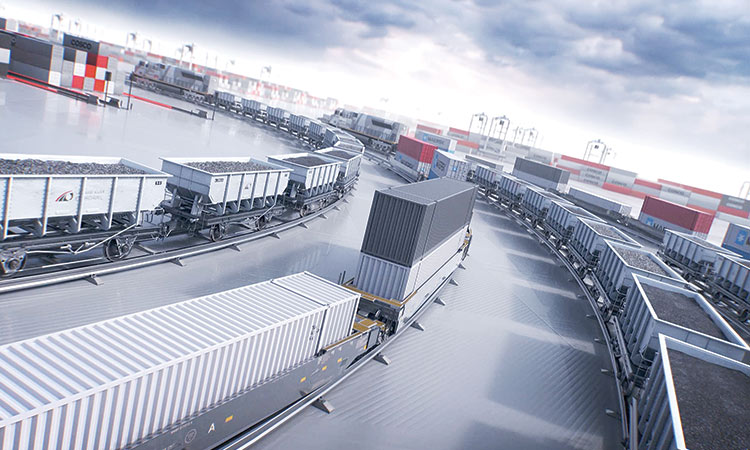 Etihad Rail’s annual transport capacity to reach up to 59mt

Etihad Rail, the developer and operator of the UAE’s national railway, is tripling its fleet by announcing the award of a contract for the manufacture, supply and commissioning of 842 new wagons bringing its total fleet to more than 1,000 units to serve the whole network. 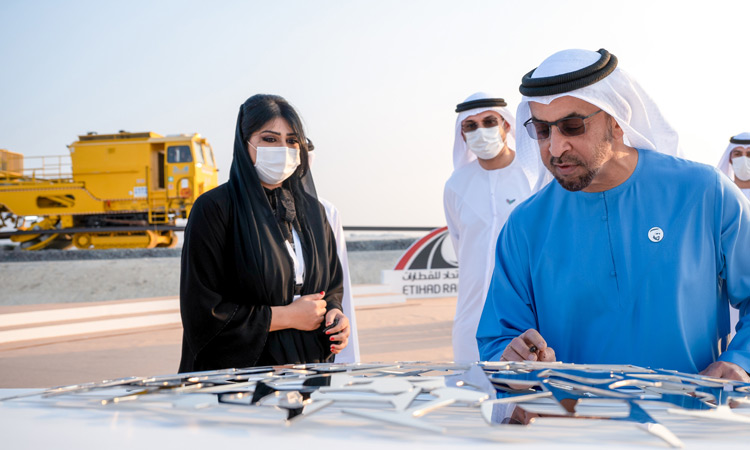 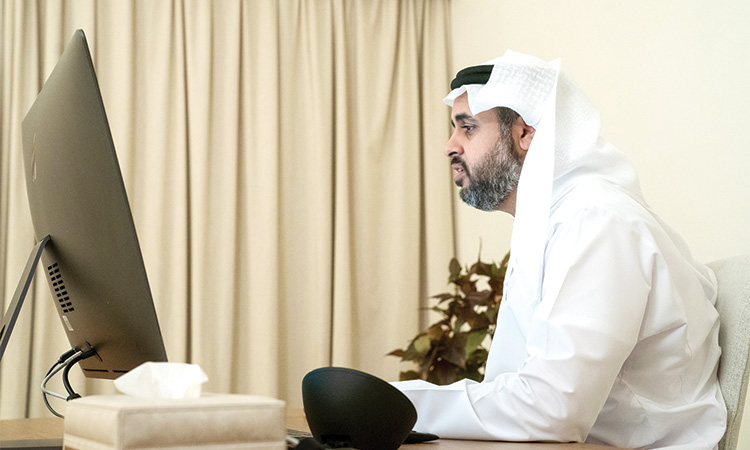 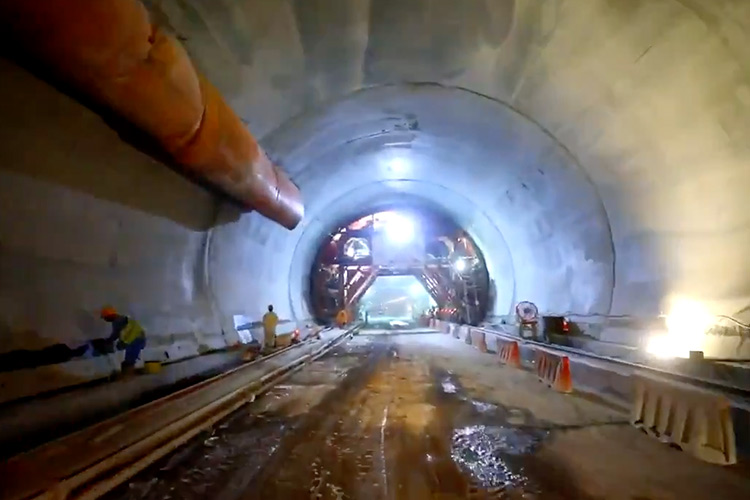 VIDEO: Etihad Rail completes excavation of the longest railway tunnel in the Gulf