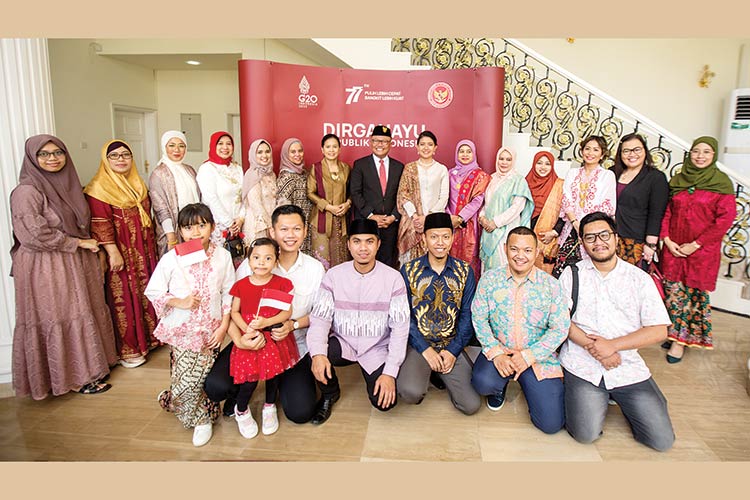 In Bur Dubai where the Consulate General of the Republic of Indonesia is located, Consul General Candra Negara not only led in the traditional hoisting of the red-and-white national flag at 6 a.m. but commended as well three for community service.

The three who were distinguished before 70 fellow Indonesians, by way of one portion each of the “Tumpeng,” were Imam Abdurrahman from Ajman; volunteer worker Joko Slamet who assists the consular mission in providing protection and welfare services to their distressed compatriots in Dubai, Sharjah, Ajman, Umm Al Quwain, Ras Al Khaimah, and Fujairah; and Nova Tompodung, the choir coach of the Gita Merdeka Choir, composed of girls and boys from ages six to 17 who not only perform before their community but also provide Emiratis and other expatriates a glimpse of time-honoured Indonesian songs, an example of which was during the March 10 to 28, 2022 19th edition of the “Sharjah Heritage Days Festival.”

Referring to the UAE Ministry of Foreign Affairs and International Cooperation data, Negara said that of the 79,000 Indonesians across the seven emirates, between 60,000 and 70,000 work and/or study in Dubai and the Northern Emirates.

Originally of Javanese and Balinese cuisines, “Tumpeng” is the cone-shaped rice surrounded by savoury vegetables, seafood, meat and poultry. It connotes humility, legacy, long life, and prosperity as well as peace, order, and harmony between and among nature and man. Above all, it signifies all the glory only God deserves. It is always the centerpiece of any Indonesian celebration.

Negara said the community service rendered by Abdurrahman, Slamet and Tompodung is an embodiment of the virtues of respect, tolerance, compassion, solidarity, selflessness and unity each and every Indonesian has been instilled with since their youth. The simple yet symbolical commendation is an encouragement.

In explaining how these virtues became the Indonesian way of life, he pointed out the demographics of the world’s largest archipelago of 17,500 islands: “We are a nation of 200 ethnicities and of more than 500 languages. Like here at the consulate general, we are made up of 12 ethnicities and we speak our own languages with Bahasa Indonesia as our national language. While I come from West Java. Another is from East Java. (Our native tongue, though we come from Java, are different).”

“Oh, we have six. Islam, Christianity which is divided between the Roman Catholics and the Protestants, Hinduism, Buddhism, and Confucianism. While 90 per cent in Indonesia are (Muslims), they are also a minority,” Negara replied, when asked about religious diversity.

According to the consul general 95 per cent of the Balinese are Hindus while Christianity, whether Roman Catholicism or Protestantism, is strongly observed in North Sulawesi at 80 per cent and North Sumatra at 60 per cent.

He recollected his younger days, saying that embedded in the educational system is the curriculum that respects religious freedom in such a way that students are granted two hours each week for their study and more importantly, their understanding of their respective religions.

“My message to our fellow Indonesians in Dubai and the Northern Emirates is that (much as) we can never (claim) that life will always be smooth-sailing; problems and challenges of all kinds (abound for that is what life is all about). We cope when we remind ourselves every day what we have been taught ever since: respect, tolerance and understanding. It is better to be friends than to be enemies. There will be no harmony with enemies.”

He continued: “In our culture, (we can also do not do away with our neighbours). Neighbours become our families (especially when we are overseas because we aim for solidarity and unity. I encourage my fellow Indonesians to continually be respectful, tolerant and understanding of one another and of others. That is the only we can cope with what is happening around the world.”