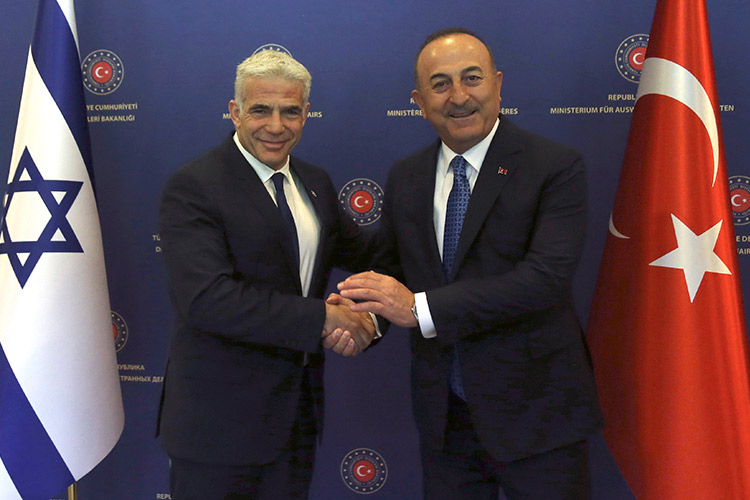 Israel and Turkey announced the resumption of full diplomatic ties on Wednesday, following years of strained relations between the Mediterranean nations.

Israeli Prime Minister Yair Lapid hailed the diplomatic breakthrough as an "important asset for regional stability and very important economic news for the citizens of Israel."

Lapid's office said the diplomatic development will see ambassadors and consuls general posted to the two countries once more.

The announcement follows months of bilateral efforts to mend ties, with reciprocal visits by top officials.

But he cautioned that closer ties with Israel should not be interpreted as Ankara "giving up on the Palestinian cause."

Cavusoglu in May became the first Turkish foreign minister to visit Israel in 15 years, during a trip which also saw him meet the Palestinian leadership in the occupied West Bank.

Reconciliation publicly got underway after Herzog took office in July 2021.

The Israeli president on Wednesday said the full renewal of ties "will encourage greater economic relations, mutual tourism, and friendship between the Israeli and Turkish peoples."

Despite the diplomatic differences in recent years, trade had continued and Turkey has remained a popular destination for Israeli tourists.

Israel however warned its citizens to return home in June, citing an Iranian assassination plot against its nationals in Istanbul.

Lapid then thanked Ankara for its cooperation on the issue and Israelis swiftly resumed their Turkish holidays.

Turkey has meanwhile been keen to stress that its normalisation with Israel could yield benefits for the Palestinians.

"As we have always said, we will continue to defend the rights of Palestinians," Cavusoglu said on Wednesday.

As well as its relations with the Palestinian leadership based in the West Bank, Turkey has also maintained ties with Hamas group that rules Gaza.

Bilateral relations began to fray in 2008, following an Israeli military operation in Gaza.

Relations then froze after the deaths of 10 civilians following an Israeli raid on the Turkish Mavi Marmara ship, part of a flotilla trying to breach a blockade by carrying aid into Gaza in 2010.