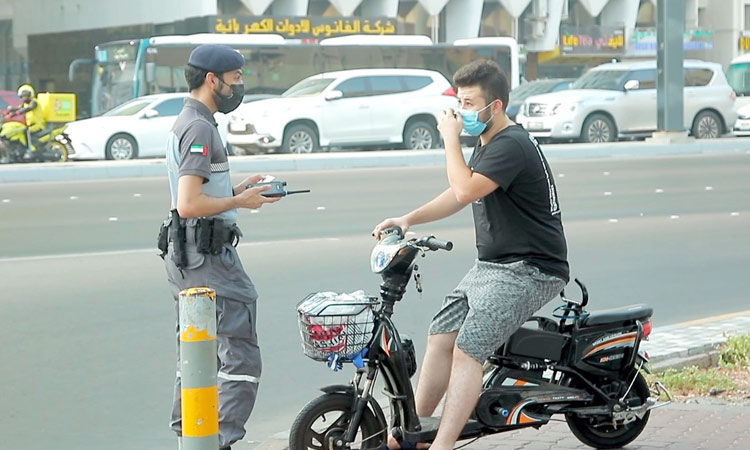 The Directorate of Traffic and Patrols in the Central Operations Sector, in cooperation with the Integrated Transport Center and strategic partners, completed its awareness campaign, which lasted for more than two months in Abu Dhabi, Al Ain, Al Dhafra and the outer regions, and focused on educating bike users of all kinds with the necessary requirements to enhance their safety.

Brigadier General Mohammed Dhahi Al Himiri, Director of the Traffic and Patrols Directorate, stressed the importance of adhering to the necessary instructions and guidelines for traffic safety on the roads to ensure safety and security for all, praising the cooperation between Abu Dhabi Police and partners to enhance levels of public safety and maintain security and stability gains.

He pointed out the importance of adhering to the requirements for the use of bicycles and electric scooters.

He stated that those permitted to be used in Abu Dhabi are of two types, namely bicycles and manual and electric scooters, while the prohibited are electric bicycles with a seat.

He stated that the regulation for the use of bicycles and electric bicycles in the emirate specified the requirements of bicycles that can be used as two-wheeled or more, not equipped with an automatic engine, and driven by the rider, while the electric scooter is a vehicle with two wheels or more, equipped with an engine.

It is electric and driven by the power produced by the electric motor or by the force of its occupant’s thrust. It is driven in a standing manner and does not have a seat.

He urged the need to reduce the speed of cycling in crowded areas and to ride in the permitted lanes according to the directional signs and common paths for pedestrians, bicycles, and electric scooters, internal and secondary roads, and adherence to the requirements of security and safety procedures.

Abu Dhabi Police had published, on its social media platforms, the most important 7 steps to enhance the safety of electric bike users, which are wearing a protective helmet and a reflective jacket, using the lanes designated for bicycles while driving in the same direction, adhering to the speed limit of 20 km / hour and avoiding carrying any passenger.

With the bike user, avoid carrying any heavy weights so as not to lose balance, do not use dual headphones or the phone as they distract focus, and be careful to respect traffic signs and rules.