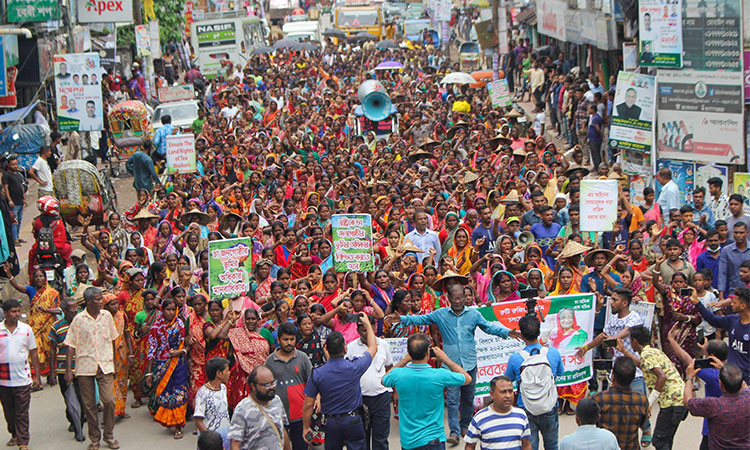 Nearly 150,000 workers at more than 200 Bangladeshi tea plantations went on strike Saturday to demand a 150 per cent rise to their dollar-a-day wages, which researchers say are among the lowest in the world.

Most tea workers in the overwhelmingly Muslim country are low-caste Hindus, the descendants of labourers brought to the plantations by colonial-era British planters.

The minimum wage for a tea plantation worker in the country is 120 taka a day — about $1.25 at official rates, but only just over a dollar on the free market.

"A wage of one day can't buy a litre of edible oil. How can we then even think about our nutrition, medication, or children's education?" she said.

Unions are demanding an increase to 300 taka a day, with inflation rising and the currency depreciating, and said that workers in the country's 232 tea gardens began a full-scale strike on Saturday, after four days of two-hour stoppages.

"No tea worker will pluck tea leaves or work in the leaf processing plants as long as the authority doesn't pay heed to our demands," he said.

Plantation owners have offered an increase of 14 taka a day, after an 18 taka rise last year and M. Shah Alom, chairman of the Bangladesh Tea Association, said operators were "going through difficult times with profit declining in recent times."

"The cost of production is increasing. Our expenses have increased as the price of gas, fertiliser and diesel have gone up," he said.

Researchers say tea workers — who live in some of the country's most remote areas — have been systematically exploited by the industry for decades.

"Tea workers are like modern-day slaves," said Philip Gain, director of the Society for Environment and Human Development, a research group, who has written books on tea workers.

"The plantation owners have hijacked the minimum wage authorities and kept the wages some of the lowest in the world."