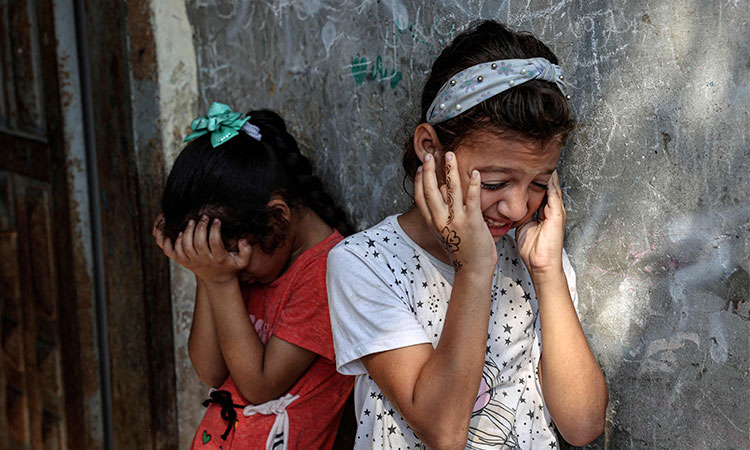 Friends react during the funeral of Palestinian child Lian Al Shaer, after she succumbed to her injuries sustained in last week's Israeli air strikes, in Khan Younis on Thursday. AFP

The UN rights chief voiced alarm on Thursday at the number of Palestinian children killed and wounded this month and demanded those responsible be brought to account.

"Inflicting hurt on any child during the course of conflict is deeply disturbing," Michelle Bachelet, the United Nations High Commissioner for Human Rights, said in a statement.

"The killing and maiming of so many children this year is unconscionable." The Israeli air and artillery strikes targeted positions of Islamic Jihad group.

Her office said that 19 Palestinian children had been killed in the Palestinian territories in the recent unrest, taking the total number this year to 37.

Seventeen children were killed during the Gaza hostilities from Aug.5 to 7, while two more were killed on Tuesday in Israeli law enforcement operations in the West Bank.

The UN Human Rights Office OHCHR said that among the 48 Palestinians killed in last week's Gaza conflict, there were at least 22 civilians. They included the 17 children and four women.

"In a number of incidents, children were the majority of casualties," Bachelet's office said.

Bachelet called for investigations into all incidents where any person was killed or injured. "An almost total lack of accountability persists in the occupied Palestinian territory," she said.