Taliban torn over reforms one year after seizing power - GulfToday 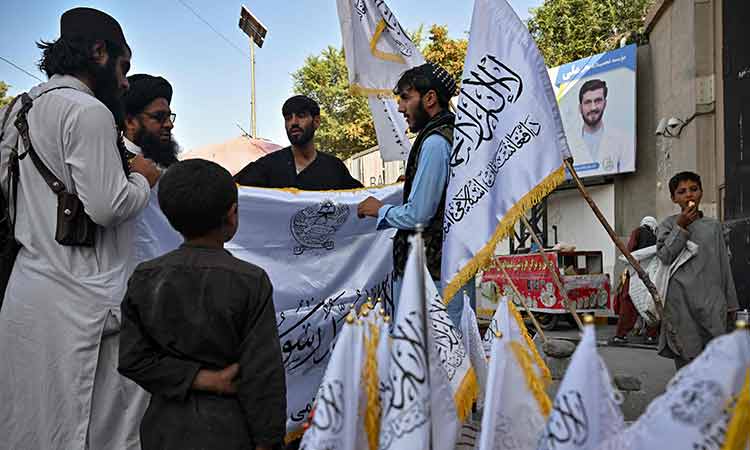 Men buy Taliban flags along a street in Kabul, Afghanistan, on Tuesday. AFP

One year on from the Taliban's return to power in Afghanistan, some cracks are opening within their ranks over the crucial question of just how much reform their leaders can tolerate.

Infamous during their first reign for their crackdowns on rights and freedoms, the group vowed to rule differently this time.

On a superficial level at least, they appear to have changed in some respects.

Officials in Kabul have embraced technology, while cricket matches are cheered in full stadiums.

Televisions were banned under the Taliban government's first incarnation, while Afghans now have access to the internet and social media. 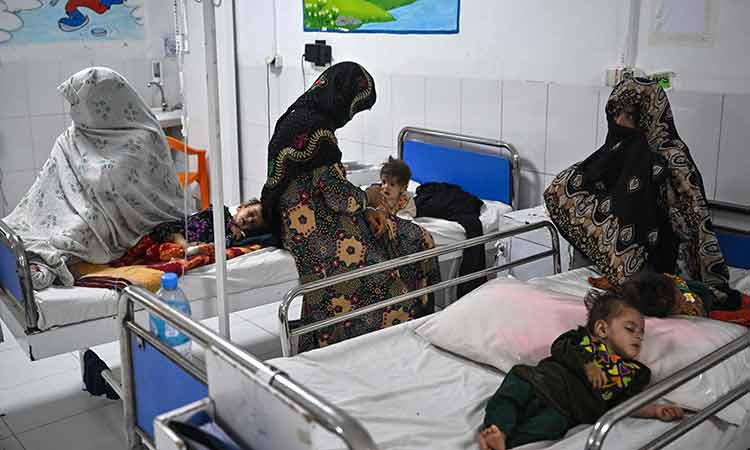 Guardians sit next to children in the malnutrition ward at the Boost Hospital in Lashkar Gah, Helmand. AFP

Girls are allowed to attend primary school and women journalists are interviewing government officials — unthinkable during the Taliban's first stint in power in the 1990s.

The group's hardline core, composed of battle-hardened veteran fighters, is against any significant ideological change that could be viewed as a sign of capitulation to their enemies in the West.

"You have one (Taliban) camp, which is pushing ahead with what they're seeing as reforms, and another camp that seems to think even these meagre reforms are too much," said Ibraheem Bahiss, an Afghanistan analyst with International Crisis Group.

The United States and its allies — which had bankrolled Afghanistan for 20 years — have locked the country out of the global banking system and billions in frozen assets abroad, as they hold out for reforms from the Taliban.

Without significant progress, it is the Afghan people who suffer as the country reels under a massive economic crisis that has seen some families choose between selling their organs or their infant daughters.

On whether the Taliban are even capable of reform, analysts are wary that recent policy changes amount to little more than "tokenism". 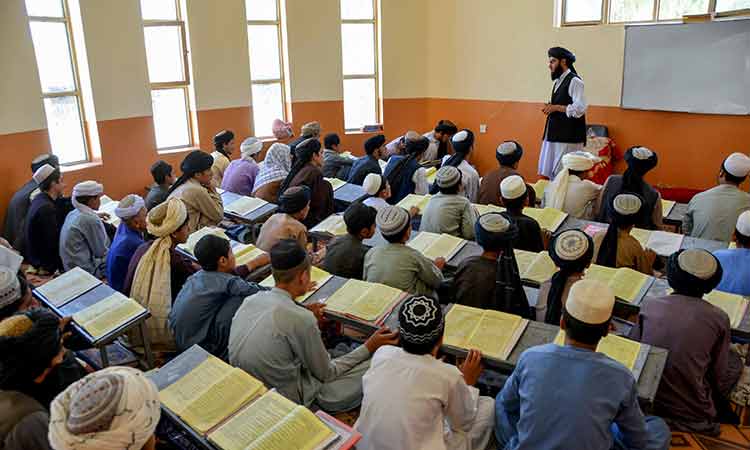 This photo shows Afghans studying in a madrassa in Kandahar. AFP

"There are some cases where we could point to an evolution in policy, but let's be very clear... We're still looking at an organisation that has refused to move beyond very retrograde, dogmatic views," said Michael Kugelman, an Afghanistan specialist with the Washington-based Wilson Center think tank.

Most secondary schools for girls remain closed. Many women have been forced out of government work, while many fear venturing out and being chastised by the Taliban.

Simple joys such as music, shisha and card games are strictly controlled in the most conservative areas, while protests have been crushed and journalists regularly threatened or detained.

Demands from the West for an inclusive government were ignored, and the assassination of Al-Qaeda's leader in Kabul last week underlined the Taliban's ongoing ties with jihadist groups.

It is from the Taliban's power base of southern Kandahar that the secretive supreme leader Hibatullah Akhundzada gathers his powerful inner circle of veteran fighters and religious clerics to impose a harsh interpretation of sharia.

And for them, ideological concerns outweigh any political or economic drivers to effect change.

"The needs of the Afghans remain the same as 20 years ago," Mohammad Omar Khitabi, a member of a council of clerics who advise Akhundzada in Kandahar, told AFP. 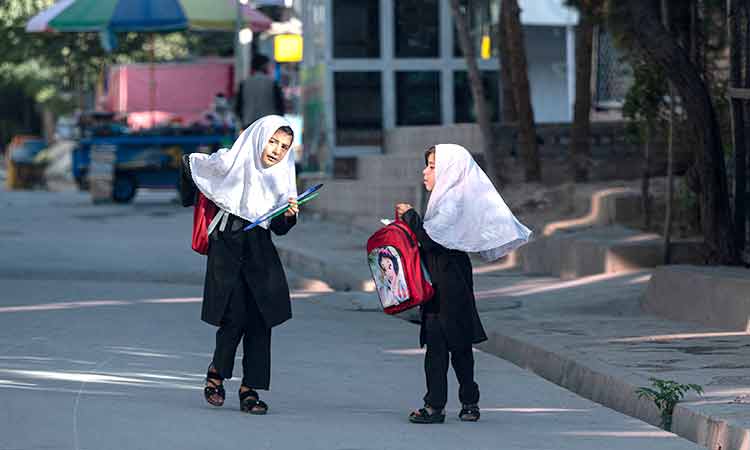 Afghan primary schoolgirls walk to their school along a street in Kabul. AFP

His thoughts are echoed by Kandahar's Vice and Virtue Director Abdul Rahman Tayabi, another close aide of the supreme leader.

"Our people do not have too many demands, like people in other countries might have," he told AFP.

Afghan families were left stunned in March when Akhundzada overturned the education ministry's decision to reopen secondary schools for girls.

Some analysts believe he felt uneasy over what could be seen by hardliners as an act of surrender to the West on girls' rights.

Hopes of restoring international money flows were shattered -- to the dismay of many Taliban officials in Kabul, some of whom spoke out against the decision.

Relations with Western diplomats -- who meet regularly with Taliban ministers but have no access to Akhundzada -- suffered a major setback.

A slew of directives that harked back to the first reign of the Taliban quickly followed.

"The decisions that (Akhundzada) has made so far are all based on the opinions of religious scholars," said Abdul Hadi Hammad, the head of a madrassa and member of the supreme leader's advisory council.

Akhundzada has stressed the need for unity in the movement as he carefully seeks to balance several factions -- including competing groups that claim the credit for the 2021 victory over US-led forces.

While advisers to Akhundzada claim the Taliban can survive without foreign income, unlocking billions of dollars in frozen assets abroad would be a crucial lifeline.

Within the movement, no one dares openly challenge Akhundzada's power, but discontent is quietly growing among the lower ranks. 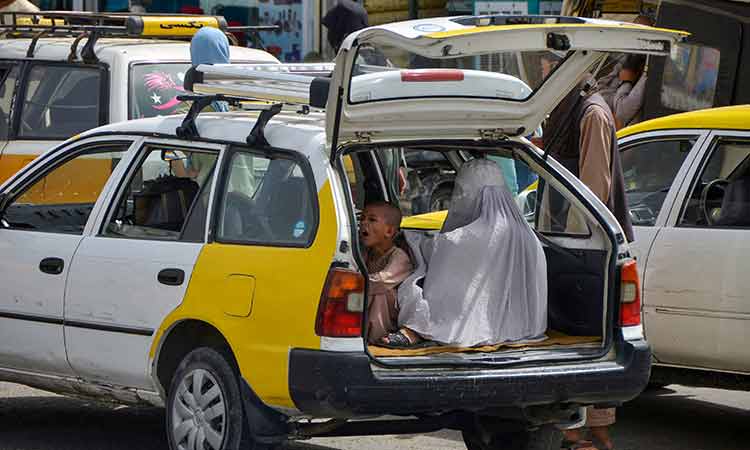 A woman and a child wait in the back of a taxi to commute in Kandahar. AFP

"Taliban guards are getting their salaries late, and their salaries are low too. They are unhappy," said one mid-level Taliban official based in northwestern Pakistan, who asked not to be named.

Many have returned to their villages or travelled to Pakistan to take up different work, another Taliban member added.

Attempts by the movement to shore up revenue through lucrative coal mining have sparked infighting in the north, exacerbated by ethnic divisions and religious sectarianism.

With winter only a few months away, food security and freezing temperatures will put even more pressure on the leaders of one of the world's poorest countries.

These mounting stresses have the potential to worsen divisions, Kugelman said, though likely not enough to force any dramatic shift in policy.

"If the Taliban leadership start to feel very real threats to their political survival, then could they change?" he asked.

"Given that they are ideologically focused, that may not be the case." 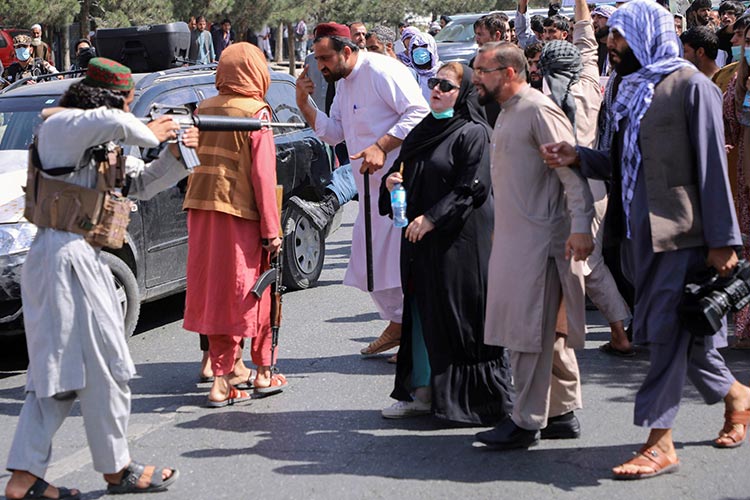 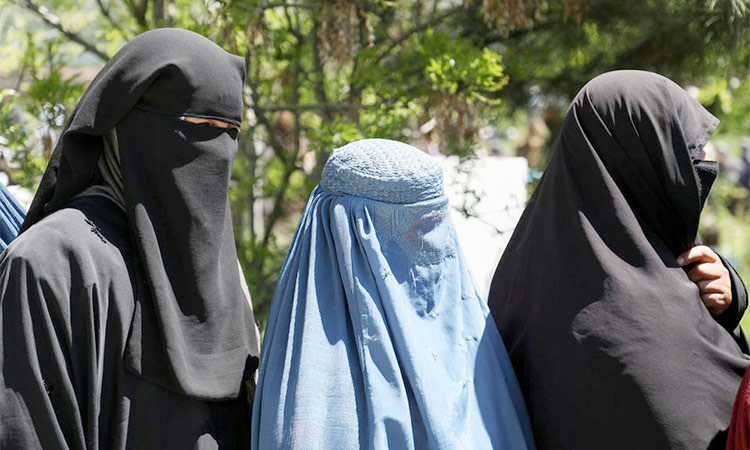 The decree evoked similar restrictions on women during the Taliban's previous hard-line rule between 1996 and 2001. "We want our sisters to live with dignity and safety,” said Khalid Hanafi, acting minister for the Taliban’s vice and virtue ministry. 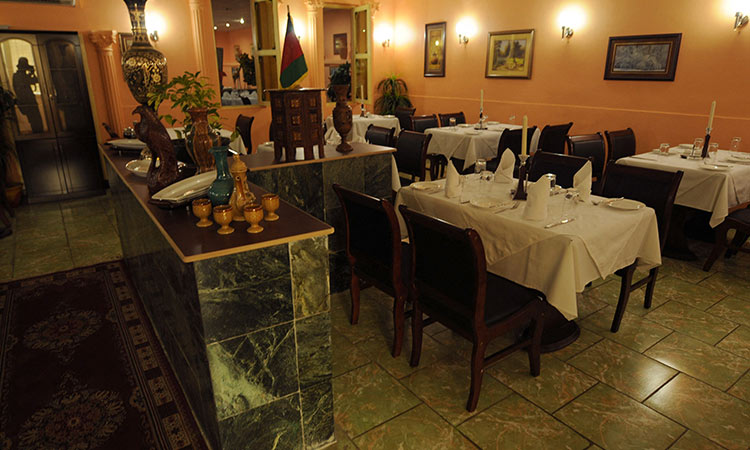