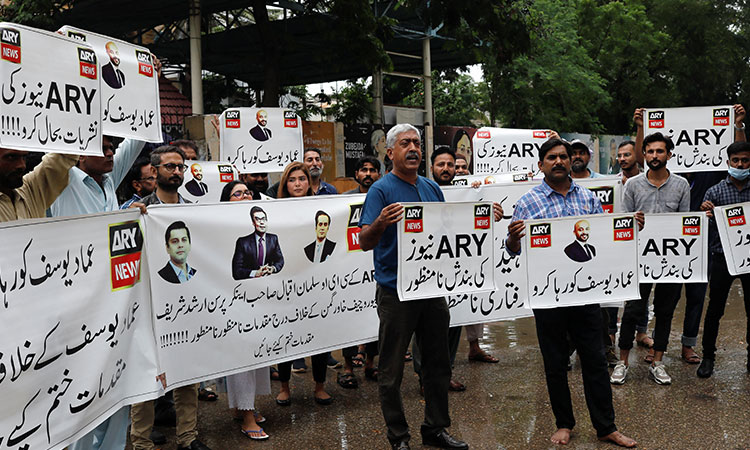 Members of the local media outlet ARY News carry placards as they protest against the taking of the channel off air in Karachi on Wednesday. Reuters

The owner of a Pakistan TV station critical of the government has been charged with sedition after airing comments on the military by an opposition politician, according to documents seen on Wednesday by AFP.

Three journalists with ARY News — a station that strongly backs former prime minister Imran Khan — have also been charged, while another was reported to have fled the country to avoid arrest.

Shahbaz Gill, the politician at the heart of the row and a senior official of Imran Khan's Pakistan Tehrik-e-Insaf (PTI) party, has also been arrested on similar charges.

Gill was handed over to police on a two-day remand by an Islamabad court on Wednesday.

He was produced before the court where the Islamabad police sought his physical remand to recover the mobile phone and the device, which he used to make statements. The police said that they also have to investigate on whose directives the controversial anti-Pakistan army programme was aired in which Gill allegedly incited mutiny in the military.

After a brief hearing, the court reserved the verdict, which was announced later giving Islamabad police two-day remand of Gill.

A case has been filed against the PTI leader at the Kohsar Police Station of Islamabad on behalf of the state over his seditious comments on a TV show.

ARY was taken off air over much of the country on Tuesday after the Pakistan Electronic Media Regulatory Authority (Pemra) accused it of broadcasting "hateful, seditious and malicious content."

Speaking on ARY Monday, Gill said junior officers in the armed forces should not follow orders that went against "the will of the majority."

"You must assess that your patriotism is not at stake... and you are not following an illegal and unconstitutional command," Gill said.

A day later ARY broadcast a detailed apology saying Gill's comments were a personal opinion that had nothing to do with the channel.

A notice from Pemra seen by AFP on Tuesday said Gill's comments were "tantamount to inciting the rank and file of the armed forces towards revolt."

After the arrest of Gill, Imran vowed to fight because it was not politics but Jihad. He told a TV channel that Gill was abducted and not arrested by police as required under the law. "If Gill had broken any law he would have been put in jail, but his car was damaged and his driver was beaten up.”

"Can such shameful acts take place in any democracy?" Imran said in a tweet.

Similarly, Khan said the government committed atrocities on May 25 when he had sponsored a long march on to Islamabad to force early elections. "We are struggling for real freedom and arrests are a small price for that.”

Meanwhile, former interior minister Sheikh Rasheed Ahmed has warned the government that attempts to arrest Imran Khan or break the PTI would trigger bloody politics in the country.

"The security of the country is more important than politics and power, adding that the instability in Afghanistan will also affect peace in Pakistan. Extortion and suicide attacks have started in the country,” he said in a tweet.