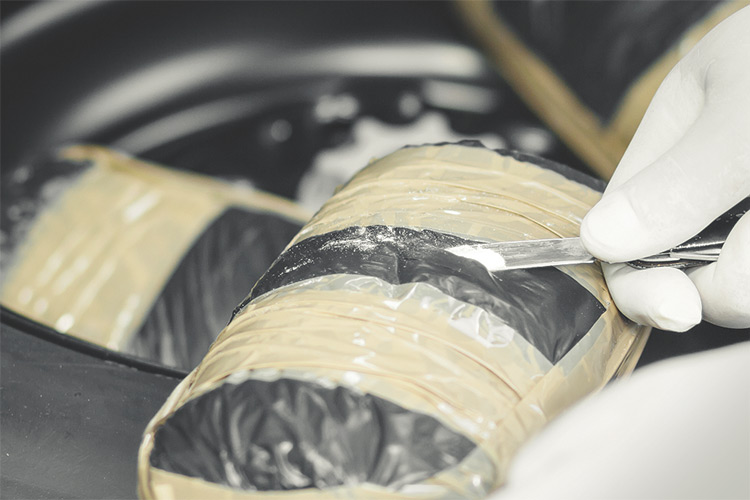 The Customs found 2,051 grammes of cocaine in passenger’s suitcase at the Abu Dhabi International Airport.

The customs officials suspected the suitcase after they noticed that its inner part did not look normal.

As soon as the Abu Dhabi Customs searched the female passenger’s suspected bag they found a hidden compartment in the inner part of the suitcase, which was professionally sewn. The compartment contained four transparent plastic bags with a white substance inside that was proved later to be cocaine and weigh 2,051 grammes.

The General Administration of Customs in Abu Dhabi, in co-operation with its concerned partners, is constantly developing work plans and programmes to address the risks of drug smuggling. It seeks to improve the efficiency of its personnel through specialized training and qualification programmes, enabling them to keep playing their role in confronting illegal smuggling attempts through the emirate’s customs ports. It also seeks to develop inspection capabilities by providing its customs stations with the latest global detection and inspection devices based on artificial intelligence techniques with the aim of fulfilling the vision of Abu Dhabi Customs of being a leading customs authority worldwide in an effort to enhance security, facilitate trade and provide distinguished services

The Dubai Criminal Court on Sunday sentenced an African worker to 10 years in prison and fined him Dhs50,000 over attempting to export 3 kilogrammes of drugs stuffed inside children’s toys to a foreign country through a shipping company. The convict will be deported after serving the terms, the Court ordered.