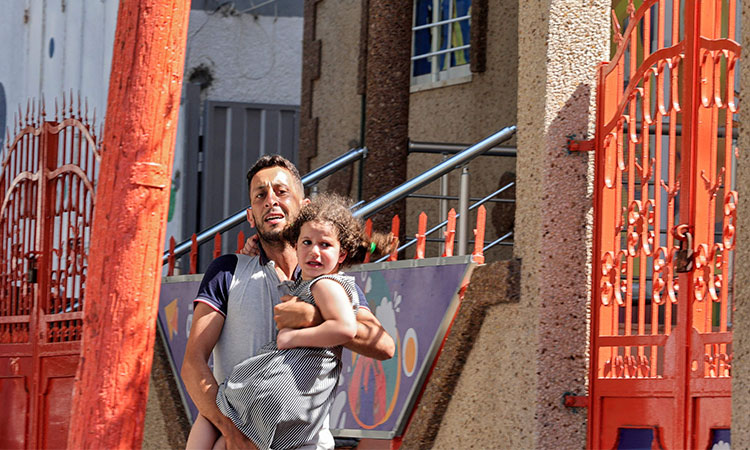 A Palestinian man carries his daughter after evacuating his home during an Israeli air strike in Gaza City on Sunday. AFP

Israel and Palestinian authorities have agreed to observe a truce in Gaza from Sunday evening as proposed by Cairo, sources said, after a weekend-long pounding of Palestinian targets by Israel.

The Palestinian Islamic Jihad announced its acceptance of a truce agreement with Israel, through the mediation of the Egyptian authorities.

The head of the political department in the Islamic Jihad Movement, Mohammad Al-Hindi, said in a statement: A short while ago the wording of the Egyptian truce agreement was reached, including Egypt's commitment to work for the release of the two prisoners, Basem Al-Saadi and Khalil Awawda."

Sources said that Israel and the Palestinians agreed to abide by a truce in Gaza starting from Sunday evening, pursuant to Cairo's proposal, after Israel bombed Palestinian targets since last Friday, which prompted the militants to target its cities with long-range missiles.

An Egyptian security source said that Israel had agreed to the truce offer, and a minister in the Israeli government indicated that reaching a truce agreement had become very imminent.

The death toll from violence in Gaza had risen to 41 on Sunday, including six children, as Israel pressed on with its bombardment of Palestinians who have retaliated with barrages of rockets.

It said the victims had been killed since Friday in Israeli strikes that also wounded 215 people. Israeli authorities deny blame and say the children were killed on Saturday by a rocket fired by Gaza Palestinians towards Israel that fell short.

The updated count from health authorities in the Hamas Islamist-run territory said six children were among those killed since the start of the "Israeli aggression" on Friday, in addition to 204 people injured.

But Israel said it had "irrefutable" evidence that a stray rocket from Islamic Jihad militants had been responsible for the death of multiple children in Jabalia, northern Gaza, on Saturday. 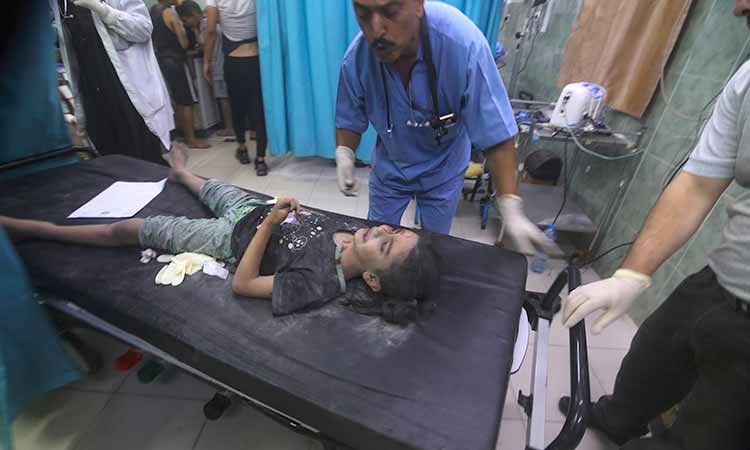 Medics treat a wounded girl at the al Najar hospital following an Israeli airstrike in Rafah on Saturday. AP

Meanwhile, air raid sirens sounded in the Jerusalem area on Sunday, the army said, as Palestinians in the Gaza Strip continued to trade fire with Israel for a third day.

Earlier, twenty members of the Palestinian group Islamic Jihad were arrested overnight by Israeli security forces in the West Bank, the army announced on Sunday, as renewed violence flared in the Gaza strip.

In several raids around 20 suspects belonging to Islamic Jihad were brought in from around the West Bank, the army said in a statement.

The violence is the worst in Gaza since a war last year that devastated the impoverished territory — home to some 2.3 million Palestinians — and forced countless Israelis to seek shelter from rockets.

Israel's military has warned its latest aerial and artillery campaign against Islamic Jihad could last a week, but Egypt's President Abdel Fattah Al Sisi said Cairo was talking "around the clock" with both sides to ease the violence. 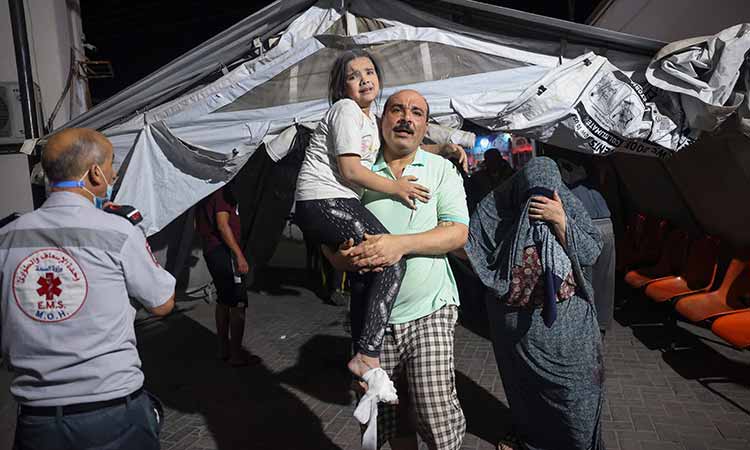 Palestinians carry an injured girl after an Israeli strike in Rafah in the southern Gaza Strip, late on Saturday. AFP

Israel has said it was necessary to launch a "pre-emptive" operation against Islamic Jihad, as the group was planning an imminent attack following days of tensions along the border with Gaza.

The head of the army's operations directorate, Oded Basiok, said the entire "senior leadership of the military wing of the Islamic Jihad in Gaza has been neutralised" by Israel's campaign.

That includes Taysir Al Jabari, a top militant commander killed in Gaza City on Friday, and Khaled Mansour, who Islamic Jihad confirmed died in a strike in Rafah, southern Gaza on Saturday.

A total of eight people were killed in the Rafah strike, including a 14-year-old, according to Gaza's interior ministry. 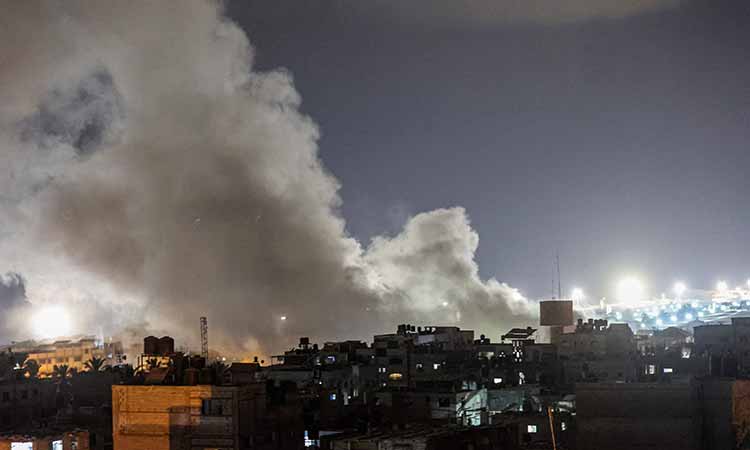 Smoke billows from the site of a reported Israeli strike in Rafah in the southern Gaza Strip on Saturday. AFP

Daily life in the strip has come to a standstill, while the electricity distributor said the sole power station shut down due to a lack of fuel after Israel closed its border crossings.

Gaza's health ministry said the next few hours will be "crucial and difficult", warning it risked suspending vital services within 72 hours as a result of the lack of electricity.

'We are all alone'

In Gaza City, resident Dounia Ismail said Palestinians had become accustomed to preparing a "survival bag" of items such as money and medicine.

"This latest escalation brings back images of fear, anxiety, and the feeling that we are all alone," she told AFP. 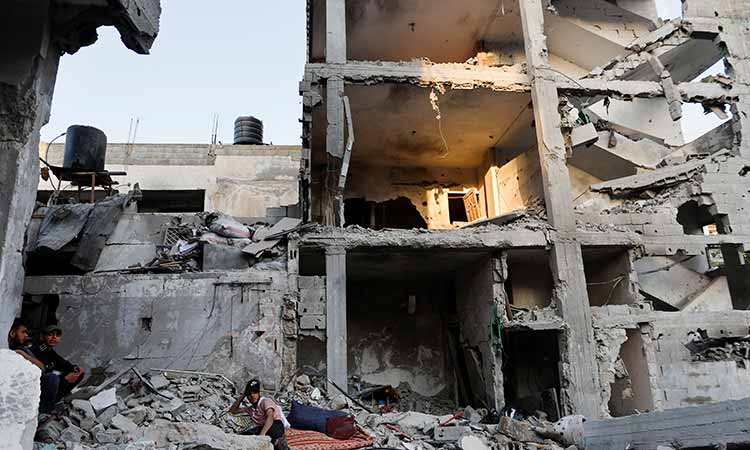 Palestinians gather at a building after Israeli strikes in Rafah in the southern Gaza Strip, on Sunday. Reuters

Civilians in southern and central Israel, meanwhile, have been forced into air raid shelters since Friday.

The Magen David Adom emergency service said two people were hospitalised with shrapnel wounds and 13 others were lightly hurt while running for safety. 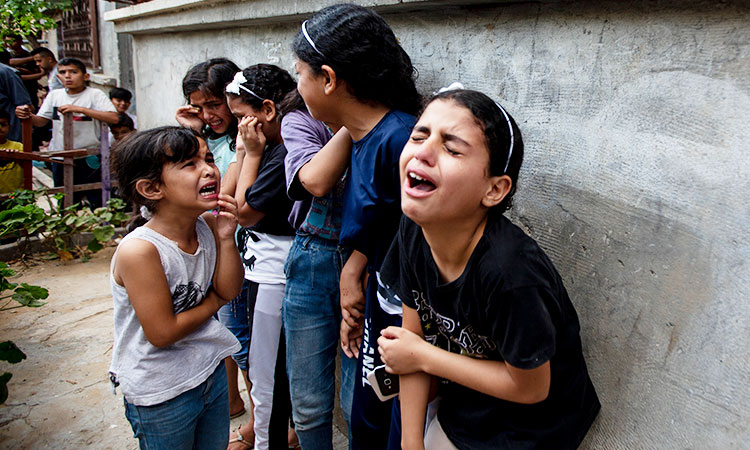 In Kibbutz Nahal Oz, an Israeli community beside the Gaza border, resident Nadav Peretz said he had been "in the bomb shelter or around it" since Friday.

"We recognise that on the other side too there is an uninvolved civilian population, and on both sides children deserve to enjoy their summer vacation," the 40-year-old said.