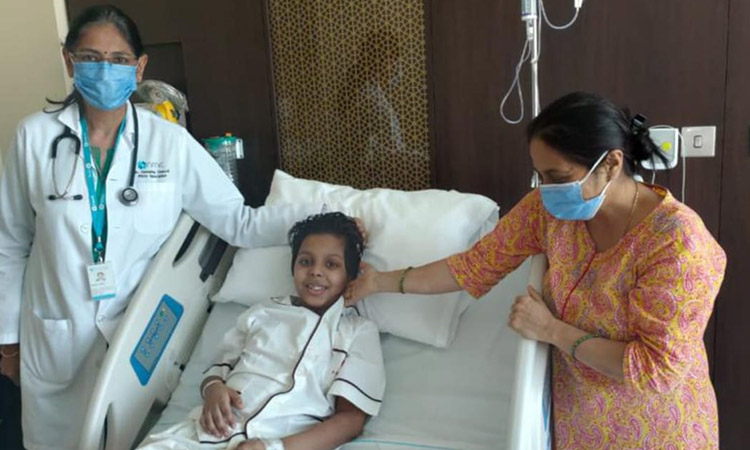 A smiling Nikhil after the operation.

Doctors in a private hospital in Sharjah have saved the life of a young Grade 9 boy.  For the Lakhwanis – Praveen Lakhwani, 49, and Tanu Lakhwani, 45 – staying in the UAE for the last 15 years, April 5 was like any other working day. Praveen, who works as a pharmaceutical sales professional came back from work and noticed his son complaining of fatigue and weakness. They found nothing unusual as the summer was on the cards and kids get exhausted at the end of the day. Furthermore, their son Nikhil, age 12, had just recovered from an upper respiratory infection about two weeks back. 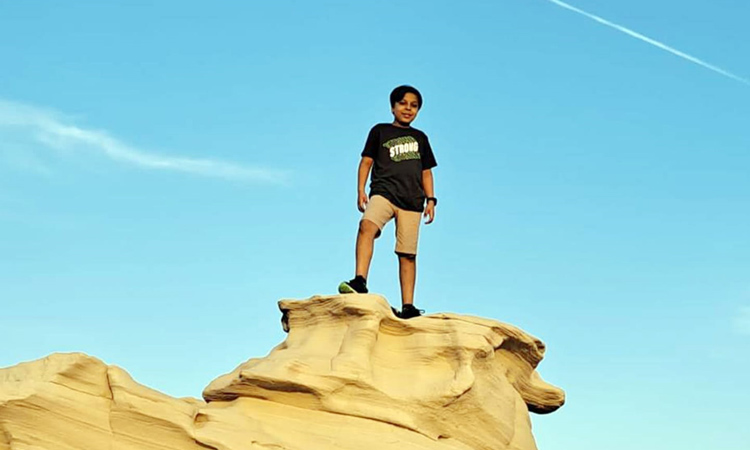 A happy Nikhil three months post operation. He started out with ascending paralysis to trekking mountains.

Things quickly started getting worse for Nikhil as he complained of persisting pain in the legs. Fearing an uncomfortable night and suspecting an injury, his parents took him to a local orthopaedician in their neighbourhood who after conducting relevant tests ruled out any orthopaedic issue.

The beginning of an ordeal

Since the pain was progressing, he suggested they take Nikhil to a specialised centre and referred him to the emergency department at NMC Royal Hospital, Sharjah for the diagnosis and the appropriate treatment. Once Nikhil was admitted, the paediatrician on call quickly concluded it to be a neurology case.

Dr. Manoj Singh, Consultant Paediatric Neurology at NMC Royal Hospital Sharjah, said, “Nikhil had no nerve reflex and had muscle power of Grade 2/5 in the lower limbs and Grade 4/5 in the upper limbs. The clinical picture was typical of severe and rapidly progressing Guillain-Barre Syndrome (GBS). Upon confirming the diagnosis with the help of an MRI & Nerve Conduction Study, we immediately transferred him to the paediatric ICU to initiate the treatment as his condition started getting worsening.”

Specialist Paediatric Intensive Care, Dr. Deepika Gandhi of NMC Royal Hospital Sharjah, explains, “It is a rare and an uncommon condition. Guillain-Barre Syndrome (GBS) occurs in all age groups. Adults are affected more commonly than children. The overall incidence has been estimated to range from 0.4 to 2.4 cases per 100,000 per year. We diagnose less than 10 every year.

With the widespread eradication of polio, GBS is the most common cause of acute and subacute flaccid paralysis in infants and children. Like what we saw in Nikhil’s case, it is frequently preceded by an unspecified infection.  This disease is also called ascending paralysis. It starts with the toes and ascends upwards while the recovery happens in the reverse direction.

Breathing improves first and the last would be the legs. The time factor is critical as the disease progresses fast, hence an early diagnosis and prompt care can save a life and minimise the impact of the disease. However, IVIG (Immunoglobulin) and plasma exchange have made a significant change in the course of the illness – the treatment protocol also chosen for Nikhil."

After hospitalisation, despite treatment Nikhil continued to deteriorate. He became completely paralysed (Power 1:5 in all four limbs) and developed respiratory failure also.

Initially, his disease progression seemed to slow down, and he was transferred to a ward after 5 days of PICU (Paediatric Intensive Care Unit) support. However, his muscle weakness gradually increased with an inability to swallow and he needed to be put on a ventilator for respiratory failure.

Nikhil’s mother Tanu said, “We were explained that our son’s paralysis involved his breathing muscles and the muscles of his throat. He was not able to swallow and was choking on his own saliva. The doctor told us what lay ahead for us in the days to come. She said that the disease was progressive, and it will take a while for the debilitating muscle strength to reverse.

It will become severe first, then plateau and thereafter he shall start improving. It may be weeks before he starts walking again even if he gets discharged. It will be a few months before he resumes his normal functions with the same ease as before. So, we prepared and felt supported.”

“With the progression of the disease, despite the treatment, Nikhil started having many medical problems. He developed kidney stones because of prolonged muscle paralysis leading to bone demineralisation, developed muscle pain and leg pain, and suffered from irregular heart rate with BP fluctuations. In addition to the muscle weakness, GBS affected many other organs," said Dr. Deepika.

Nikhil’s mother Tanu recalls, “It was so heartbreaking to see him always in pain, wherever one touches him. The doctor explained to us that it is not neurological, and it is not real, but he is feeling the pain as his nerves are behaving abnormally. All of this was so tormenting as our child was completely normal before this disease took over.”

The path to recovery

As his muscle power started improving, he was removed from the ventilator,” explained Dr. Deepika who led the team of paediatric superspecialists in their battle to bring back Nikhil to the path of recovery. The hospital has recently inaugurated its all-new wing of paediatric super specialities with neonatal and paediatric ICUs, all under one roof for better care pathways.

The parents were relieved that Nikhil was off the ventilator and was showing improvement, yet they were apprehensive on the timeline of his full recovery. With some hard work by his physiotherapists on his muscle strength and breathing, Nikhil started to take small steps with support showing his team of caregivers and family the initial signs of recovery.

Finally, on May 10, after spending 35 days in hospitalisation, the time came when all paediatric super specialists taking care of Nikhil agreed to discharge him with the advice to continue with his physiotherapy sessions.

After 3 weeks of going back home, Nikhil walked for the first time, unaided. And, within three months of recovery, he can run, jump, cycle, climb easily.

Nikhil shared with his mother that he remembered everything of his hospitalisation except the deep sedation period during which he was on ventilator.

"As a parent, our mind is so sensitive when it comes to our children and it's very difficult to sometimes remain rationale in such situations. Nikhils recovery is a good testimonial of reference for anyone who gives up hope in despair.

He started out with ascending paralysis to trekking mountains with me. It is story of hope and perseverance", said Praveen Lakhwani – Nikhil’s father.